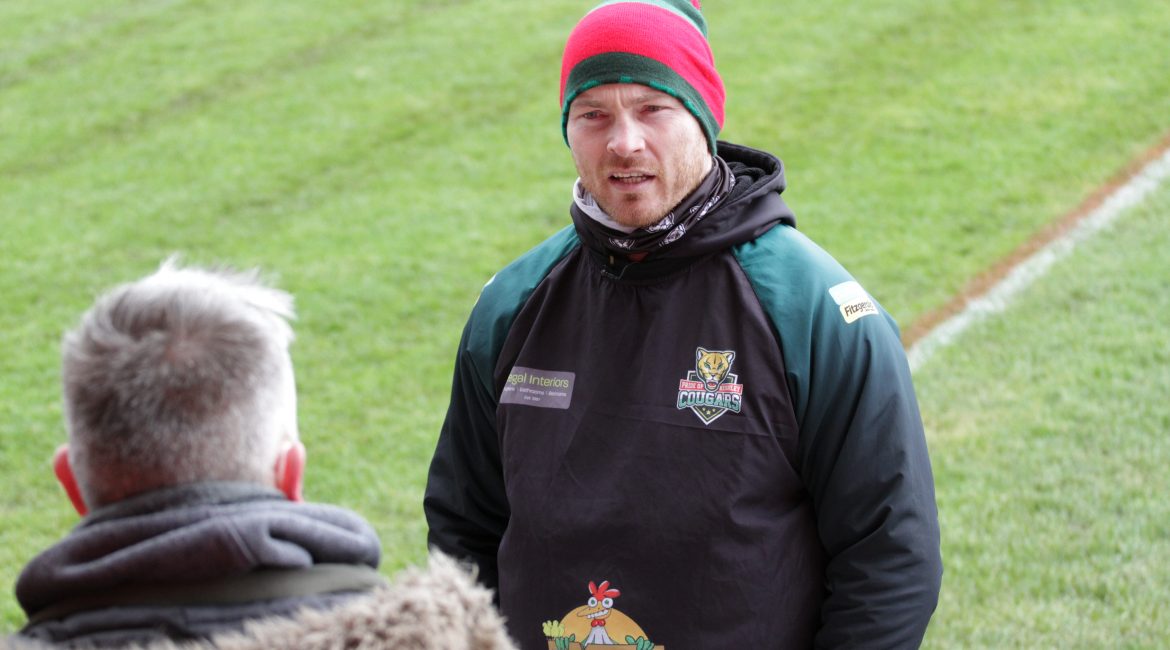 HEAD Coach Rhys Lovegrove believes the Keighley Cougars away day blues is down to the players mentality.

Friday’s defeat away at the Coventry Bears was the clubs ninth consecutive away defeat, meaning the club have not won away from Cougar Park since a victory over the Bears in August 2019.

Visibly emotional following the game on Friday, Lovegrove was left with plenty to think about as the side continued their travel woes ahead of another two away trips over the next fortnight to Hunslet and Rochdale.

“I’m growing increasingly frustrated with the performances and losses we keep dishing up away from Cougar Park,” admitted the Cougars Head Coach.

“We had a look at a couple of things that I noticed were happening at North Wales, so we thought we nipped that in the bud, but the same thing happened tonight.

“So, unlike we thought it was, it isn’t a physical thing it clearly is a mental thing.

“You can’t win your home games but lose your away games because that’s not how Rugby League works.

“These players need to get away from their comfort zones because it is becoming increasingly obvious that at home, they are comfortable, they are confident, they know where they are and what they are doing.

“We are below the expectations that we put on ourselves as a team, as a group, and as Keighley Cougars the organisation. It’s simply not good enough.

“We’re going to sit down at training this week and have a look at things in a little more detail and there will be more ruthlessness shown with certain aspects of our preparation and performance.”

Analysing the game as a whole, Lovegrove believes the players once more overthinking the systems and style of play implemented by the coaching staff was the one factor that contributed to the defeat and the performance at the Butts Park Arena.

“If I had to pinpoint one factor for the defeat it would again be the overthinking the simplicity of winning Rugby League games, which again comes back to our mentality.

“What allowed us to defeat Barrow so convincingly last week wasn’t the big stuff, it was the small stuff.

“But for some unknown reason, this team continually overthinks the situation and comes up with performances like that. Away from home especially.”

Previewing next weekend’s trip to the South Leeds Stadium, Rhys had already begun preparations immediately following the conclusion of the Coventry game and knows what his side needs to put right.

“They need to work harder in regard to getting their mindset for away games right.

“The team works hard physically, they train hard, and I will always back them to the hill.

“They’re a hard-working group and you don’t become a bad team in just one week. We know it is there, we saw it against Barrow.

“We need that confidence we show at home and transmits onto the field to be shown when we play away.

“These are semi-professional athletes that for some reason when we play away allow things out of their control such as the bus being stuck in traffic or their coffee order at the services being wrong to creep into their performances.

“It then reflects on the field, and we need to nip that in the bud now.”

Top try-scorer Brenden Santi was a noticeable absentee on the night after he was ruled out through a shoulder injury, with the Italian international also expected to miss next Sunday’s local derby away at Hunslet.

“To lose Brenden as a player, but to also lose him as a person, was a massive blow in the lead up to this game.

“When you look at the performance that got tossed up and what we lacked in certain aspects of our game, it is no surprise that those aspects are usually represented by Brenden Santi.”

Lovegrove’s final summary of the evening complemented the opposition but was to the point regarding his personal thoughts on the result.

“Coventry were good value for their win, they were enthusiastic and moved the ball well.

“You could make excuses such as our short turnaround, Coventry have had an extra week to prepare for this game, but ultimately there is no excuse that could bare up to our level of performance.

“It’s not even up for discussion whether we should be winning these games or not and it is one of the very few times since joining the club that I have been left absolutely fuming with a result and a performance.”