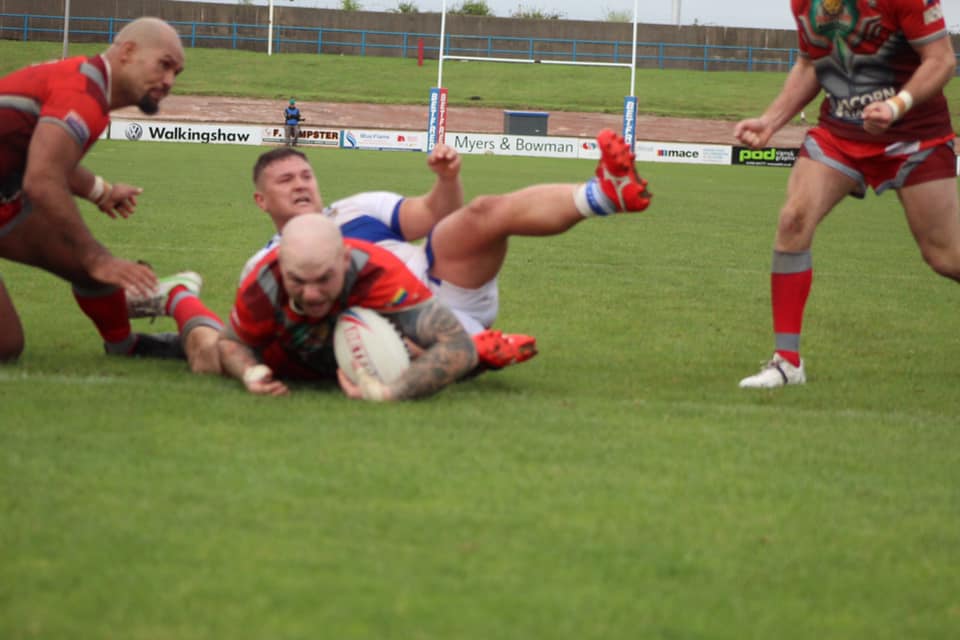 KEIGHLEY Cougars saw their hopes of having a home final at Cougar Park dashed in golden point extra-time by Workington Town.

On the back of an error strewn first half, the Cougars second half performance was dogged and determined and saw them dramatically level the game in the final minute through Kyle Kesik’s first try of the season.

However, after allowing the home side to retrieve their own kick-off as extra-time began, Carl Forber secured progression and home advantage for Workington with a penalty conversion for a high tackle.

Backed by a healthy travelling support in the strong winds and driving rain of west Cumbria, Keighley were slow out the traps as the home side broke the deadlock inside three minutes.

Workington forced a knock-on near to the line and from the set restart, they pressured early into the set allowing Caine Barnes to power his way over from close range.

The Cougars though would level almost immediately in unusual circumstances.

After Alex Young comfortably took possession of the ball from a kick, the Keighley kick chase pressured him back in goal.

With it looking like a dropout was the likely outcome, the ball came loose, and Jack Miller reacted quickest to pounce for the try.

Dec O’Donnell nearly restored the Town lead but was held up, the second home score coming from the play on the ten-metre line.

After a big hit on Conor Fitzsimmons by Jake Webster, the two players would become entangled in back play with players from both sides getting involved.

But whilst waiting for a whistle that would not sound, Brad Holroyd took full advantage of the gap left in the defensive line to weave through and score with ease.

The Cougars then had a sustained period of pressure near to the line but couldn’t turn it into points.

Then another handling error gave the home side field position, and they took advantage as Barnes made the most of an inside pass to turn through and tackle and get over for his second try of the afternoon.

Both sides had further opportunities to score before the break but neither side could find a way back over the line.

The second half began with Rhys Lovegrove’s side finding a route back into the game.

After forcing a knock-on, Miller created space in the defensive line and fed Charlie Graham through the gap as the centre raced to the line and dived over.

This lit a fire within the visitors, and they pushed for the score that would level the game.

The Workington defence though continued to match the red siege heading towards them and keep it at bay.

Mo Agoro would touch down in the right-hand corner, but the effort was disallowed as the touch judge ruled that his foot had made contact with the sideline as the winger grounded the ball.

With the clock winding down, scenes of jubilation followed with little over a minute remaining.

A kick on the last from Miller dropped onto the Workington line, and with a number of jumping bodies from both sides failing to catch the ball it would fall into the hands of Kesik who crashed over in front of the ecstatic Keighley support.

The Cougars won the toss and opted to receive possession, but the bounce of the ball from the kick-off allowed Workington to retrieve the ball and have a fresh set 30 metres out from the line.

The referee then blew up for a high tackle ten metres out, allowing Forber to seal the win.