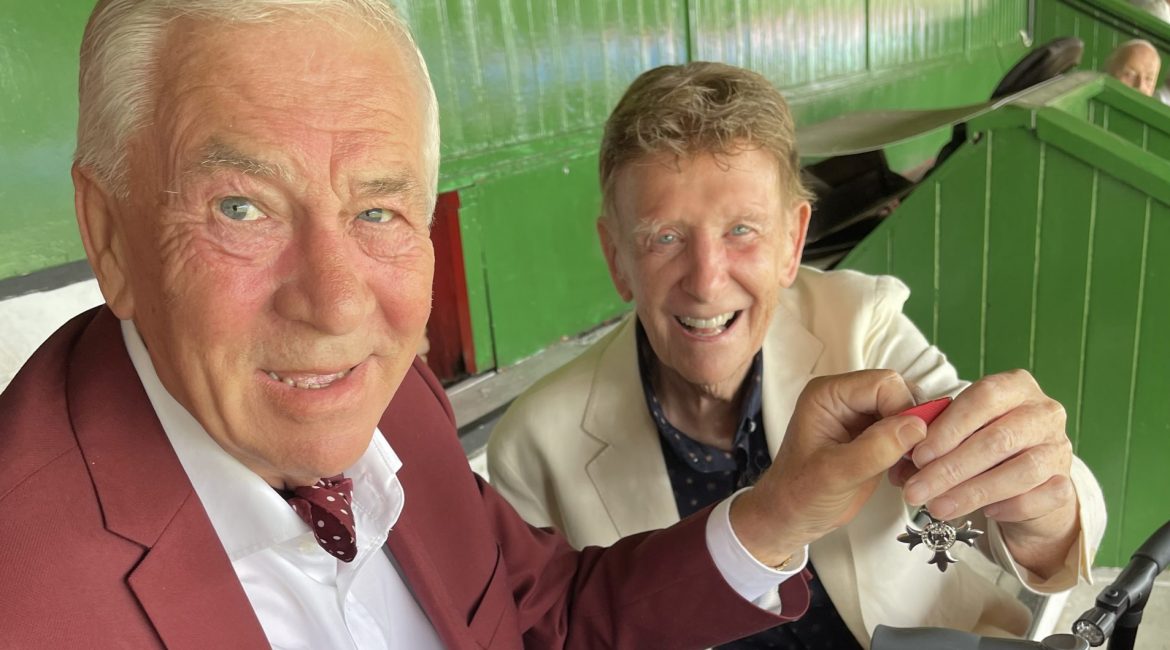 Keighley Cougars Chairman Mick O’Neill was presented his MBE earlier in the month and is delighted with the accolade.

Awarded the honour as a part of the Queen’s 2021 New Year’s Honours, Mick was recognised for his services to Rugby League Football, the community in Keighley, and to Charity during the Covid-19 pandemic.

And he was finally bestowed his MBE by the Princess Royal, Princess Anne, at Buckingham Palace a fortnight ago.

However, after the second lockdown prevented an immediate presentation of the award to O’Neill, he nearly never made it to the palace after his own fight with Covid-19.

After fighting the infection, and for his life, at Airedale Hospital earlier this year the Keighley Cougars chairman has admitted previously he is just glad to be alive and able to see the clubs successful season to date.

But despite his own personal journey to this moment, Mick has dedicated and shared his MBE with long term friend and partner Mike Smith.

Smith, like O’Neill, was left fighting for his life during the off-season following an aggravated burglary at his home.

Winning his own personal fight for life, Mike is now well into his rehabilitation process and like Mick is again a regular face at Cougars games both home and away.

And Mick O’Neill MBE believes it is only fitting that he shares his MBE accolade with his long-term partner.

“To be awarded an MBE was a massive honour, but it is only right that I share it with Mike.

“What the two of us have been through together at the Cougars with the highs of Cougarmania, the disappointment of not making the Super League, and the resurgence of the club since our return despite the pandemic, has created an unbreakable bond.

“The hard work put in and the plaudits and accolades given for that hard work are as much Mike’s as they are mine.

“Both me and Mike have gone through a different sort of battle this year but again, we both survived and came back fighting which is a spirit embodied by the club as a whole.

“It is an honour to share my MBE with Mike and hopefully the boys can keep delivering on the pitch so we can have a proper celebration in a month’s time.”

The two go way back having originally took over control of the club in the early 90’s and leading the club through its most successful period known as Cougarmania.

Winning the Third Division title in 1993 before adding both the Second Division championship and premiership in 1995, the two returned to save the club three and half years ago along with Mick’s son Ryan, and son-in-law Kaue.

The pair have again overseen a revival of the club with the team top of League 1 with six weeks of the season remaining having won all 15 games so far this year.