Keith Dixon on THAT Old Trafford title win 25 years on 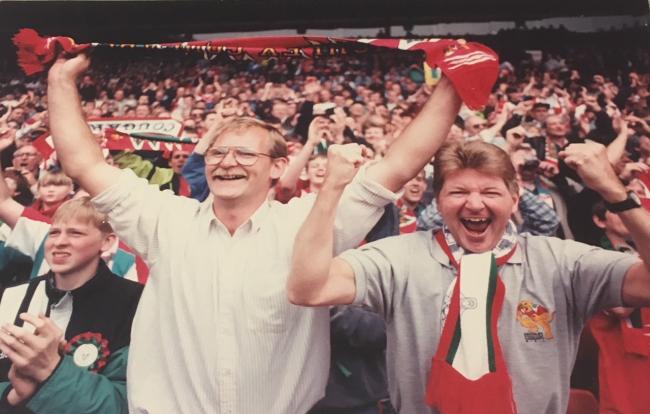 NEXT week marks the 25th anniversary of one of the greatest sporting achievements accomplished by a team from the town.

That magnificent day at Old Trafford where Cougars beat Huddersfield 26-6 to be crowned Second Division champions, will forever go down in Keighley folklore.

Keith Dixon, who played at the club for 14 seasons from 1984, recalls his emotions.

What followed was the collapse of ‘Cougarmania’, which Mick O’Neil, Mike Smith and Neil Spencer created when they took ownership in 1991, after being rejected entry to the newly-formed Super League.

“We had done it by fair measures we won what we needed too. For players it was gut wrenching.

“I think we would have held are own in that division at that time but the powers at be were rugby league traditionalists.

“For them to decide without giving Mick and Mike a chance to state there case, it was definitely bad for the club and the community.”

Dixon joined Keighley in the dark times of the eighties where the club was suffering financially.

Offers from Bradford Northern, Leeds and even a football team came in but he decided to join his local side.

Dixon added: “I remember the headline in the Keighley News being: ‘Keighley sign local lad in front of Leeds, Bradford and Manchester City’.

“As a young kid you wanted a chance to play professional sport and fortunately I did that with rugby.”

Fast forward nine years and Dixon was part of the 1993 Third Division winning side.

The 63-year-old reminisces about those glory days and the impact they had in inspiring the town’s next generation of rugby talent.

“It was unbelievable when we won the Third Division that Good Friday.

“Going into schools when we did go full time and seeing the buzz.

“To see some of the children like Richard Moore go on to become Super League players it was great for the town.

“Give Peter Roe credit, he signed some great lads. The likes of Jason Ramshaw , Joe Grimmer and Martin Wood.

“We had a decent side already from 1993, but Phil (Larder) came in and put the icing on the cake.”

So as we embark on a quarter of century since that memorable day in Manchester, will we see a return to those exciting times?

With O’Neil and Smith back at the helm, Dixon thinks it is possible: “The town has got a bit of a buzz again.

“They say that people get their 15 minutes of fame, well hopefully Cougars can get half an hour.”