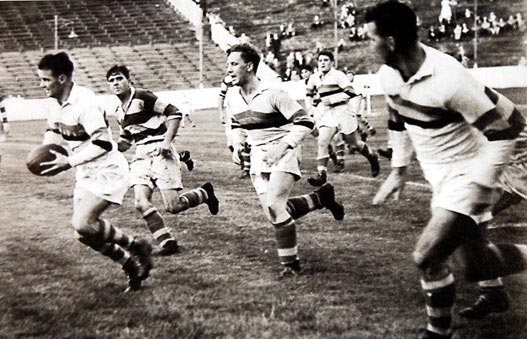 Non-competitive fixtures between the Cougars and the Bulls are contested for the Joe Phillips Memorial Trophy, with the Bulls the current holders following their victory in our last meeting for the trophy at Odsal Stadium in February 2018.

Originally a trialist for the All Blacks in Rugby Union, Joe Phillips first came to Britain in 1950 following the Second World War where he was one of three trialists signed by Bradford Northern.

He played for Northern until his departure from Odsal in 1956, scoring a total of 1,469 points as a goal-kicking full back.

In 1957, Joe signed with Keighley and would score 13 tries in his first season at Lawkholme Lane.

He would remain with Keighley until his retirement in 1960, scoring 516 points in 80 appearances for the club, and would become a director of the club after hanging up his boots.

After Bradford Northern went out of business in December 1963, Joe would become heavily involved with Trevor Foster in reforming the club in the spring of 1964 and became the first chairman of the new club.

Sadly, Joe died suddenly whilst in London on business in May 1969 with the two clubs later playing each other in friendly matches for the trophy named in his honour.