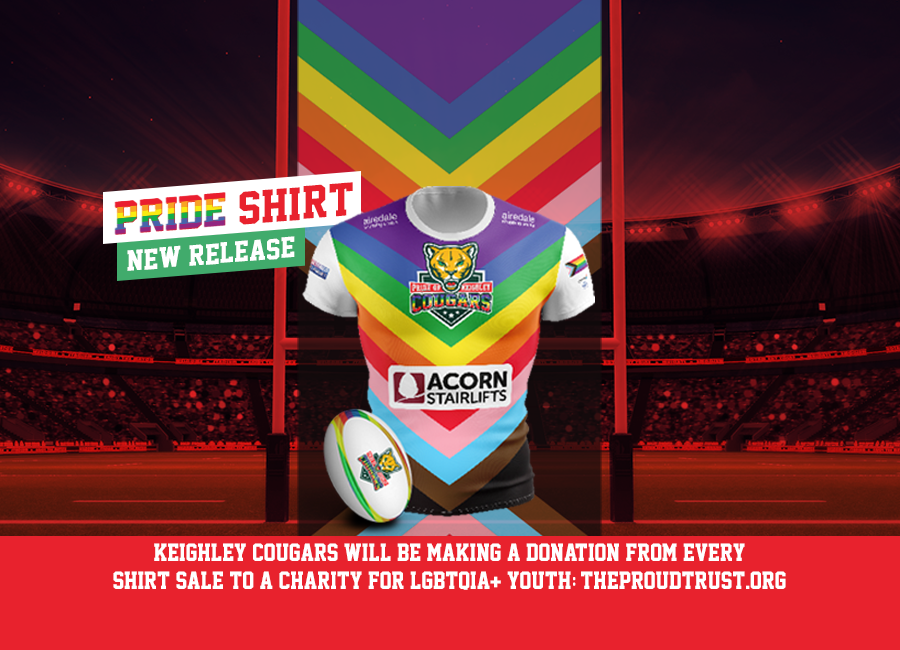 Next weekend (15th August) fixture against the Coventry Bears at Cougar Park will see the club host its second Pride festival following the historic first ever in professional sport in the United Kingdom against the West Wales Raiders in June 2019.

The #CougarPride21 jersey sees the shirt incorporate all colours and aspects of the LGBTQIA+ flag as seen on our 2021 playing kits as well as promoting equality, inclusion, and diversity for all regardless of your sexual orientation and race.

The #CougarPride21 jersey is priced at £25 with a portion from each sale being donated to The Proud Trust, a charity for LGBTQIA+ youth.

The Proud Trust can trace its roots back to the 1970’s and the Gay Youth Group that met in Manchester at Waterloo Place, then Bloom Street and from 1988, Sidney street purpose built Gay Centre.

The Organisation became a Company Limited by Guarantee in 2005 after extensive consultation with LGBT young people and youth workers across the North West.

LGBT Youth North West, as it was known then, set about addressing these main aims:

Between 2008 and 2011 the organisation took on Manchester’s LGBT services following council cuts.

In 2012 the organisation’s founder, Sally Carr received her MBE for services to LGBT Young people.

And in 2015 the organisation changed its name to The Proud Trust to reflect our aspiration that every young person can be proud of their identity, without fear or shame.

Keighley Cougars are proud to support The Proud Trust and their fantastic work with the charitable donations from each sale of our #CougarPride21 jersey.

The jersey is available to purchase online NOW by clicking HERE

Or alternatively, you can buy the jersey in the club shop from tomorrow’s game against Workington Town.