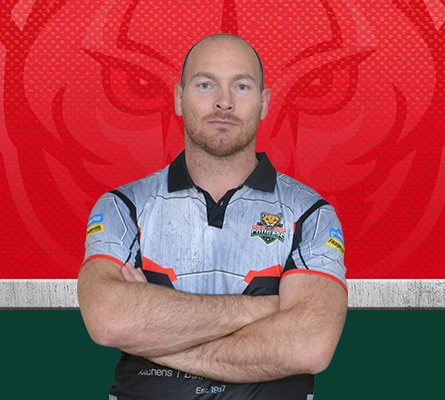 KEIGHLEY Cougars Head Coach Rhys Lovegrove has today announced the structure of his coaching, backroom, and medical, teams ahead of the 2021 Betfred League One season.

As a part of #SquadNumberSunday on the club’s social media channels, Lovegrove has also today revealed his staff structure ahead of the new year.

Dean Muir will continue as Assistant Coach with Matt Nicholson also continuing in his role as Head Trainer, which will see him don the yellow shirt on gamedays and assist both Rhys and Dean on both gamedays and training sessions.

The main re-structuring in the coaching staff comes with two new additions as well as two departures from the first team coaching set-up.

Following his move into a coaching role during the off season, club legend James ‘Buster’ Feather moves into an off the field role within the coaching staff focused on helping develop the Cougars younger players with his vast knowledge of both the game and Rhys playing systems.

Cougars Women’s Head Coach Dave Needham also moves into a coaching role within the men’s first team set-up whilst Phil Woodhead, who joined the club ahead of the 2020 season, will continue in his role as the Strength and Conditioning Coach.

The appointments of Buster and Dave by Lovegrove however means that Scott Lindsey and Liam Bowness have now both departed the club.

Both Scott and Liam were amongst the first and reserves team coaching staffs for a number of years and the club would like to place on record its thank you to both for their services to the club and wish them all the best in their future endeavours.

Off the field, Frank Levy will continue in his role as Team Manager, also taking on the role of the club’s COVID-19 officer, to overlook the operational side of the rugby department and also ensuring the players, and their families, wellbeing in the current clime.

The administration and media departments will once more be run by two stalwarts of the club in the form of ‘Team JC’ with Cougars Hall of Famer Jeremy Crowther and Joshua Chapman entering their 26th and 10th seasons with the Cougars respectively.

The highly qualified and experienced Judith Marples completes the backroom team in her role of Player Welfare Manager, 2021 will be Judith’s 4th year at Cougar Park.

The medical team will once more be led by Dr Richard Lawrance, the cardiology specialist now approaching a third decade with the club after relocating to Keighley to take a position at Airedale Hospital following a number of years living in Wrexham.

Head Physiotherapist Darran Miller will be assisting Richard once more, with ‘Daz’ now able to provide cover as Doctor, should Richard be unavailable, after qualifying as a Doctor earlier this year prior to the COVID-19 epidemic.

Bianca Nixon and Steph Petty complete the 2021 medical team as the club’s Sports Therapist and Team Masseur, ensuring that injured players are rehabilitated and returned to full fitness to give the side the best possible chance this season.