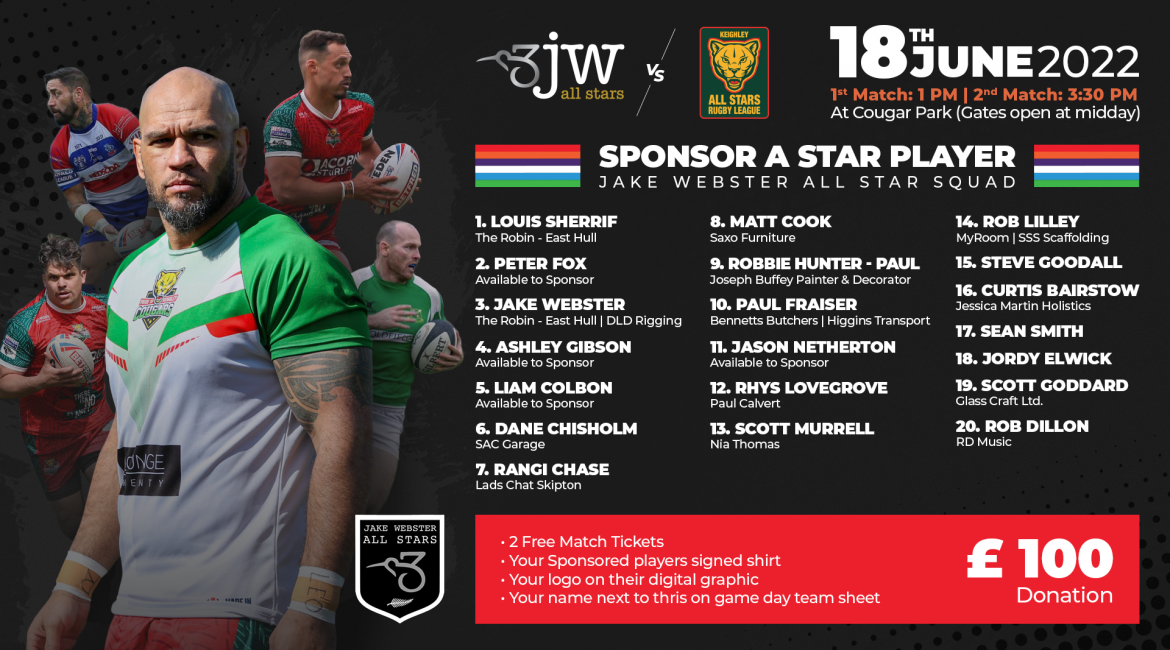 The Jake Webster All Stars have today named a 21-man squad ahead of tomorrow’s All Stars game at Cougar Park.

Webster, a Tri-Nations winner with New Zealand and League Leaders Shield winner at Castleford, is one of twelve current or former professionals within his team.

A legend of the game in Robbie Hunter-Paul, a teammate of ‘Snakey’ in the Kiwis side of the early to mid-noughties, will dust of the magic boots that served him so well in a trophy laden career with the Bradford Bulls.

Also joining Jake in the side is Rhys Lovegrove, his former teammate at Hull Kingston Rovers and current Head Coach at the Keighley Cougars.

Other former Robins teammates include Scott Murrell, who is currently a teammate of Webster’s once again at the Cougars.

Matt Cook, who retired from the sport last year, will also pull on a jersey for Jake as will Peter Fox, who won international recognition with England during his time at Craven Park.

Another winger in the shape of Liam Colbon, back-rowers Jason Netherton and Scott Wheeldon, and full back Louis Sheriff, who also played with Jake at Keighley, also help make up the contingent of former Hull Kingston Rovers players in the squad.

‘Chizzy’ will form a deadly half-back partnership on the day with Rangi Chase, another close friend of Jake’s who was the Super League Man of Steel during his days at the Castleford Tigers.

Ashley Gibson, who played at the top level for four different clubs before retiring after a spell with Newcastle, completes the line-up of professionals in the side.

Another good friend of Jake’s Paul Fraiser, his main testimonial sponsor, will start the game at prop forward with Rob Lilley, a long-standing member of staff at the Castleford Tigers, also pulling on a jersey for Webster.

Rugby League All Stars regulars the shape of Steve Goodall, Sean Smith, and Scott Goddard will also be amongst those that the veteran centre can call upon on the day.