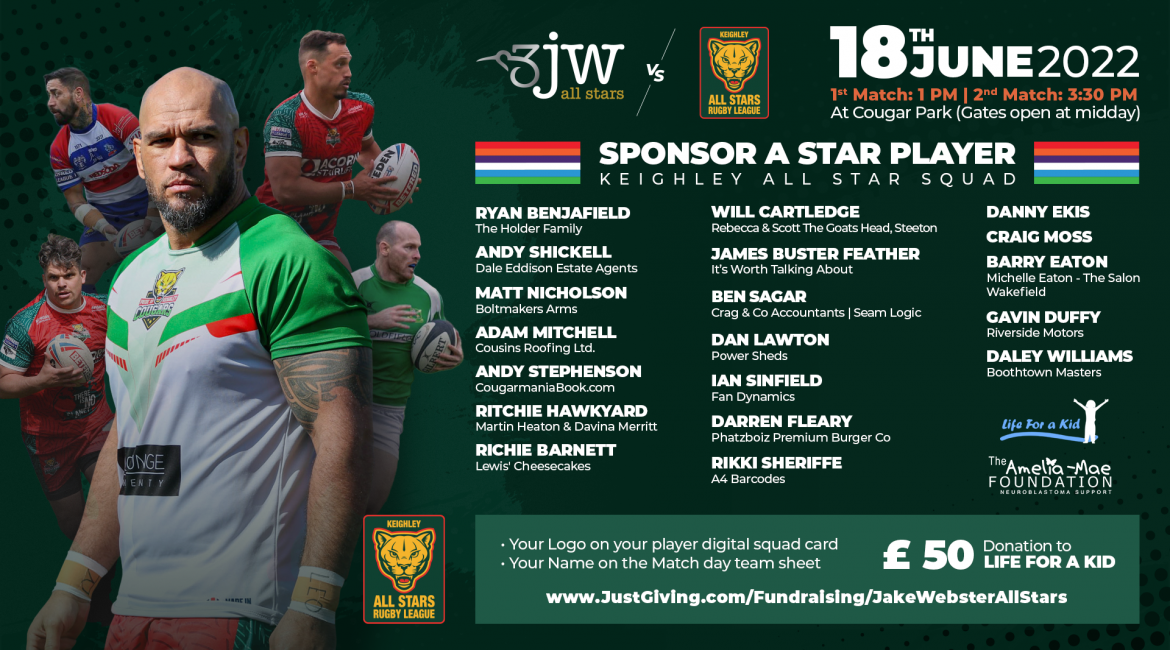 The Keighley Cougars All Stars have today named a 19-man squad ahead of tomorrow’s All Stars game at Cougar Park.

Alongside Barry will be Hall of Fame member James ‘Buster’ Feather, who has featured in all the Cougars Betfred League 1 fixtures so far in 2022 as he continues his 20th season as a player with the club.

The game will also serve as a reunion for those who played alongside Barry and Buster in the 2009 promotion winning squad.

Second-row forward Will Cartledge, who was a part of both the 2009 and 2011 promotion winning sides, and prop Ryan Benjafield will also dust off the boots to take to the field.

Speaking of the 2011 promotion winning team, Ben Sagar, who formed a deadly right edge partnership with Duffy that year, and his points scoring centre partner Danny Lawton will also be pulling on a Keighley jersey once more.

And those who helped take the Cougars into the second tier don’t stop there as Ian Sinfield and Danny Ekis, members of the 2003 National League Two champions team will also feature.

There will also be a serious sense of nostalgia as two members of the ‘Cougarmania’ squad from the nineties.

Andy Stephenson, father of current Cougars first teamer Alix, and Darren Fleary will be taking to the paddock in red, white, and green, one more time on Saturday afternoon.

Daley Williams, at his peak the best one-on-one ball stealer in the sport, will play at Cougar Park for a Keighley side for the first time since 2015.

He will be joined by two of his former teammates from the Championship side of the last decade in the form of Wales international full-back Craig Moss and towering winger Richie Barnett.

Half-back Adam Mitchell, who had three spells with the club as a player and a coach, comes back home to bring his trademark kicking game for the Cougarmaniacs in the stand once again.

Rikki Sheriffe, who played with the club for the final three years of his career before becoming an assistant coach under Craig Lingard, and his full-back from his time at the club Ritchie Hawkyard, who had two spells with the club before retiring in 2020, will also come back to Keighley for this game.

The squad is completed by current Cougars assistant coach Matt Nicholson, who has been with the club since April 2019.

All members of the Keighley Cougars All Stars team will wear the squad number 6 in tribute to the late Danny Jones.

6 – Will CARTLEDGE
Sponsored by The Goats Head, Steeton

6 – James FEATHER
Sponsored by It’s Worth Talking About

6 – Rikki SHERIFFE
Sponsored by A4 Barcodes