Sadiq Adebiyi To Join The Pride 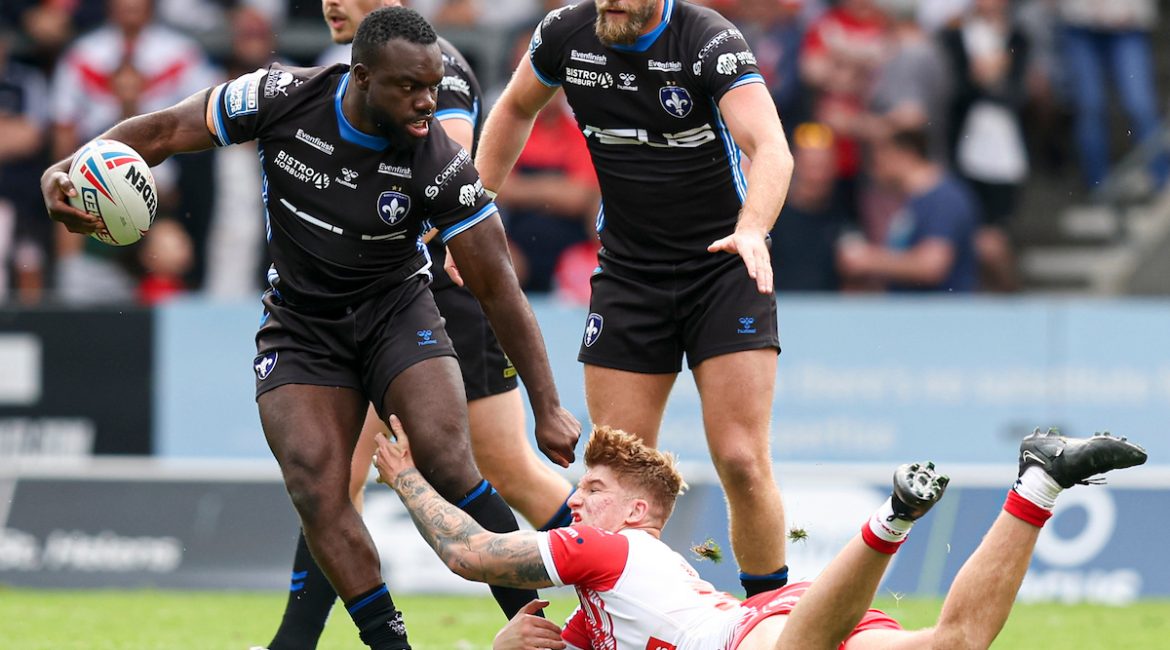 KEIGHLEY Cougars are today excited to announce the signing of Sadiq Adebiyi.

Leaving Belle Vue after just one season, the forward comes to Keighley having previously worked with Head Coach Rhys Lovegrove and Andrew Henderson at the London Broncos

The prospect of once again working with Adebiyi at Keighley is one that excites the club’s Head of Rugby.

“Sadiq is a first-class person and player,” said Henderson.

“I had the pleasure of working with Sid previously at the London Broncos and supporting him in his early stages of development as a first team player.

“Since then, he has established himself as a Super League standard player with both London and Wakefield.

“At only 25 years of age, he is in his prime now and ready to really kick on these next few years and further progress as a player.

“He is equally at home in the middle or the edge, and both can and will add some genuine strike power to our forward line.

“Rhys and I really pleased to secure the signature of Sid as we know he will add value to the organisation both on and off the field.”

Sadiq added: “I decided to join the club because having previously worked with Hendo and Rhys, the prospect of working with them again is one that I’m looking forward too.

“Also having seen what they achieved last season and their goals for this season in the Championship, the ethos of the club is something that I’m very excited about.

“To have another season like the club had last year would be something special and if we can achieve something like that again, I would love to be a part of it.

“I would like to see Keighley achieve a place in Super League and I hope I can play a part in that with the rest of the boys.

“This new challenge is something that I am excited for.

“It come at a time in my career when I have had some injuries and to get going again and start an incredible season here at Keighley is something that I am excited for.

“After having conversations with the club, it felt the right for me and I’m excited to see what we can achieve together.”

Born in Lagos, the Nigerian capital, the player affectionally known as ‘Sid’ was raised in London after moving to the capital at six years of age.

Beginning his career having received a first taste of Rugby League with the Richmond Warriors, his aptitude to the sport would see Sadiq earn a place on the London Broncos scholarship scheme.

Joining the Under-15’s team at the Broncos, he would rise through the ranks and be appointed the captain of the academy side.

Making his first team debut in 2015, Adebiyi would continue his development with dual registration spells at the Hemel Stags, Oxford, and London Skolars.

After a loan spell during the 2017 campaign with Oldham, a return to the capital saw the versatile forward become a regular in the side.

Establishing himself as a first choice forward under Danny Ward, Sadiq would help the side achieve promotion to the Super League and featured in the Million Pound Game victory over the Toronto Wolfpack.

Featuring either side of a loan move to the Sheffield Eagles, he and his teammates were unable to avoid relegation back to the second tier despite a valiant effort throughout the year.

Following the conclusion of that season, Adebiyi took the opportunity to represent the nation of his birth with both hands and proudly led Nigeria to victory in the Middle East-Africa Championship where he would score a brace of tries in the final against Morocco.

However, a combination of the pandemic and a serious injury to his Achilles would restrict his playing time in the two seasons that followed.

Ahead of the 2022 season, the versatile forward headed north to sign with Wakefield Trinity.

Only making three appearances during his time at Trinity, he spent part of the last campaign on loan at the Newcastle Thunder before leaving Wakefield upon the expiration of his contract to sign with the Cougars.