Robbie Storey To Join The Pride 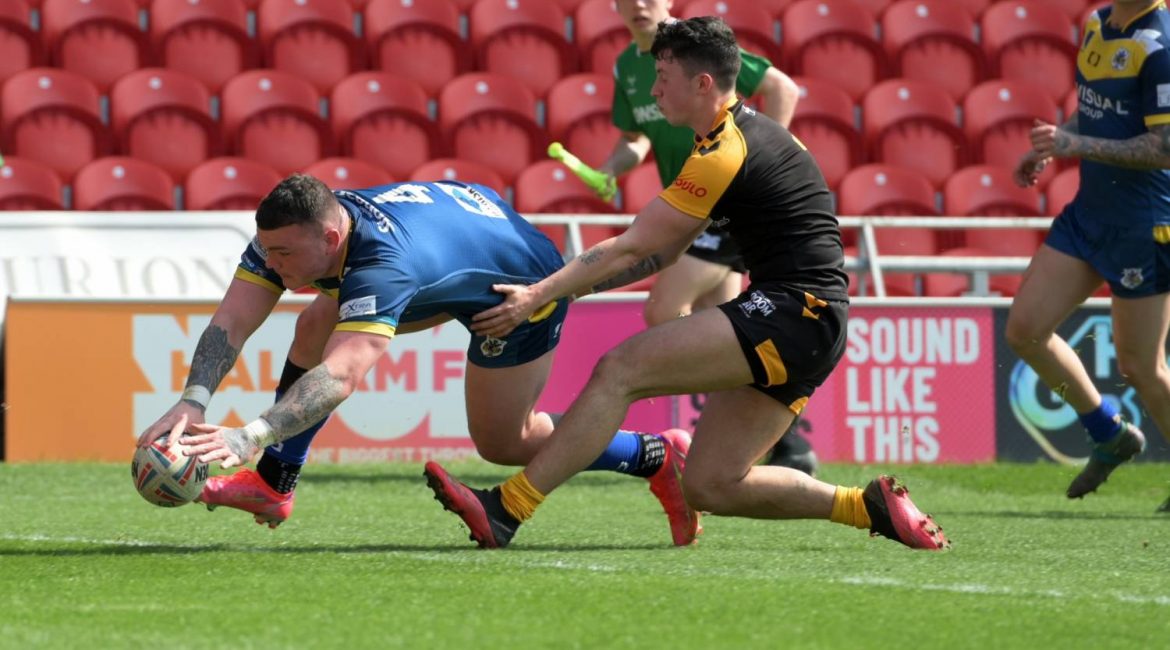 Keighley Cougars are today happy to announce the signing of Robbie Storey.

Robbie, who can play either in the centres or the back row, arrives at Cougar Park on a two-year deal on the back of a fantastic individual year with Doncaster in Betfred League 1.

A member of the Dons side that reached the play-off final in the third tier this past season, his performances caught the eye as he scored a try against the Cougars in our August meeting.

The potential shown, his strength and athletic ability, and a number of impressive outings throughout 2022, prompted Head Coach Rhys Lovegrove and Head of Rugby Andrew Henderson into making the move to secure his signature.

“Robbie came through the Castleford system and is a young player who we feel has a lot of potential,” said Henderson.

“He left Castleford to experience life in the French Elite One competition, which suggest to me that he isn’t afraid to take himself out of his comfort zone.

“Robbie will be looking to push for a place in either the back row or the centres.

“He is a powerful ball carrier and solid defender who has impressed us this season with his performances at Doncaster.

“We have identified areas within his game he will need to focus on in this upcoming pre-season to help become the player we feel he can be.

“Rhys and the coaching team are really looking forward to working with, and developing, Robbie further.

“We welcome Robbie and his partner to the Cougar family.”

Storey added: “I decided to join the club after speaking to Hendo and Rhys about the clubs ambition going forward.

“Their positivity was very good and the opportunity to play at the higher level and for such a great club is one that I couldn’t turn down.

“I’m looking to achieve as high a league position as possible, to shock a few good teams, and to develop as a player under the guidance of the very experienced coaching team.

“I’m really looking forward to the challenge and to play with the quality players around the club.

“I will give my all in the next two years and hopefully beyond going forward.”

A product of the West Hull club, Robbie was a member of a dominant age group that competed in every tournament until they reached the end of the junior cycle.

From there, he was picked up by the City of Hull Academy before making the move to the academy system at the Castleford Tigers.

Continuing to impress in the youth ranks at The Jungle, international and county recognition would follow as the versatile edge player featured for both England and Yorkshire in games against Australia.

Two seasons of impressive performances for the Under-19’s at Castleford were rewarded as Storey was handed a two-year professional contract ahead of the 2019 season.

Unable to break into the first team, he made the brave decision to leave the Tigers and move across the channel to sign with Carcassonne in the French Elite One competition.

Making 17 appearances for the Canaries during his time in France, he helped the side reach that season’s Grand Final where they were to be defeated by Lezignan.

Upon the conclusion of the winter season, Robbie returned home to England and signed with the Dewsbury Rams for the remainder of the 2021 season.

After finishing the year at the Tetley’s Stadium, his next port of call would be Doncaster, arriving in South Yorkshire ahead of this past year.

Scoring 10 tries in 16 appearances during 2022 with the Dons, Storey would impress throughout as the side were agonisingly defeated in the play-off final for the second consecutive season.