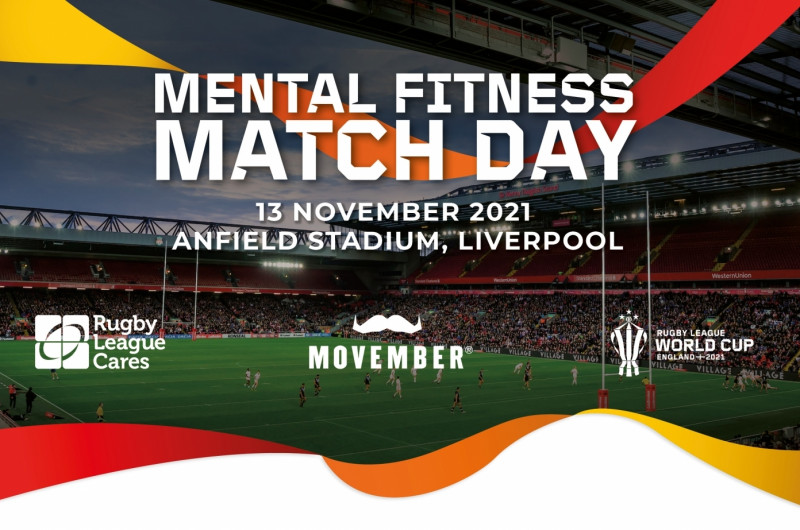 Through the tournament’s innovative partnership with Movember and Rugby League Cares, the double header will be branded the Mental Fitness Match. The men’s quarter final at the world-famous home of Liverpool FC could potentially feature England as well as the scheduled England women’s team match against Canada women.

The Mental Fitness Match will take place during Movember’s annual fundraising campaign in November 2021 and will raise awareness of the outstanding work the organisation will have delivered along with Rugby League Cares by harnessing the global scale and reach of RLWC2021 to make a difference to communities in England.

Earlier this year, RLWC2021 announced the tournament would be working with Rugby League Cares to support men’s health experts, Movember, to deliver their ‘Ahead of the Game’ programme in Rugby League towns and cities beginning in Leeds in October. The programme will still aim to reach 16,000 young athletes and parents combined as well as 360 coaches.

The ‘Ahead of the Game’ programme will be delivered by current and former Rugby League stars using their own experiences and struggles with mental fitness to educate future stars of the game Including  England and Great Britain legend Keith Senior, former GB star Lee Crooks as well as double Challenge Cup winner Paul Wood, Barrow Raiders prop Lee Jewitt and hooker Shaun Lunt.

The programme will also benefit from the inclusion of the incredibly inspirational Jimmy Gittins, former Wakefield Trinity and Dewsbury player who was paralysed is an accident in 2002 when his neck was broken in two places.

RLWC2021 Mental Fitness Ambassador, Robbie Hunter-Paul holds a long affiliation of championing mental fitness within Rugby League. Hunter-Paul said: “The programme is designed to deliver impactful training to the next generation of stars. To have started that journey now a year out from the tournament just goes to show what is possible in the next 12 months and beyond.

“Rugby League’s culture has always been about ‘looking after one another’ but this training also shows how important it is to look after your own mental fitness and I am extremely proud to be part of the brilliant group of trainers delivering the sessions.”

Jon Dutton, RLWC2021 Chief Executive, said: “Our objective from day one was to stage a unique tournament which not only delivers breath-taking action on the field but also leaves a lasting and positive legacy in communities.

“At this particular moment, mental well-being is a priority for so many people and I am grateful to Movember as well as Rugby League Cares for their outstanding contribution in helping realise our ambitions. The double header at Anfield will focus everyone’s attention on this important topic.

“I would also like to thank the great and loyal servants of the game – past and present – for their commitment to the ‘Ahead of the Game’ initiative which delivers important mental fitness education not just for young players but also to their families and coaches. It is something we are understandably proud of.”

RL Cares, Head of Community, Emma Goldsmith said: “In these challenging times, Rugby League Cares is proud to be working with RLWC2021 and Movember to deliver Ahead of the Game. Our partnership is helping us keep as many members of the Rugby League family mentally fit and well, both during lockdown and beyond as we all look ahead to a post-pandemic 2021 and what will be a very special day for everyone at Anfield next year.”

Meanwhile, Tracy Herd, Programme Manager at Movember, added: “With all that 2020 has thrown at us, young people need our support now more than ever.

“We’re pleased to be able to give them the tools they need to help build mental resilience and thrive during these tough times, and hope the Ahead of the Game programme will teach skills they can lean on for the rest of their lives.

“It’s exciting to be able to look forward to live sport again in 2021 with the RLWC and its bespoke Mental Fitness Match, which along with delivering a spectacle in its own right, emphasises the importance of looking after each other and our own mental wellbeing.”

The ‘Ahead of the Game’ programme has been temporarily paused due to the latest COVID-19 restrictions, RLWC2021 will provide an update on its resumption in due course.

Fans can apply for tickets through the ballot for a chance to be at Anfield on 13 November 2021 to witness this unique match day at RLWC2021 via: rlwc2021.com/tickets