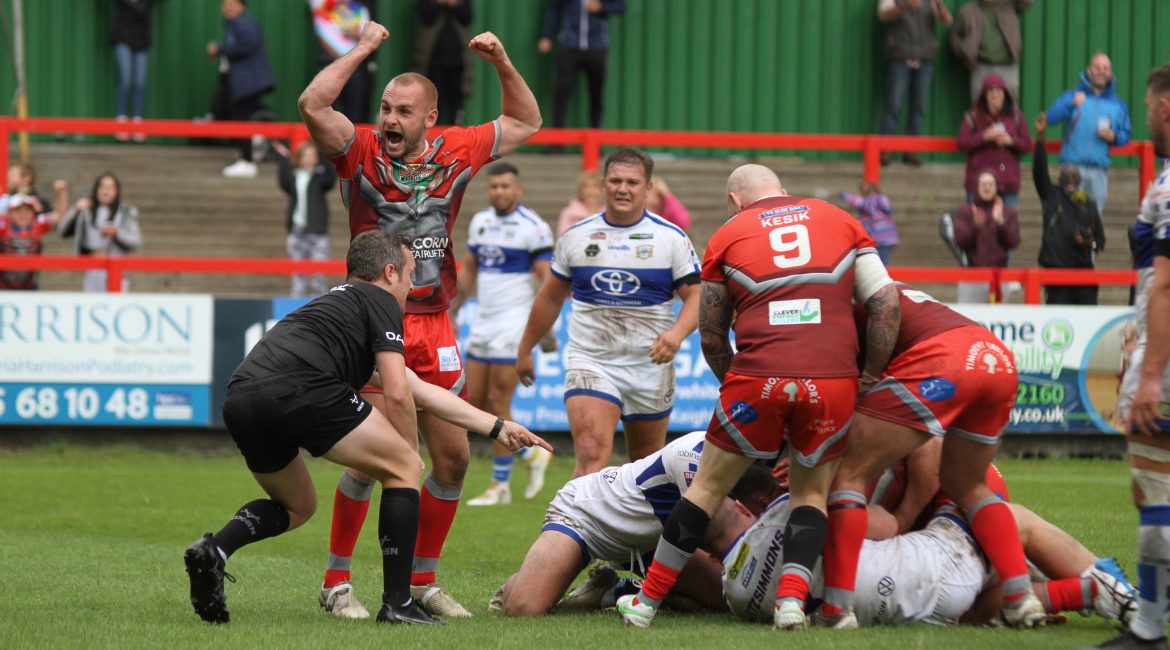 KEIGHLEY Cougars play-off aspirations took a blow as they were defeated by Workington Town at Cougar Park.

It was a tale of two halves on a wet afternoon in West Yorkshire, with a solid first half display by Rhys Lovegrove’s side being followed by an error strewn and ill-disciplined second forty costing which allowed the Cumbrian outfit to come back into the game and take the win.

The Cougars got off to a bright start, as on the back of a penalty they shifted play to the right edge and Taylor Prell sent the ball wide to Mo Agoro who powered his way over in the corner.

In the build-up to the try however, Workington lost Alex Young to a knee injury that forced him to be carried from the field.

Town then grew into the game and nearly levelled up through Marcus O’Brien and Brad Holroyd, but both were held up over the line by the home defence.

The home side though would extend their lead against the run of the play as consecutive penalties gave them field position from which they worked the overlap to send Josh Slingsby walking in at the corner.

Postlethwaite then thought he had grounded a response for Town, but a last-ditch defensive effort from Charlie Graham forced the winger to knock-on.

Ryan Wright attempted to extend his sides lead further as he scurried through from dummy half but was denied by scrambling Town defence.

However, shortly before half-time the visitors would get on the scoreboard as a Jamie Doran kick to the corner was knocked back into play by Calvin Wellington to Joe Brown who dived home in the corner. Carl Forber adding the extras.

With the weather conditions worsening, Keighley started the second half brightly as Scott Murrell kicked a 40/20 from the first set of the half.

The resulting play led to a penalty for offside against Workington, Jack Miller opting to take the two on offer.

Ill-discipline then crept into the Cougars game and would begin to cost them dearly as the away side would turn the screw on their hosts.

On the back of four back-to-back penalties, Chris Thorman’s side would level up the scoreboard as Matty Henson weaved through from dummy half to turn himself over.

And then a kick to the corner from Doran again caused chaos as the ball skidded across the soddened surface and Jake Moore would react quickest to dive onto the ball and score.

The Cougars though would retake the lead against the momentum of the game as their first attacking threat of the second half paid off with Con Mika, the forward powering his way over for a first try for the club after stepping through the tackle.

The game was swinging back and forth, Town nearly took the lead once more on the back of a Lee Postlethwaite interception, but Forber was penalised for offside from a kick to thwart his team’s efforts.

The visitors then got the winning try as Holroyd rounded the defence to touch down beneath the uprights.

The Cougars did attempt to snatch the win themselves, but the Workington defence recovered well on the back of conceding a penalty to hold the home side out.

Dan Parker was placed on report in the games closing stages for a cannonball tackle on Ryan Wilson as he looked to break before the tensions finally boiled over on the sound of the final hooter with the two sides coming to blows.