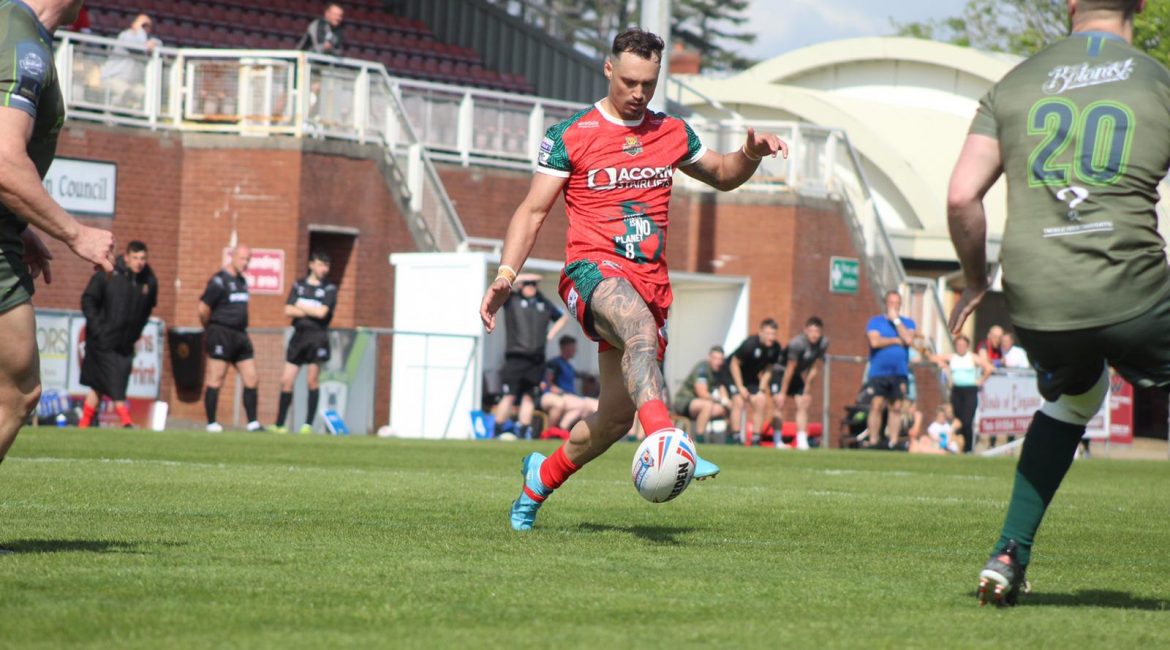 KEIGHLEY Cougars moved to the top of the Betfred League 1 table with an away victory at the West Wales Raiders to maintain their unbeaten start.

In an ugly game that Head Coach Rhys Lovegrove vowed to never speak of again, the Cougars remained professional in the face of a Raiders resistance and some questionable decisions to get the job done.

However, credit must go to bottom of the league West Wales who dug in throughout to push Keighley to their limit.

With new signings Dane Chisholm and Toby Everett both on debut, the visitors got off to the best possible start.

West Wales were penalised for offside, allowing Kyle Kesik to break the defensive line from the tap.

From there, the ball was worked out wide where Mo Agoro was on hand to dive over in the corner to continue his recent run of form.

The Raiders though had an opportunity to level the scoreboard but spilt the ball on the line.

This would allow the visitors to extend their advantage as they would force another knock-on shortly after and from the advantage played, another line break would follow with Jack Miller on hand to take pass and race home beneath the crossbar.

The home side would remain tenacious but scrambling defence was not enough to prevent James Feather racing out of dummy half to burrow his way over in trademark fashion.

West Wales saw a potential try ruled out for a forward pass but went into the break further behind as Nathan Roebuck rounded the posts on the back of an outstanding short ball outside from Chisholm.

The second half would begin with Roebuck on the receiving end of a tip tackle, with the resulting penalty seeing Miller have a try controversially ruled out for offside despite being behind both the kicker and the referee before racing through.

A dropout though would lead to Keighley’s fifth try of the contest.

Dalton Desmond-Walker collected the kick and fed Chisholm, the half-back engaging the left edge superbly well with the result being Charlie Graham presenting Alix Stephenson with a walk-in at the corner.

Roebuck again copped a dangerous tackle, however the referee allowed play to continue, and the Cougars will have been glad he did as Chisholm put a superb kick down in the right-hand corner where Agoro won the foot race to touch down.

The Raiders though would continue to ask questions of their visitors but again Lovegrove’s charges would have answers.

From a scrum, the ball would be moved quickly down the backline and Miller stepped outside a would-be tackler to force his way in at the corner for his second try.

The home side would then become the first team in 230 minutes to breach the Keighley defence, but it would come in extremely contentious circumstances.

Callum Merrett dropped the ball just short of the line with the touch judge signalling for a knock-on as Billy Gaylor looked to play on the zero tackle.

James Jones though would overrule his assistant and award the try much to the bemusement of all in attendance at Stebonheath Park.

From the restart, West Wales dropped the ball, and, on the turnover, Miller would race through to complete his fourth hat-trick in his last five appearances against the Llanelli based outfit.

Cougars found one final score in the match, again from a scrum they would make the most of those in the ruck and exploit space left for Graham to race through and touch down.

The game though finished with a brawl after Chisholm was taken out late from a kick.