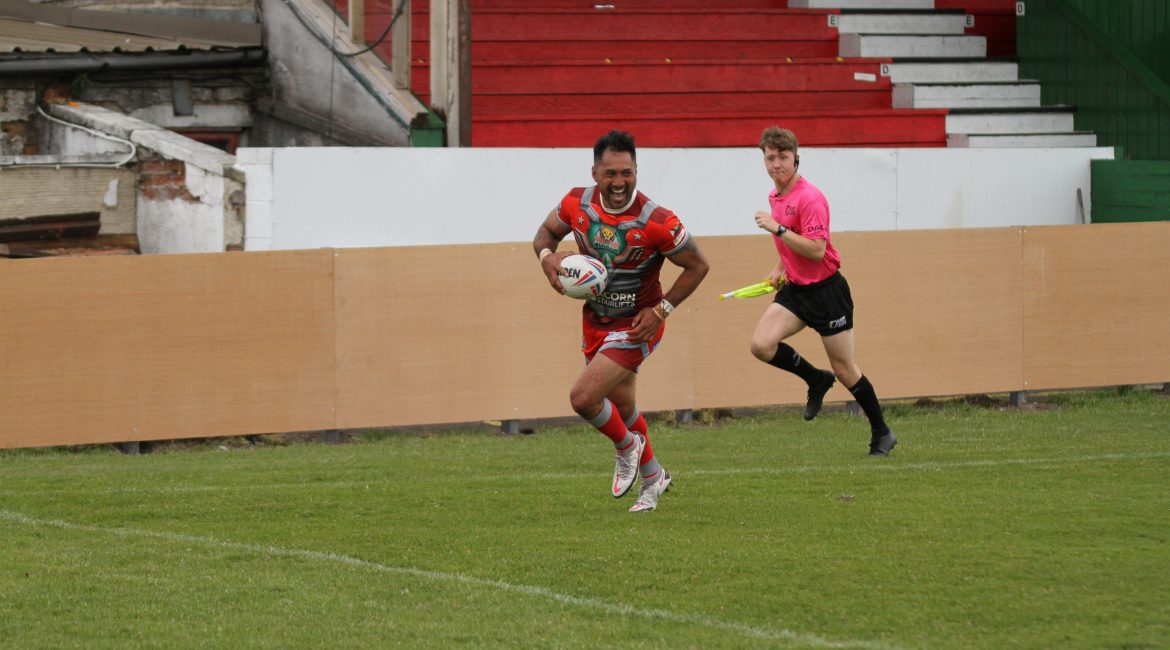 KEIGHLEY Cougars continued their near impeccable home form with a 13-try rout of the bottom of the table West Wales Raiders.

The home side, who had been heavily disrupted in the final 48 hours leading up to the game through a positive covid test at training on Friday, dominated throughout the contest and were more than good value for their win against the foot of the table Raiders.

Jake Webster opened the scoring in the 3rd minute of the game, powering his way over after good play from the home side on the back of a penalty.

After both Quentin Laulu-Togaga’e and Spencer Darley saw efforts pulled back for forward passes, the Cougars would then find their second score through Dan Parker who spotted a gap in the defensive line and raced through.

West Wales then put the restart out on the full, and Taylor Prell would be the beneficiary as he found the line after a lovely show and go from the resulting penalty on halfway.

With the home side now in full flow, they kept the scoreboard ticking over and after Prell broke, he offloaded to the supporting Jack Miller who held off Michael Holden to dive over.

Josh Slingsby wouldn’t be able to touch down a Laulu-Togaga’e chip, but he made up for it on the next set as he stepped the marker from dummy half and raced 80 metres to touch down in the corner.

Laulu-Togaga’e senior was the beneficiary of a Jack Coventry break, taking the forward’s offload to go 50 metres and slide home beneath the crossbar.

West Wales managed to get themselves a try before half-time however, the referee awarding the visitors six again and Jamie Murphy managed to burrow his way over from a metre out.

The Raiders started the second half the brighter of the two sides and found themselves another try as Sam Herron powered over on the back of an outstanding 40/20 from Fraser Stroud.

Keighley would again though take the game by the scruff of the neck, despite losing Robert Matamosi to a head injury following an assessment during the half-time interval.

After the visitors put a kick out on the full, some good attacking play worked the ball to Prell, and he peeled off a defender to crash over for a second.

Parker then sealed his hat-trick with two quick fire tries, breaking a tiring West Wales defence on both occasions, the second of which came of the back of great father-son link up play from Quentin and Phoenix Laulu-Togaga’e

Ewan Badham then saw red in terms of his temper and cards as he was giving his marching orders, Kieran Moran’s response landing himself in the sinbin.

From the restart, Slingsby and Kesik would both break the West Wales line in the same passage of play and the latter would offload to Miller, who finished unchallenged underneath the uprights.

Despite being out of sight, the Cougars defence did not relax when not in possession and showed great work to hold both Morgan Evans and Marcus Webb up over the line in quick succession.

The father-son duo would link up once more as Phoenix broke down the right edge after a superb step to create space down the wing before exchanging passes and eventually flicking the ball out of the back to dad Quentin, who scored in the corner.

Darley then completed the rout, piggy backing Murphy to the line with him before falling over to score his first try for the club.