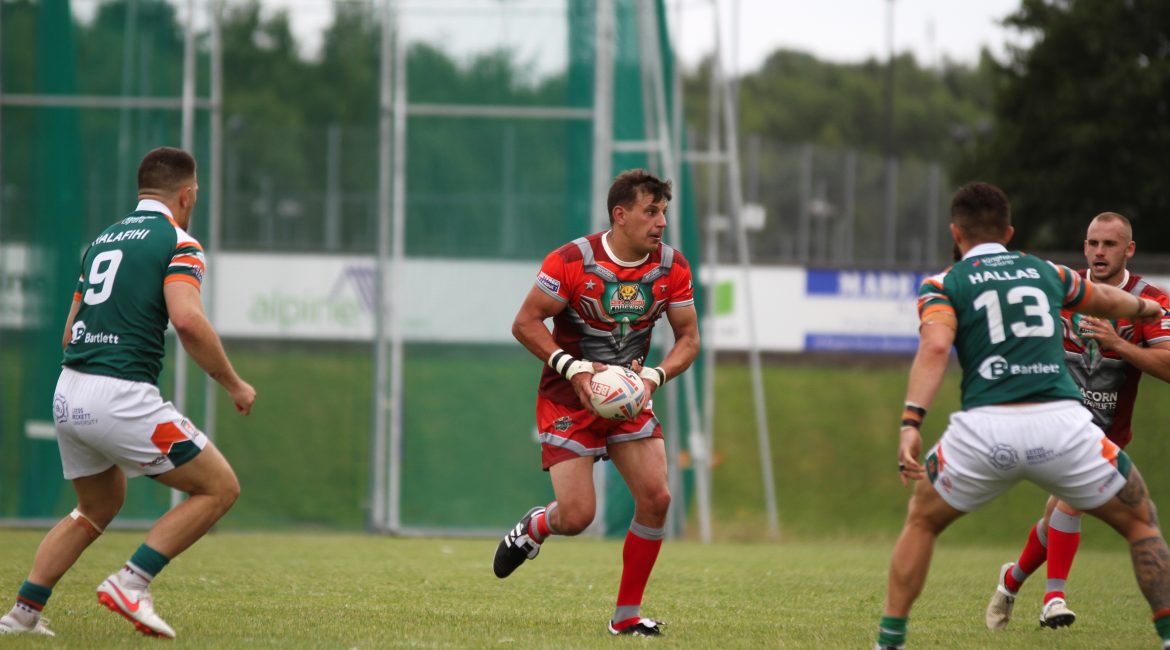 KEIGHLEY Cougars put in a dominant performance to defeat the West Wales Raiders and record a third consecutive victory on the road.

On an historic afternoon in Llanelli, James ‘Buster’ Feather made his 344th appearance for the club to break the record of the late Phil Stephenson.

And to add the emotion of the occasion, Phil’s nephew Alix made his debut for the club after recovering from the broken leg sustained in pre-season. A third generation of the Stephenson family to represent the club.

The Cougars opened the scoring early, Jack Miller taking a quick tap and going through a gap on the line to dive over on the back of a penalty against the home side moments after Kyle Kesik saw an effort ruled out for a dropped ball.

It was all Keighley in the games opening quarter, and a second try would follow as a kick to the corner from Miller was taken out the air by Josh Slingsby, the winger then rounding his opposite number to touch down in the corner.

The visitors continued in the same vein and saw another two efforts ruled out as Miller and Slingsby were both denied their second tries through forward passes.

However, the Raiders found a way back into the game as a high bombing kick on the last was spilled in goal and Will Ramsey reacted quickest to pounce on the loose ball.

This was a minor blot on the copybook for Rhys Lovegrove’s side as they soon extended their lead further through Quentin Laulu-Togaga’e, the full-back taking a kick on the last and breaking a tackle to get home from 50 yards out.

Ramsey was then forced from the field with a head injury, adding to West Wales woes, before Keighley again scored as Jake Webster raced onto the ball and crashed over from close range.

With the clock running down towards the break, Con Mika was placed on report for an incident in the tackle.

The second half would see a tiring home outfit punished consistently by a hungry Keighley side.

After pressing the Raiders line from the restart, Miller raced round the uprights for a second after providing outstanding support play on the back of a line break from Webster.

Another score would follow shortly after, the quick thinking of Kesik creating a gap in the defensive line that Josh Lynam strolled through to dive over.

Feather then thought he was going to mark his big day with a try, but he dropped the ball with the line beckoning.

Phoenix Laulu-Togaga’e registered a third try of the half, squeezing over in the corner after taking a quick pass from Jason Muranka on the back of a penalty.

There was a moment of celebration though for the home side as a grubber kick on the last was taken on the bounce and touched down by the onrushing Phil Cowburn shortly after Joe Burke saw his attempted consolation effort ruled out for a forward pass.

The game was getting niggly, and it eventually led to James Jones in the middle taking action.

After Raiders centre Ashley Bateman questioned a decision made by the official, he awarded the Cougars a penalty and ended the Wales international’s afternoon with a yellow card.

With four minutes remaining on the clock, Miller capped of a fine individual performance by completing his hat-trick to seal the victory in style for the Cougars side.

He chased down his own grubber on the last and managed to get to the ball and touch down beneath the crossbar after West Wales failed to clear their lines.