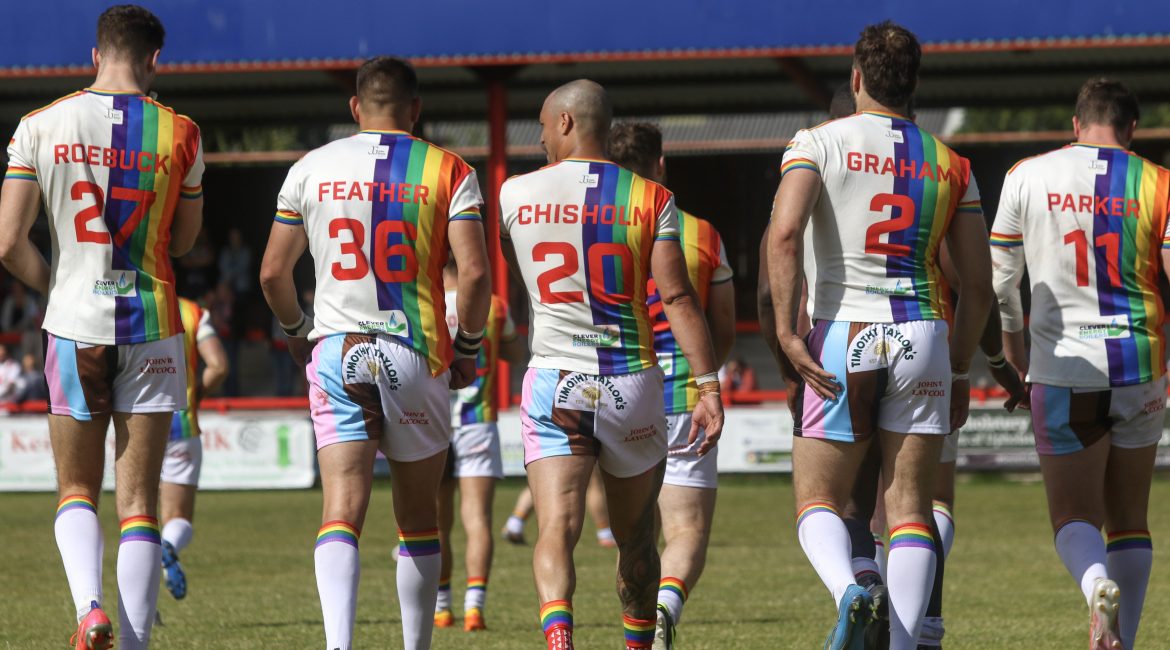 KEIGHLEY Cougars maintained their unbeaten start to the Betfred League 1 season with a comprehensive victory over the West Wales Raiders to record a twelfth win from twelve games.

On the club’s third annual pride event, Rhys Lovegrove’s side ran in sixteen tries, Jack Miller adding eleven conversions, to ensure they found another pot of gold at the end of the rainbow whilst also keeping a second consecutive clean sheet.

The Cougars opened the scoring inside the game’s opening three minutes as they exposed the Raiders left edge and sent Miller racing over on the back of a flowing move down the pitch.

Junior Sa’u was then held short of the line on the fifth, but the side opted against kicking and shifted the ball across the field to Nathan Roebuck who forced his way over.

West Wales held out defensively, but Keighley would extend their lead through Mo Agoro who touched down in the right corner.

And on the back of a scrum, Dane Chisholm weaved through two defenders to touch the ball down.

Keighley would again opt to play the ball on the last tackle and would again be rewarded as with the visitors defensive line bent out of shape, Jake Webster rounded to race over the line.

Just before the interval, Lewis Young raced home beneath the dot after Chisholm opened up the West Wales defence to break down the field.

The second half would see an onslaught as the Cougars would run in eleven tries.

Sa’u powered his way in at the corner to being the free scoring second forty.

Three minutes later, Roebuck broke the line and shifted the ball inside to Webster who raced over for his second.

A piece of individual brilliance by Agoro would keep the scoreboard ticking over, the winger cutting inside and breaking through three attempted tackles to dive over.

The centre first broke through a tackle and raced 80 metres much to the delight of the Cougars faithful before from the restart, he would take a pass from Chisholm and again raced the length of the field.

With West Wales under the pump, Agoro completed his hat-trick as he powered over on the back of a scrum that allowed Chisholm to take on the line.

Another restart would lead to a penalty that allowed the Cougars to make 70 metres up the field.

And from the tap, Sa’u would offload out the tackle to Aaron Levy which allowed the backrower to crash his way over.

Agoro then scored his fourth of the afternoon, carrying two West Wales defenders over the line from close range after Chisholm produced an outrageous piece of skill.

West Wales would then have a rare period of possession but were held up over the line on the last tackle.

From the turnover, the Cougars again went the length of the field.

With the Raiders defensive line again on the backfoot, Chisholm took on the line and shifted the ball outside to Levy who stepped through a tackle and sprinted over for his second try of the afternoon.

The Cougars would register their final score of the game with five minutes left on the clock.

A tired West Wales defence was opened up once again by Chisholm, the half-back racing the near full length of the field before offloading to the supporting Roebuck who walked the ball home.

Keighley would look to find the try-line one more time as they broke the line once more, but a loose pass out of the back would be spilled.