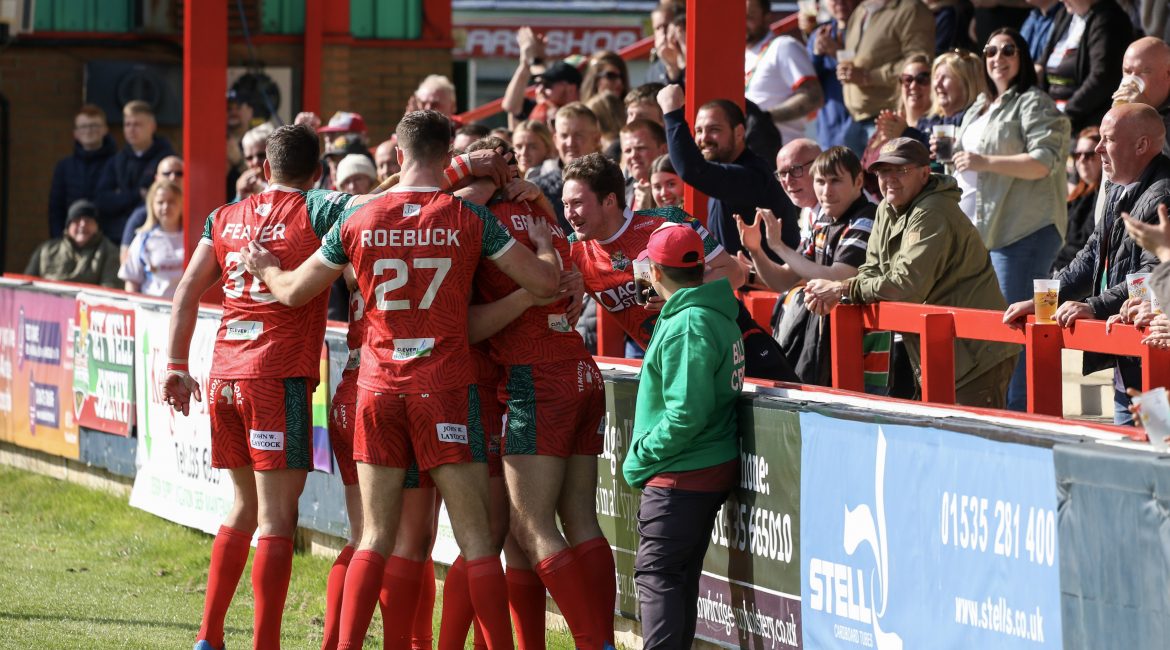 In truth, Rhys Lovegrove’s side were the dominant side from the first whistle to the last as they laid down another marker in their quest for Championship rugby next season.

Keighley opened the scoring early from the boot of Jack Miller, after the visitors were penalised near to their own posts for a high tackle on James Feather.

The Cougars continued their early onslaught and would continue to turn possession and penalties into points.

A Scott Murrell kick to the corner on the last was spilt under defensive pressure from Mike Butt, unfortunately none of his teammates reacted and Lewis Young reacted quickest to ground the ball for the game’s opening try.

From the restart, the home side would go the length of the field to extend their lead.

Mo Agoro would return the kick with purpose, breaking 60 metres before Murrell himself would break from the play the ball.

Now camped on the Lions line with four tackles still in the bank, Miller would turn through the tackle and ground the ball before adding the extras himself.

Swinton then grew into the game but had no answer to the hosts dominant first forty, the closest they came to scoring was Jose Kenga being held up over the line against his former club.

And then shortly before half-time, Charlie Graham would force a handling error.

From the scrum, Keighley shifted the ball wide to Agoro and the winger continued his recent run of form by stepping the debuting Kieran Rush and racing home in the corner to blow the roof of Cougar Park.

Things though threatened to boil over just before the interval as Agoro and opposite number Butt nearly came to blows on a number of occasions.

Swinton started the second half brightly but couldn’t find a way through the tenacious home defence.

They certainly didn’t aid their cause however as first Richard Lepori was taken from the field injured after a collision with Graham.

Then in the 53rd minute, when Nick Gregson connected with a swinging arm that attracted the interests of the touch judge on the near side.

After discussions between the officials, the decision was taken to send Gregson for a ten-minute breather.

From the resulting penalty, Spencer Darley nearly extended the Cougars lead but just couldn’t get his hand to Murrell’s kick behind the uprights.

Jayden Hatton then thought he had the Lions first points of the afternoon, but he was taken into touch by a superb last-ditch tackle near to the line by Miller.

Keighley though would be the game beyond any doubt with two quickfire tries.

Charlie Graham first stepped inside through the line from the centres to race over, leaving four Swinton defenders in his wake.

And from the restart, Brenden Santi went on a barnstorming run from which Agoro somehow found his way over in the corner under pressure after the ball was worked wide to his wing once more.

Graham then turned defender to take Jayden Hatton into touch once more as the winger looked to dive over in the corner.

Shortly after, Graham and Rhodri Lloyd, on his 150th appearances for the Lions, would come to blows after the two had exchanged unpleasantries on the ground following a tackle.

The referee would then grow wary of the Swinton ill-discipline late on and end Deane Meadows afternoon early with a yellow card after the visitors gave away three consecutive penalties as the game came to an end.