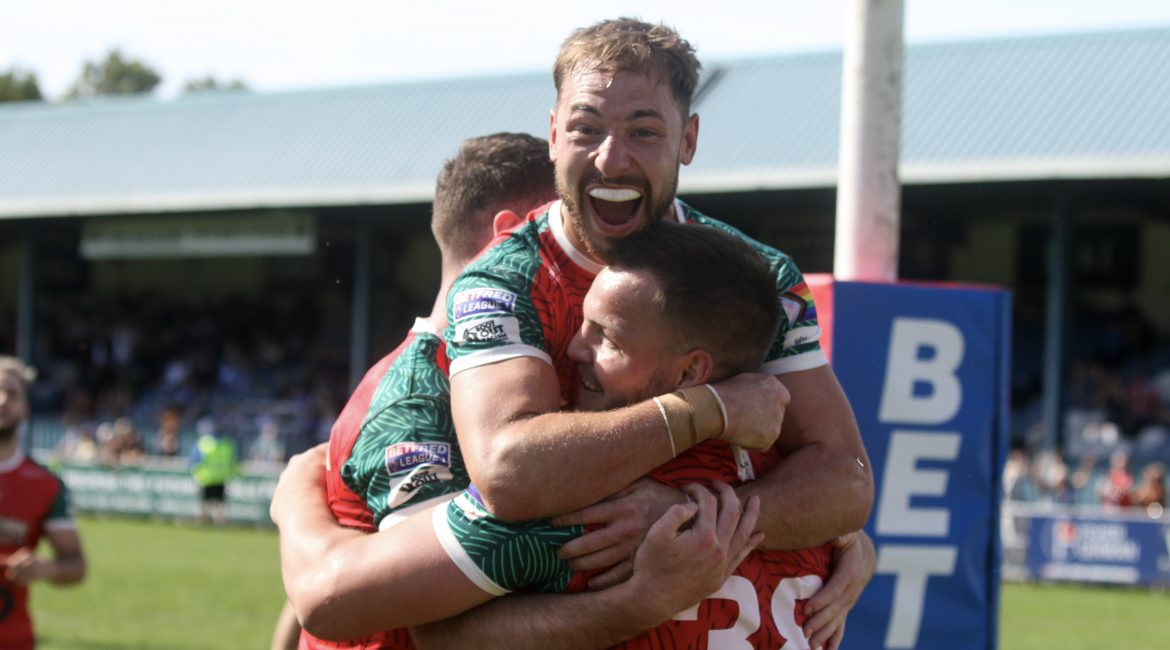 Under the cosh after a poor first half that allowed a depleted Swinton side to take a comfortable lead into the half-time break, the words of Head Coach Rhys Lovegrove in the dressing rooms clearly echoed after the restart.

And the victory now moves the Cougars within 3 points of promotion to the Championship, with the end of their 8 years stay in the third tier now in sight.

The boot of Jack Miller would open the scoring on the afternoon, the Keighley skipper taking the two on offer after Swinton were penalised for offside near to their own line.

However, the next 32 minutes of the game would be all Lions as they raced into an 18-point lead.

On the back of a penalty, the home side would load up near to the line and found a way over on the last tackle as Jordan Case crashed over from close range from a superb short ball.

They would extend their lead minutes later as Lewis Young spilt the ball from the kick on the last, and the Lions would send the ball to the left wing where Max Kirkbright was on hand to dive over for a try on debut.

The introduction of the bench would settle Keighley down, but they couldn’t find a breakthrough.

George Roby would find a way through again though for the hosts as he broke from dummy half and went through the visitors defence like a knife through butter to dive over the line.

And it appeared the writing was on the wall as another spilt kick on the last would see Lewis Else collect the loose ball and touch down beneath the dot.

But the turning point came on the sound of the half-time hooter as from a scrum, Charlie Graham turned through a tackle to touch down.

The Cougars came back for the second half with newfound confidence and would come flying out of the traps at their opponents.

And after forcing a dropout just minutes into the half, they would take advantage.

Brenden Santi broke a tackle from the dropout and despite a superb last-ditch tackle by a Lions defender, he got the offload away to Toby Everett, allowing his fellow front rower to crash over.

With it now a one game score, and the home side under the cosh, the Lions would be given the opportunity to nudge themselves a further two points in front.

Abram converting a penalty after the official deemed Keighley had been offside near to their own line.

But Lovegrove’s side wouldn’t go away and got themselves within two points just moments later.

From a scrum, Dane Chisholm danced through the Swinton defence.

After being caught by a defender, the visitors shifted the ball across the face of the defensive line and Junior Sa’u managed to fend off two tacklers to force his way over in the corner. Miller superbly converting from the touchline.

And the comeback would be completed shortly after.

Chisholm again showed a piece of individual brilliance to open the Lions defence, this time offloading inside to Kyle Trout.

Trout would in turn sidestep Else and now unchallenged, raced to the line to send the 300 strong travelling support from across the Pennines into raptures.

Both sides had opportunities to score but defences would come out on top with the Cougars holding the Lions up twice in the final minutes.

But upon the sound of the final hooter, an explosion of colour and noise signalled another Keighley victory.