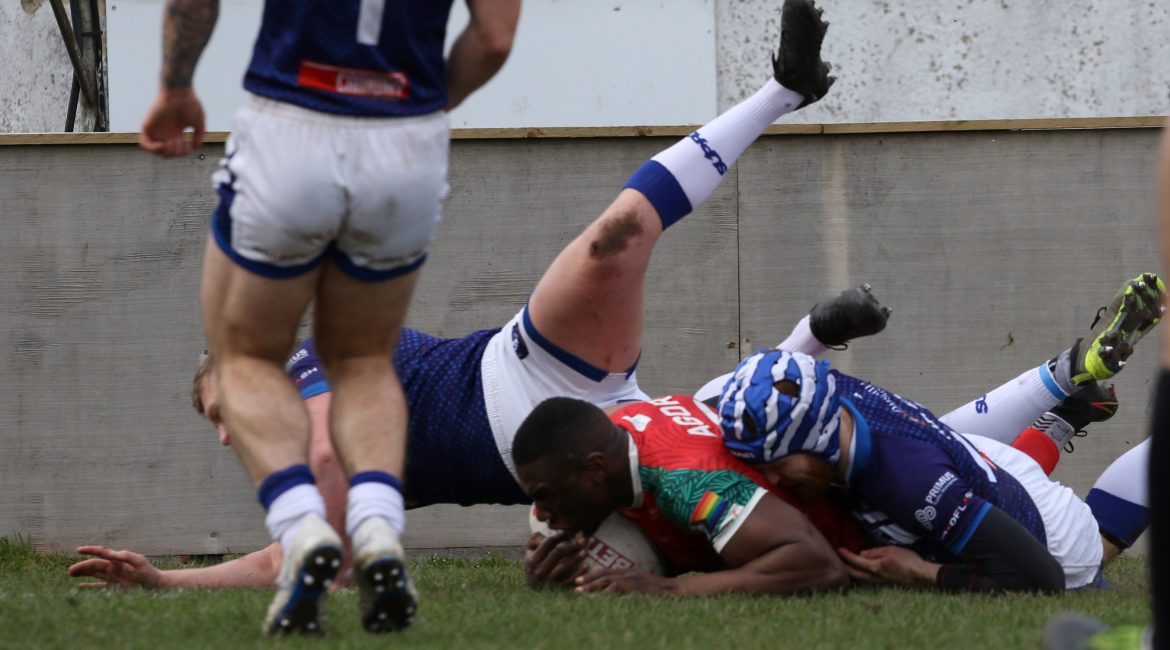 KEIGHLEY Cougars pre-season preparations finished with a 22-42 home defeat at the hands of the bookmakers favourites for promotion, the Swinton Lions.

A lacklustre first half in which the Cougars were clearly a step behind their visitors from Greater Manchester was followed by a slight improvement in the second forty, but the damage had been long done by the sound of the half-time hooter.

The Lions opened the scoring inside the game’s opening 90 seconds.

After forcing a knock-on from Matthew Bailey, the visitors worked the ball out the back to full-back Dan Abram who produced a show and go to race through the line and score, but he couldn’t add the extras from the boot.

From the restart, the visitors extended their lead immediately as Ben Heyes broke down the Cougars right edge and offloaded inside to the supporting Max Roberts who won the race to the line.

Keighley though came back into the game as Dalton Desmond-Walker forced a dropout, from which the home side created an overlap allowing Mo Agoro to dive home in the corner.

Swinton would quickly re-establish their two try advantage when after Brenden Santi superbly denied Jack Spencer, Luke Waterworth would not be denied as he raced through from dummy half to dive behind the uprights despite the protests of Jake Webster in the aftermath of the try being awarded.

From the kick-off, Keighley again came back into the arm wrestle as they forced a knock-on and James Feather showed his experience as he went out the back of the scrum unchallenged to touch down.

However, the defensive horror shows from both sides continued and Matty Wilkinson would take full advantage after Nathan Roebuck raced out the line leaving a gap within the line.

The Lions continued to pressure the Keighley line and were only denied a further score when Scott Murrell reacted quickly and managed to hold up Nick Gregson.

The tries would come through two quickfire scores shortly before the half-time interval.

Richard Lepori walked in at the corner on the back of great play from Mike Butt before Lewis Hatton showed power from close range to bash over beneath the crossbar.

The second half began in a similar vein as the Lions extended their lead through Lepori, the winger weaving through on the back of some superb play from Owain Abel who had been introduced after the interval.

The Cougars however got another six points on the scoreboard as Charlie Graham forced a scrum, and Nathan Roebuck took advantage of the space left on the field to dive over next to the posts.

Both sides would continue to exchange possession on a regular basis with handling errors creeping in as both sets of players began to tire.

But it would be Swinton that scored next as a kick over the top from Jack Hansen was fumbled by Graham and the Lions half reacted quickest to touch down the loose ball.

Jayden Hatton then thought he had extended the lead further, but the touch judge ruled he had a foot in touch as he dived over in the corner.

The final score on the afternoon though would go the way of the home side.

After the official awarded a six again near to the Swinton line, the Cougars would go over on the zero tackle as Feather came out of dummy half following the signal from the referee to send the onrushing Bailey crashing over between the sticks from close range.

Focus now moves onto a fortnight’s time when Rhys Lovegrove’s side open their Betfred League 1 campaign with against Oldham.