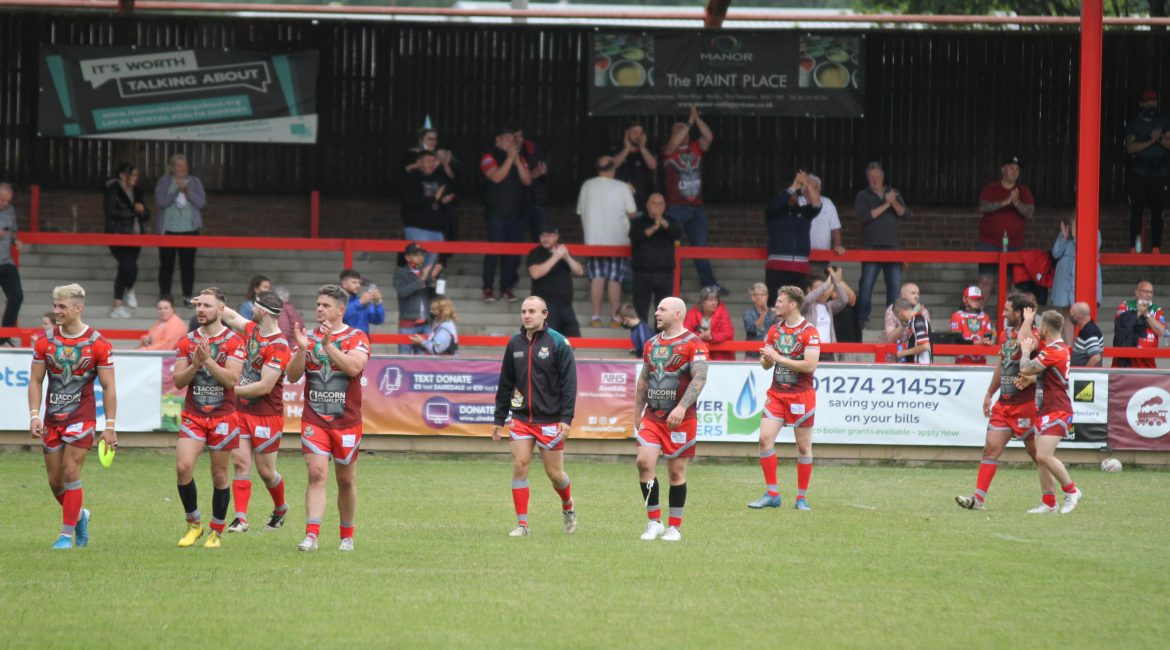 A dominant second-half display saw the Keighley Cougars to an otherwise hard-fought victory against a resilient London Skolars outfit.

It was a performance of which Head Coach Rhys Lovegrove could be proud off as he went into the fixture with only 16 players available to him as a result of injuries and covid protocols.

And despite him and his side finding themselves facing an uphill battle in the face of the greatest of adversaries, they earned a gritty win together as a collective unit.

The visitors had the better of the game’s opening exchanges and got their just rewards for a bright start as Tom Firth burrowed his way underneath the sticks from close range.

This lit a fire within a Cougars side depleted by the injuries and Covid absences and they dominated the remainder of the opening quarter.

Josh Slingsby got them onto the scoreboard with an excellent diving effort into the corner and was unlucky to not score a second from a Jack Miller kick to the corner.

Champagne Rugby League then presented Quentin Laulu-Togaga’e with a walk in at the line after Scott Murrell broke the line before Dan Parker provided the assist with an outrageous no look offload out the back.

London though would keep threatening and took the lead once more on the half hour mark as Lameck Juma stepped through an attempted tackle to touch down. Neil Thorman converting on his 100th appearance for the club.

From the restart, the Skolars coughed up possession and gave away a cheap penalty. Miller needed no second invitation to dive over after being given the nod to take the tap quickly.

And quick thinking from Iliess Macani prevented a further Keighley score before the interval as the full-back acted quickly to prevent Brenden Santi getting onto the end of a kick in goal on the last tackle from Miller.

The second half began in the same vein as both sides found themselves in a real war of attrition.

Kameron Pearce-Paul thought he had given London the lead for the third time on the afternoon, but staunch defence forced a knock-on.

The boot of Miller would though extend the hosts advantage, opting to take the two after the visitors gave away cheap metres for dissent on the back of a late shot on Murrell.

Ill-discipline was creeping to the Skolars game, and the Cougars continued to make the most of possession as Santi powered his way over from close range after an injury stoppage.

A further two points from Miller would follow as he took the two once more after winning a penalty for obstruction 20 metres out from the line.

London was on the backfoot and had no answer for the continued pressure, and Santi would score his second as he raced over on the back of breaks from Mo Agoro, on his 150th career appearance, and Aaron Levy.

However, the visitors threatened a grandstand finish as they found two quickfire tries.

Dalton Grant first scored in controversial circumstances as it appeared Alfie Seely had grounded the ball to concede a dropout prior to the awarding of the try, with the Cougars faithful not afraid to make their feelings known.

From the restart, a handling error from the hosts allowed the Skolars to make metres from which Juma stepped through a tackle and crash over for his second try of the contest.

A late shot on Phoenix Laulu-Togaga’e shortly before full-time would see Mike Greenhalgh sent to the bin with Miller adding a further two from the boot to put the gloss on a well-deserved Cougars victory.