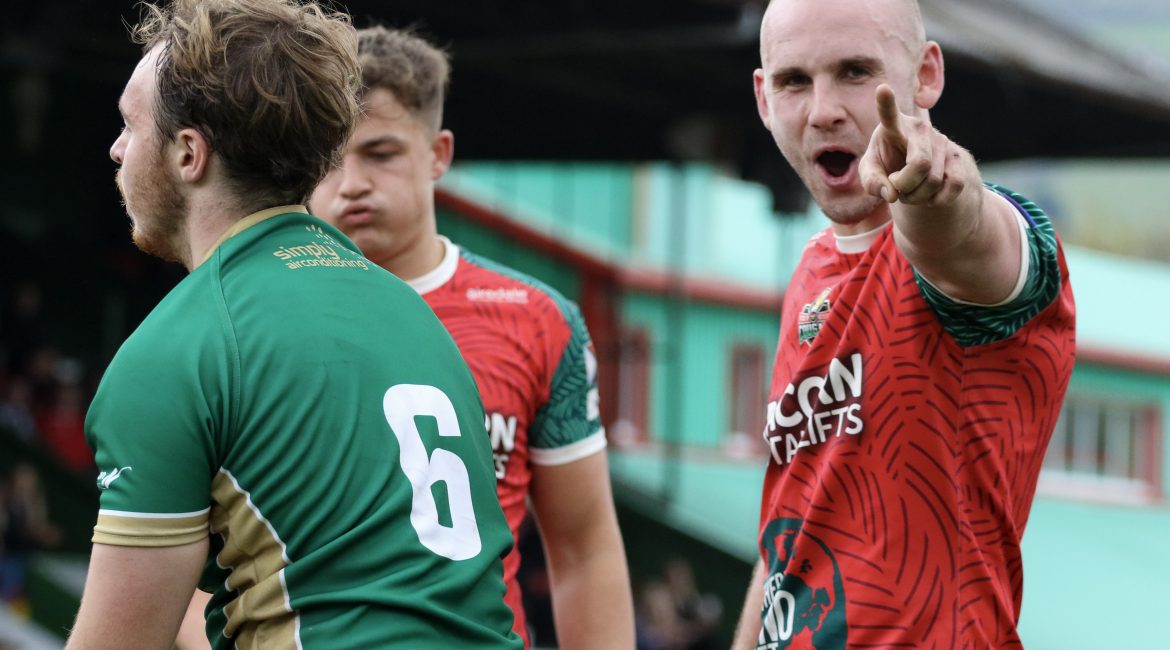 KEIGHLEY Cougars maintained their 100% record at the start of the new Betfred League 1 season with an emphatic home victory against the London Skolars.

The 96-0 result saw several records broken as 10 different players would cross the line for 17 tries, Jack Miller contributing with 14 conversions from the kicking tee.

And on an afternoon in which the Cougars dominated in front of an outstanding home crowd of 1,148, it paid a fitting tribute to the late Danny Jones ahead of the 7th anniversary of his passing on Tuesday.

The first half blowout started with just 90 seconds on the clock, when the Cougars forced a handling error and from the resulting scrum, the ball was worked out wide to Mo Agoro who fought his way over in the corner.

The Skolars downfall would continue at their own hands as Abevia McDonald and Jarred Bassett collided chasing the same kick, Nathan Roebuck passing the ball of the ground to Agoro for his second try.

Relentless pressure continued to turn into points as Roebuck would break through an attempted tackle and offload inside to the supporting Lewis Young to race beneath the crossbar.

From the restart, the Cougars went the length of the field and on the back of a penalty, James Feather burrowed his way over from close range.

Feather then turned provider, weaving his way through the Skolars line to send Miller over despite the best efforts of Aaron Small to deny the Keighley captain.

Another break from the restart again saw the home side go the length of the field and Jake Webster would touch down for his first of the season.

And on the half hour mark, Roebuck finally got a try as he crossed unchallenged after Dalton Desmond-Walker was held short of the line.

On the stroke of half time, the home side would continue to turn the screw as Charlie Graham stepped inside of the wing and went through four London defenders to touch down.

The home side would start the second half in a similar vein to how they had played the first and would extend their lead further as Agoro completed his hat-trick by diving over in the corner on the back of a penalty for a high tackle.

Keighley would camp on the London line and get two further scores, the first seeing Young step through a tackle to seal his brace.

A London man would be left distraught after his missed tackle allowed Graham to race through a double.

Dan Parker then added his name to the scoresheet, crashing over from close range.

And from the restart, the home side would again go end-to-end with Billy Gaylor racing home to mark his return from injury with a try.

The onslaught was never ending, and Agoro fended off the interests of McDonald to score his fourth of the afternoon.

Another break from a kick-off followed, Feather stepping through an attempted tackle and offloaded to Kyle Kesik, allowing his fellow hooker to score.

Parker then scored his second, fending off three would be tacklers go behind the sticks.

The Skolars though refused to give up and pushed for a consolation score in the games closing stages, however they were met with tenacious defence as Rhys Lovegrove’s side secured a second consecutive shutout.

Keighley though responded to the late London attacks but couldn’t find their way over the line as they looked to keep the scoreboard ticking over as the clock run down.

And the icing on the cake finally came on the hooter as Roebuck walked in for his second try.