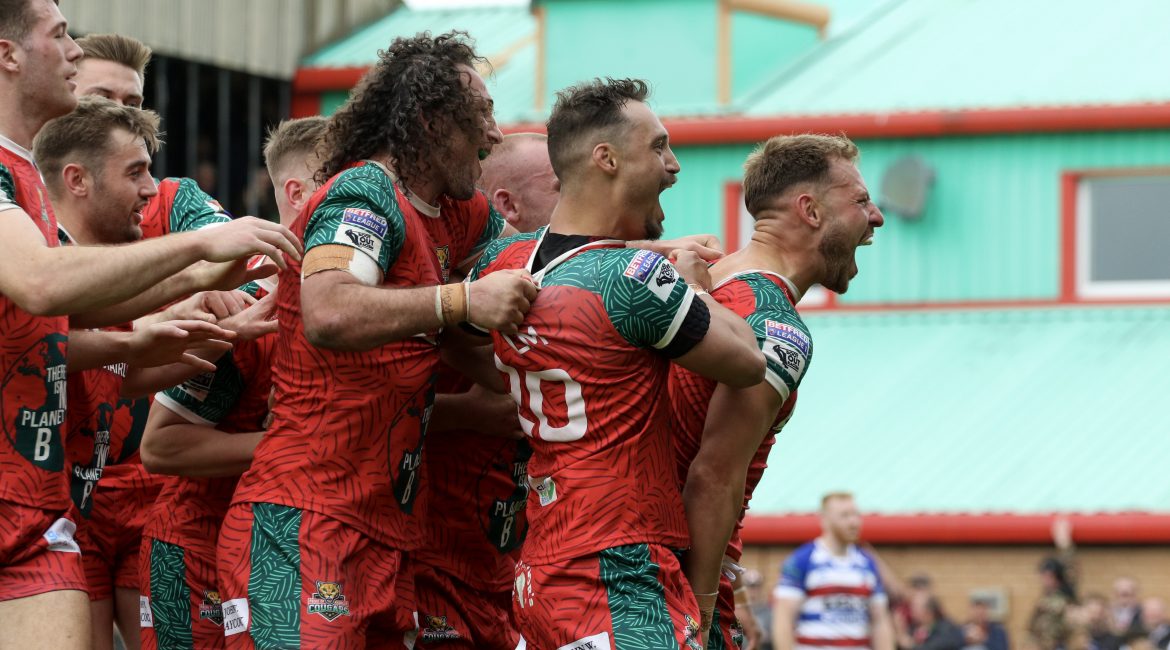 KEIGHLEY Cougars turned on the style for a second-half blitz that saw them see of Rochdale Hornets in an early season promotion four pointer.

Heading into the game sat second and third in the standings, the game between these two sides was in the balance until the hour mark where the numbers advantage created by ill-discipline from Rochdale allowed Rhys Lovegrove’s side to open the floodgates to victory.

The Cougars opened the scoring inside the opening three minutes, as the veteran James Feather scored for a third consecutive game as he raced over from dummy half.

It was a real war of attrition between the sides in the searing Yorkshire heat, but Jake Webster’s 350th career appearance was brought to a premature end after he was taken injured from the field.

The Hornets then levelled proceedings after a period of sustained pressure, Jy Hitchcox recovering from a big hit from Mo Agoro to shift the ball out the wide and Cian Tyrer took advantage in the corner.

The visitors then took the lead, on the back of some trademark Rangi Chase magic they broke down the field and Lewis Sheridan forced his way over despite the best efforts of Brenden Santi to deny him.

However, the home side finished the half strongly to take a narrow lead into the interval.

They first levelled the scoreboard as Lewis Young raced across the face of the Rochdale defence line, and once Hitchcox committed to tackle the full-back, he sent Nathan Roebuck through the space left behind to walk in for the score.

As the hooter sounded, Jack Miller nudged his side in front from the boot after the visitors were penalised for offside near to their own line.

The second half began with both sides completing regularly as they looked for the breakthrough.

Miller’s boot would keep the scoreboard ticking over as he took the two on offer after the Hornets were again penalised for offside near to their own line.

Rochdale’s ill-disciplined start to the second half finally raised the ire of official Liam Rush, who sent Paul Brearley for ten minutes in the bin after consecutive penalties against his side.

Miller again took the two on offer, converting much to the pleasure of the healthy crowd of 1,847 in attendance.

But the yellow would galvanise Matt Calland’s side and they would again even the game up after forcing a knock-on from the restart.

They made their way to the line, and Ben Killan forced his way over from close range much to the frustration of Keighley’s defence.

However, Killan was sin-binned minutes later for a high tackle and the floodgates would open.

From the resulting penalty, Charlie Graham managed to fight his way through three would be tacklers to somehow ground the ball.

The restart saw Keighley go the length of the field from a Matthew Bailey line-break.

They would work the ball to the right edge, where Agoro was on hand to fend off Tyrer and score in the corner.

Another break from the kick-off extended their lead in a period of dominance.

Dane Chisholm stepped through the Hornets line and offloaded inside to Miller, who had the support of Billy Gaylor, but the Keighley skipper didn’t need it as he ducked a challenge from Gregg McNally to dive over.

Agoro then wrapped up the victory, storming over after Chisholm would again open the Hornets defence.

The visitors would push for a consolation score in the games closing stages, but were repressed by outstanding defence as shown when Rob Worrincy was bundled into touch and into the Cougars dugout.