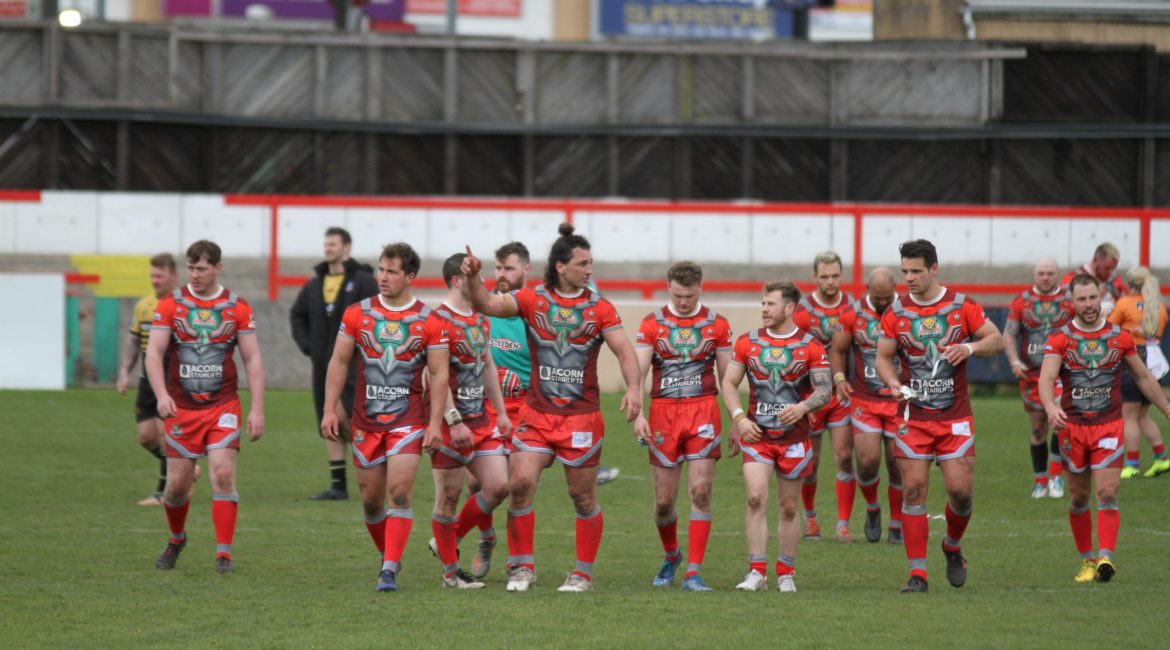 KEIGHLEY Cougars fell to a second consecutive defeat as the Rochdale Hornets held off a late fightback to head back across the Pennines victorious as fans returned to Cougar Park after an absence of 463 days.

Three tries in five minutes saw Rhys Lovegrove’s side get back within a point of the Hornets, but in truth an error and penalty filled performance for the most part left the Cougars with too much of a hill to climb.

Keighley had the better of the opening exchanges and if not for staunch Rochdale defence to hold up both Billy Gaylor and Jack Arnold, they would have scored the first try of the game.

But a late shot on Jack Miller following a kick to the corner from Lewis Galbraith allowed the half back to dust himself off and take the two points on offer.

Galbraith would make amends minutes later, scoring after the Hornets broke down the Cougars left edge.

Rochdale would extend their lead further, much to the anger of the returning Cougars fans, as Ryan Forshaw appeared short of the line as he burrowed his way over, the referee however deemed he had made the whitewash.

Cougars needed something special to get back into the game and they go just that through Taylor Prell as the winger broke through the line and weaved down the field before offloading to the supporting Alfie Seeley, who dove home underneath the crossbar.

The home side would then take the lead temporarily through Scott Murrell, the veteran taking a quick tap and going 20 metres to tumble home in the corner.

But the first half would continue to swing back and forth, and a strong finish to the forty give the Hornets the lead at the interval.

They would retake the lead through Gavin Bennion as the Wales international stepped through a bus sized gap in the Cougars defensive line to slide his way over.

A hint of controversy would come with the next Rochdale score, Shaun Ainscough appearing to be offside from the kick, but the winger would touch down in the corner.

The hooter then sounded but Rob Fairclough still found the time to put his name up in lights, with an outstanding drop goal from the touchline.

Fairclough would then start the second half the way he finished the first, in the points, as a cruel bounce from a kick caught the Cougars backline out and allowed the half to pick up the loose ball and race to the line.

And it seemed that Rochdale were easing their way to a comfortable victory with 15 minutes left to play when the veteran Fuifui Moimoi forced his way over from close range.

Three tries in 6 minutes from the Cougars then threatened to turn the game completely on its head as life returned to the sombre terraces at Cougar Park.

Aaron Levy would take advantage of a spilt ball to get himself to the line before both the following two restarts would both catch the Rochdale defence napping through Cougars breaks.

Charlie Graham, the Cougars man of the match on the afternoon, would first step a tackle and go 90 metres to round behind the uprights.

Murrell would then break the line and send the supporting Jack Miller racing through to score in front of a jubilant Terry Hollindrake Stand.

The momentum appeared to shift into Keighley’s favour, but a knock on allowed Rochdale field position and they would take advantage to thwart the comeback as Ainscough found space in the corner to dive for his second, and the match winning, score.