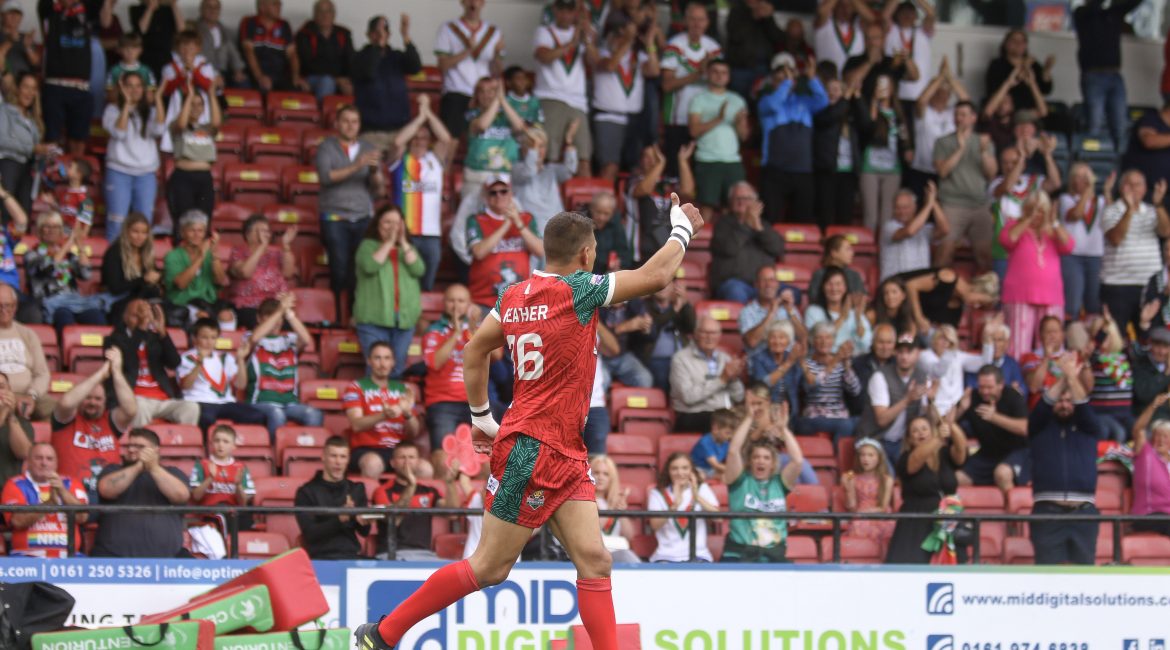 KEIGHLEY Cougars became only the third side in the history of professional Rugby League in Great Britain to record a perfect league campaign with victory at Rochdale.

Following in the footsteps of Hull FC in 1979, and Dewsbury Rams in 2009, the achievement whilst exceptional came through hard work against a Hornets side depleted to just 14 available players.

A cause which wasn’t helped after just six minutes when Fuifui Moimoi was forced from the field with a head injury, thankfully though the forward would return to put in a mammoth shift for his side.

After having a previous effort ruled out after failing to ground the ball once over the line, Charlie Graham would make no mistake in scoring the afternoon’s opening try, handing off Cian Tyrer to get over in the corner.

Rochdale were bringing it to the champions, but two errors on their own line would cost them dearly.

First, a wild pass from dummy half would bounce of Billy Gaylor’s knee as he moved from square marker, and he made the most by walking over the line to jump onto the loose ball.

The second error that led to points saw Tyrer make an absolute hash of a swirling kick to the corner from Dane Chisholm, Graham reacting the quickest to race onto the ball and score his second of the game.

Keighley kept up the pressure and on the back of an exceptional 40/20 from Chisholm, they created a numbers advantage with Alix Stephenson giving Tyrer the slip to dive over from close range on the back of a dummy pass that saw the full-back commit to the wrong man.

A battling performance though from the hosts would be rewarded shortly before half-time as Ben Killan powered over from close range on the back of a penalty near to the line.

Mo Agoro thought he had extended his tally for the season on the sound of the hooter, but the effort was ruled out for a forward pass in the build-up.

The Cougars started the second half brightly, a further two tries in the halves opening four minutes.

Inside 50 seconds, a Chisholm grubber in goal was raced onto by Junior Sa’u.

And from the restart, the away side would go the length again as Agoro broke a tackle 30 metres out and sped to the corner for his 28th try of a superb individual campaign.

Rochdale though would not go down without a fight and responded with two scores of their own.

Moimoi crashed his way over from close range on the back of a penalty near to the Keighley line.

Gregg McNally would follow soon after as he intercepted a wild pass inside his own half from a Cougars man and raced 60 metres to spark life back into the home support.

Any hopes of a Hornets comeback though were extinguished by three quickfire tries from Rhys Lovegrove’s side.

After period of sustained pressure, Harvey Spence exploited a tiring defensive line to dive over.

James Feather then marked his 367th and final appearance for his hometown club with a trademark show and go to burrow over from close range.

Sa’u then sealed his brace of tries by breaking a tackle and rounding the posts from the restart.

The home side were valiant in the face of adversity, and it showed as Aiden Roden somehow grounded beneath a pile of bodies as the game entered its closing stages.

Lewis Young though wrapped it up for Keighley, chasing down and scoring his own kick behind the Rochdale defence with only seconds remaining on the clock.