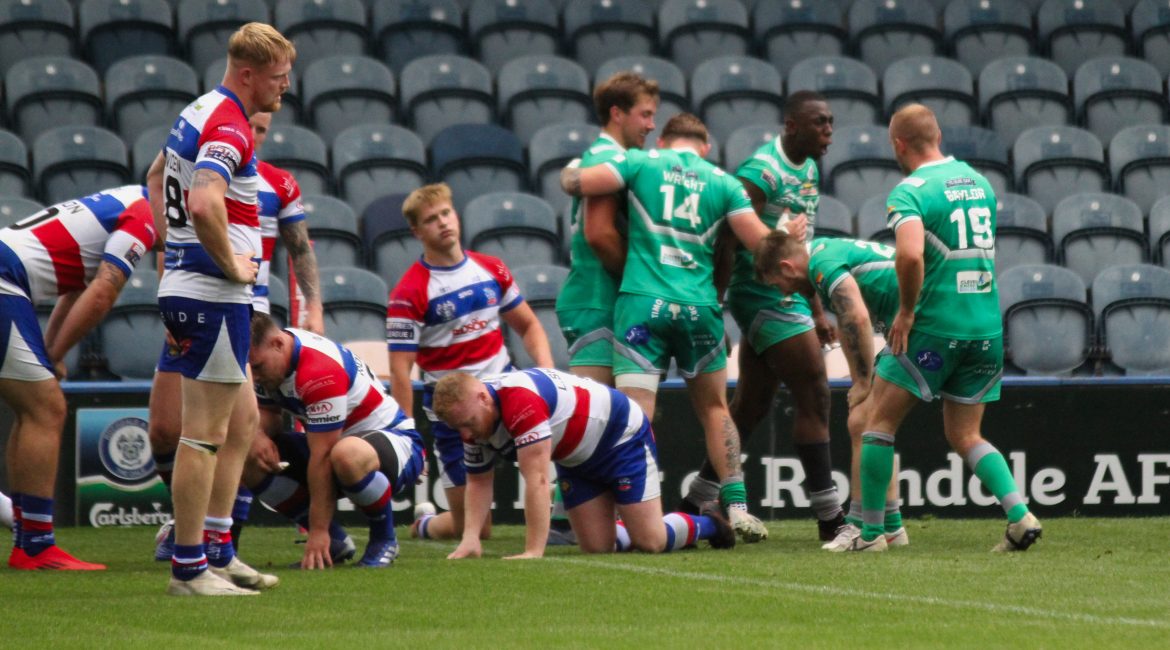 KEIGHLEY Cougars finally banished their away day blues with a 20-42 victory over the Rochdale Hornets.

A lot has changed in the world since the Cougars last won on the road at Coventry back in August 2019, but the scenes of jubilation at full-time both on and off the field at Spotland gave a feel of normality returning.

In truth, the visitors couldn’t have started the game better as Taylor Prell would score inside the opening 60 seconds.

On the back of a penalty for a high tackle on Brenden Santi, Prell broke a tackle and fought himself into the corner to touch down.

They almost increased their advantage instantly as Kyle Kesik tried to burrow his way over, but the Hornets defence kept the hooker out.

Rochdale then slowly grew into the game and got their rewards as Will Tate dived over in the corner after Mo Agoro was tackled into touch.

The game would swing back and forth but shortly after the half hour mark, Keighley took hold off the arm wrestle and did not relent throughout the remainder of the contest.

After being denied just seconds before, Josh Slingsby would dive over in the corner after great support play from both Scott Murrell and Charlie Graham.

Prell would then score his second try after he intercepted a pass over the top and raced 60 metres to dive over near to the corner.

And then as the hooter sounded, Agoro would score after a quick change of direction saw the Cougars shift the ball to the right edge and leave the Rochdale defence at sixes and sevens.

The home side threatened to come back into the game early in the second half as a Danny Yates pass took a deflection off the head of Dalton Desmond-Walker, allowing Tate to pounce on the loose ball for his second try.

Rhys Lovegrove’s side responded immediately as they forced a knock-on, and a wicked curling kick from Jack Miller was plucked out of the air and touched down by Agoro as he outjumped Dan Nixon.

The Hornets would deny both Ryan Wright and Con Mika, but a break from Josh Jordan-Roberts left the Keighley defence scrambling and it allowed Joe Taira to walk the ball over beneath the crossbar unchallenged.

Miller then put the difference between the sides back to three scores as he converted a penalty goal after the home side were penalised for offside near to their own line.

Rochdale were reeling once again, and after a penalty for obstruction on Prell, the Cougars would create an advantage on the overlap and Aaron Levy made the most of the space in front of him to race through and slide over.

Things began to heat up on the pitch and it resulted in Rochdale being placed on a team warning by the officials.

It would continue shortly after with Wright and Taira exchanging their disagreeing views after Murrell forced a forward pass, but consecutive penalties would allow the away side to work their way back up the field.

And an outrageous chip and chase early in the tackle count would follow from the restart and it paid off as Ben Stead raced through the defensive line to touch the ball down.

The Cougars would however lose Levy to a head injury assessment minutes later as he put his body on the line to deny Gavin Bennion from close range.

However, it was the home team that would have the final say on the afternoon as Nixon dove home in the corner for a consolation effort with the clock ticking down.