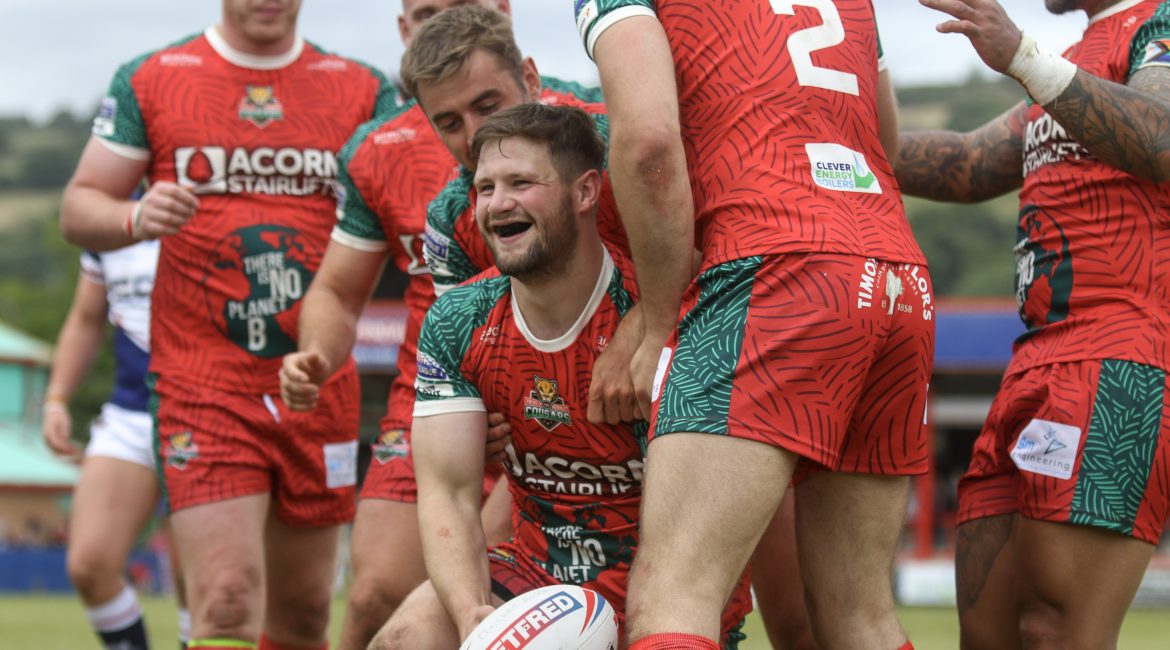 KEIGHLEY Cougars extended their unbeaten start to the season with an eleventh consecutive victory at the expense of Oldham.

Rhys Lovegrove’s side opened the scoring early in proceedings and didn’t take their foot of the pedal throughout the encounter as they maintained their four point advantage over Swinton, who sit in the second table after the opening eleven rounds,

The home side got off to a dream start, as they won the ball from their own kick-off and with 29 seconds on the clock, Jack Miller stepped through the line to dive over before adding the extras himself.

And the dream start would continue when after forcing a knock-on, Dane Chisholm and Jack Miller would link-up to break the Oldham line and with a numbers advantage created, Jake Webster walked the ball home in the corner.

The Cougars thought they were in euphoria when Mo Agoro dove in at the corner, but the touch judge ruled the winger had gone into touch.

They would find that third try though in the 16th minute, as Lewis Young broke the Roughyeds defensive line and offload inside to the supporting Miller, who fought off Owen Restall to crash over for a second.

Agoro then extended his try-scoring run to a ninth consecutive mate, as the winger rounded his opposite number after Keighley created a numbers advantage on the right edge.

Oldham were struggling to handle the red wall coming at them, and just before half-time, Nathan Roebuck would intercept a pass and race 60 metres to touch down beneath the dot.

And the visitors misery was compounded seconds before the hooter, as they lost Dec O’Donnell to a serious arm injury.

The second half began with the Cougars being temporarily reduced to twelve after Dane Chisholm was shown a yellow card for having one word to many to say the official.

However, Eddy Pettybourne would mark his debut with a monster hit to force a knock-on.

And from the resulting scrum, his fellow debutant Junior Sa’u would mark his bow with an acrobatic effort in the corner on the back of great link-up play once more from Miller and Young.

Charlie Graham thought he had increased the advantage further, but his quest for a try in a tenth consecutive match was halted by a last ditch tackle that forced the ball loose.

Agoro though extended his season tally to 18 tries, fighting his way in the corner after taking a long ball over the top from Chisholm.

And moments later, Aaron Levy read a short ball from Miller superbly to race onto to the ball and crash over from close range.

Keighley were playing with flair, and it showed with their next score as Chisholm threw an outrageous no look pass from behind his own back to send Roebuck in for a second.

Callum Cameron then had his afternoon ended early by the officials, as he was sent to sin-bin for a late challenge on Young.

Connor Carr soon followed him to the bin after he committed a professional foul to halt a length of the field break from Chisholm.

And with a two-man advantage, Keighley put the icing on the cake.

Dan Parker would roll through an attempted tackle to find the line and touch down.

From the restart, Agoro broke the Oldham left edge and looked up to shift the ball inside to James Feather, the veteran hooker following up the line break to back him up and race 40 metres to touch down and put the seal on the victory.