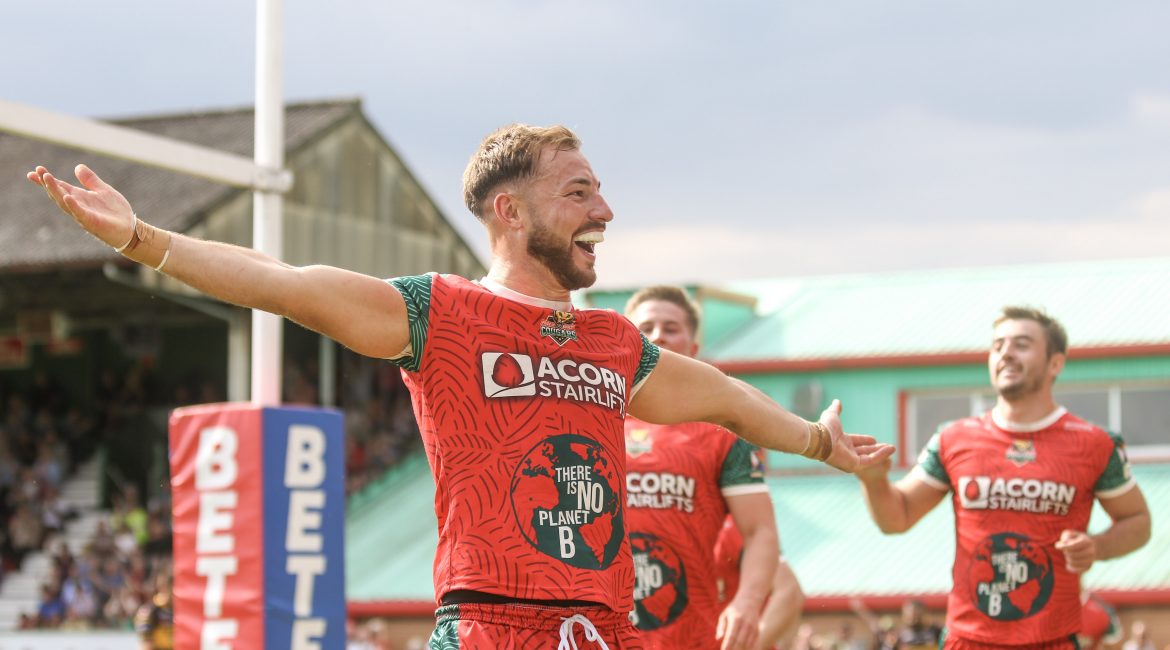 KEIGHLEY Cougars celebrated their lifting of the Betfred League 1 trophy in style, defeating the North Wales Crusaders in a meeting of the division’s top two sides.

On a memorable afternoon at Cougar Park, a crowd of nearly 3,000 packed inside to see the Cougars lift their first divisional title since the days of Cougarmania.

Rhys Lovegrove and his side were greeted to the pitch by a guard of honour by their visitors, with the Colwyn Bay outfit showing class on and off the grass throughout the afternoon.

The Crusaders though are a team that pride themselves on not reading the script and decided to play the role of party crashers early on as Jack Holmes broke through a tackle and offloaded inside to the supporting Jack Houghton.

Keighley though, as they have so many times this season, came straight back into the game as good hands from Jake Webster shifted the ball out the tackle to the wing where Charlie Graham was on hand to dive over.

And the turnaround came shortly before the quarter mark as Aaron Levy came up with a superb line break and opted to offload inside for Jack Miller to round the uprights.

This would open the floodgates as in the minutes that followed, the home side found their way over for another two scores.

James Feather, on his final Cougar Park appearance, burrowed over close to the line from a play the ball.

Then on the back of a scrum just moments later, Graham stepped through a tackle and raced home in the corner much to the delight of the home crowd.

Keenan Dyer-Dixon then thought he had marked his Keighley debut with a try, but his heel unfortunately touched the dead ball line.

North Wales tried to get back into the contest on the half-time hooter, but tenacious line defence kept them at bay with Brad Brennan being held up.

The beginning of the second half was more a drab affair, Feather being sent to the sinbin for a late hit on Brad Billsborough after the pass was made.

And on the back of the penalty, the visitors worked the ball wide for Pat Ah Van despite complaints from the Keighley defence that he was in touch.

Keighley though, as they have done all season, would turn the screw and find two tries despite the man disadvantage.

On the back of a penalty, they created an overlap on the left and Alix Stephenson made the most of the opportunity presented to sprint through and dive home to continue his fine run of form.

The Cougars were rolling, and Miller raced beneath the dot on the back of a superb line break from Lewis Young after he evaded a tackle near halfway.

The party was in full swing, and Webster helped himself to four points on the back of great dummy half play from Feather after Scott Murrell was held short off the line in his efforts to mark his final home game before retirement with a try.

Murrell then turned provider for a memorable afternoon’s final home try, a superb no look reverse curling kick to the uprights which was plucked out of the air and touched down by the Young as the fullback did a superb roll in the air.

The Crusaders had the final say though as Massam crashed over in the corner, but it was nothing more than a brief moment delay to the celebration that followed the afternoon’s game.