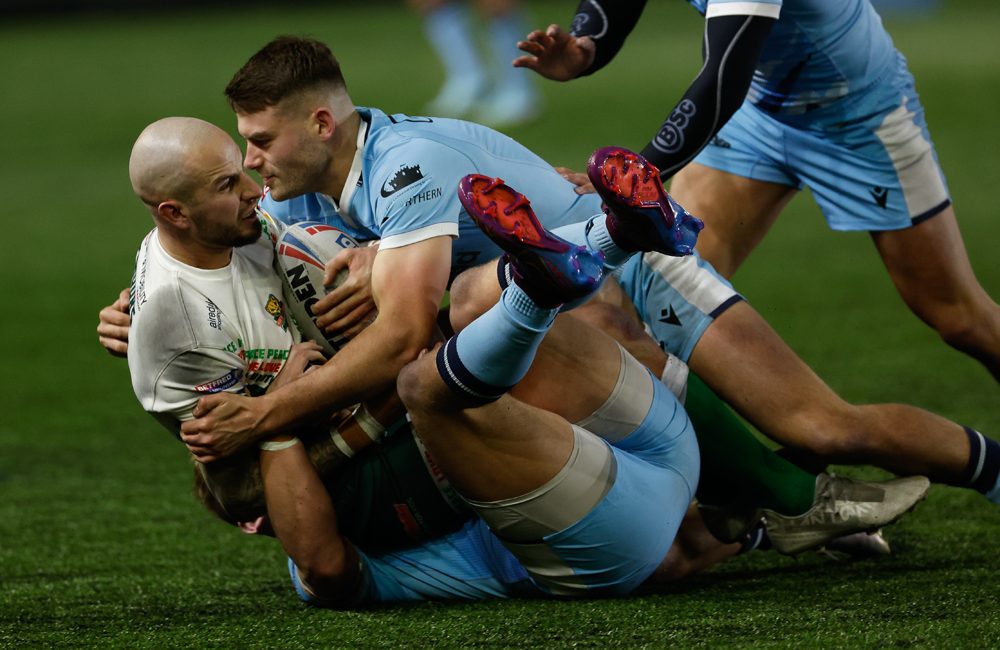 KEIGHLEY Cougars continued their preparations for life in the second tier after promotion with a victory away at fellow Championship side Newcastle Thunder.

The two sides, who meet at Cougar Park next month in Round Three of the Championship season, were both putting into practice for the first time everything they have learned in pre-season thus far in Chris Thorman’s first game as Head Coach of the Thunder.

Despite having the better of the early exchanges, Keighley were twice saved by the referee’s whistle.

Alex Young and Alex Clegg both touched down in the corner within a minute of each other, however Nick Bennett in the middle disallowed both efforts for forward passes in the build-up.

The hosts would though open the scoring as Evan Lawther fought through an attempted tackle to ground the ball on the back of a six again being awarded in Newcastle’s favour on the line.

Momentum had shifted to Thunder as the game began to become an even contest. but the friendly moniker was briefly thrown into touch with Keenan Dyer-Dixon as the two sets of players decided to heat up a cold evening on Tyneside.

Keighley thought they had levelled up the scoreboard on the half-hour mark as Dyer-Dixon raced in at the corner, but his effort became the third of the evening to be ruled out as the result of a forward pass.

The Cougars thought they had levelled the scoreboard shortly before the interval but Alix Stephenson was bundled into touch by Alex Clegg as the line was teasing the Keighley winger minutes before the referee blow up for the end of the opening forty.

But on the brink of the half-time hooter, the Thunder nearly doubled their lead.

A kick on the last from Nikau Williams took a wicked deflection of the post protector forcing Lewis Young, on his first return to his former club since departing, to scramble and recover the ball with Marcus Walker on the hunt for the vital touch.

The second half though would see the game spring into life as both sets of players had blown off the apparent cobwebs.

The Cougars took the lead on the back of some clever play as they loaded up their right edge and Robbie Storey took full advantage, handing off a Newcastle defender to round the posts and touch down. Jack Miller adding the extras.

Thunder would soon have the lead back, a kick in goal by Williams was not dealt with by Storey and Brad Gallagher would pounce onto the loose ball and ground for the try.

The game was now ebbing and flowing, the Cougars would themselves regain the advantage as Alix Stephenson stepped through a number of Thunder defenders on the last to dive over to the left of the sticks.

From the restart, the visitors would give themselves breathing space as Storey took a monster of a carry which saw him run straight over the top of Gallagher and proceed 60 metres to the line for his second of the evening despite the best efforts of a scrambling Newcastle defence.

Newcastle would not go down without a fight however and would again close the margin between the sides down to six points with sustained pressure.

Connor Bailey powered himself underneath the crossbar with a marauding run yet Jack Potter somehow managed to scuff the conversion from in front wide.

Thunder pushed for a try to level up the scoreboard. but Mark Ioane put the game beyond doubt with five minutes left on the clock as the forward scored from a strong carry from close range.