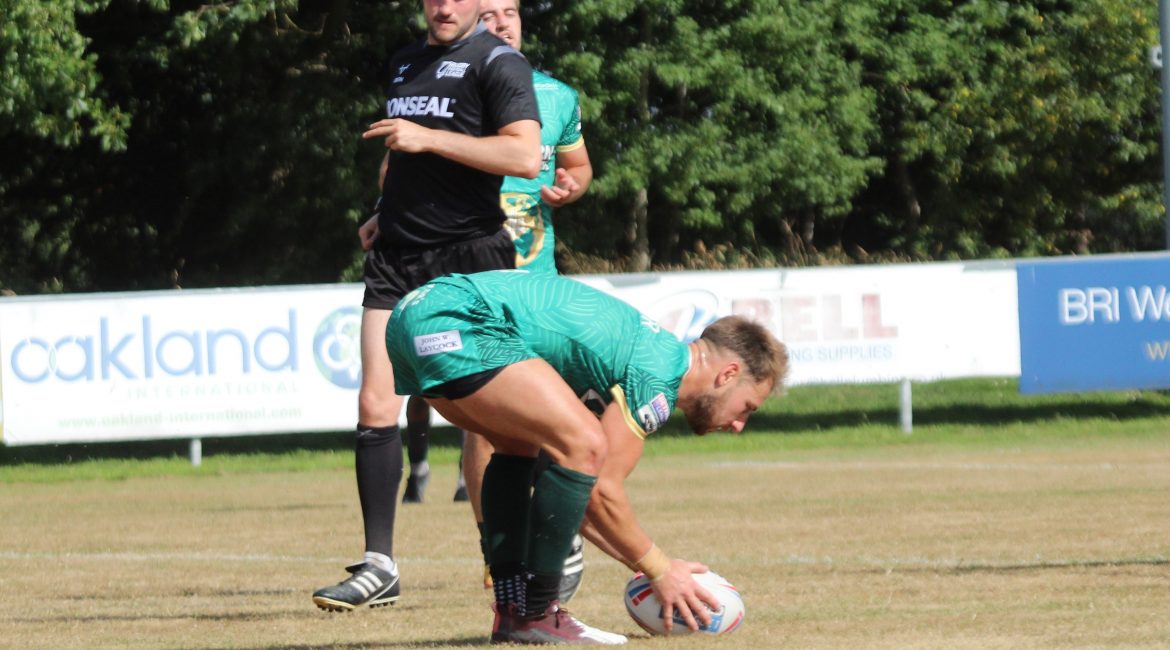 Keighley Cougars took another step towards achieving promotion with a professional performance to seal a comfortable away victory over the Midlands Hurricanes.

Despite arriving late to the ground after the team bus tyre had blown out, Rhys Lovegrove’s side overcame the adversity caused by the journey to run in another ten tries to make it 15 wins out of 15.

After bundling the hosts into touch from the kick-off, the Cougars opened the scoring on the back of a scrum as Aaron Levy fought through a tackle to force his way over from close range.

With the wind playing havoc with both sets of players, the visitors would extend their lead on the quarter of the hour mark.

Opting to play on the last tackle, Dane Chisholm and Junior Sa’u linked up to give Mo Agoro a walk-in at the corner.

The Hurricanes looked to get themselves back into the game but were denied on the line by two outstanding challenges by Charlie Graham and Kyle Trout.

Keighley would hit back with Levy’s second try of the afternoon, the back rower stepping through an attempted tackle to touch down.

And from the restart, Jack Miller broke the Midlands line who offloaded to Toby Everett, the forward sidestepping Elliott Hall and marauding over next to the uprights.

But just before the interval, the home side became the first to breach the Cougars defence in 355 minutes of Rugby League as Chris Cullimore bundled his way over against his parent club.

The second half though would be scintillating by Lovegrove’s charges as they ran in 36 unanswered points to reduce the hurricane to a light breeze and send the 200 strong away following home happy.

Just three minutes into the half, Jack Miller forced his way through with a lovely show and go near to the line on the back of a dropout.

A Chisholm 40/20 shortly after the restart put the Cougars into good field position and they made it count.

They would opt to again keep the ball alive on the last tackle, and Everett powered over beneath the crossbar from three metres out.

Ben Stead then thought he had a second try for the home side as he intercepted a pass and broke down the field, but the former Cougars man was chased down by Chisholm.

Keighley were quickly in again though on the back of a penalty.

George Collins was penalised for a shoulder charge on Alix Stephenson, but the winger quickly got himself back up and ducked a swinging arm to dive home.

With the Hurricanes pack tiring, the visitors would continue to roll down the middle of the park and turn the screw.

After a superb kick chase caused a knock-on, from the resulting scrum the two Cougars halves linked-up with Chisholm creating an overlap for Miller to walk through and score.

The hat-trick would soon follow for the Keighley skipper.

Lewis Young broke a tackle, and as a result the Midlands defensive line, and raced up the field before selflessly offloading inside to the supporting Miller to race home for his 14th try of the season.

Cullimore and Trout would then clash heads on the line, both players being taken from the field to be stitched up by the match doctor.

After play was restarted, Keighley put the icing on the cake to send the travelling fans home even happier.

The ball was shifted wide to the left edge, and after a grubber kick was played at by Matt Welham, the referee wiped the tackle count and Stephenson stepped inside of his wing to score.