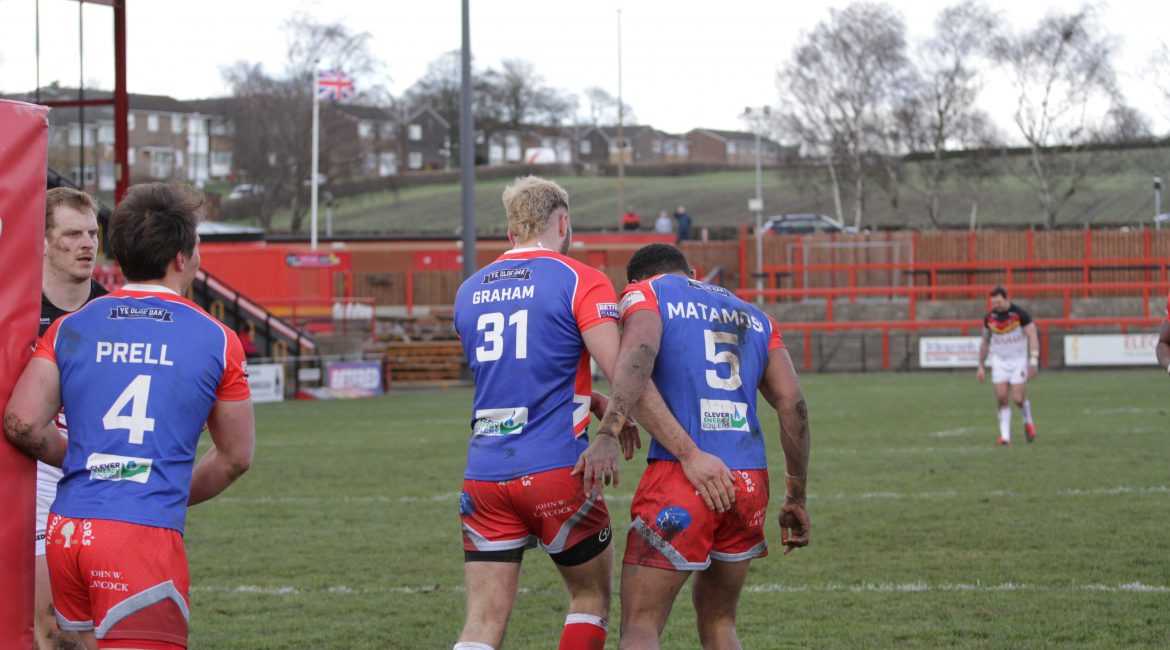 The were plenty of positives for Head Coach Rhys Lovegrove and his side to take from the narrow defeat, with the only sour note being the serious injury sustained by Alix Stephenson in the second half.

But Lovegrove is now looking forward to seeing what his side can do on a dry track in this week’s Betfred Challenge Cup tie away at the London Broncos.

“The boys had fun, and that was my first and foremost remit to the players,” said the Cougars Head Coach.

“I knew it wasn’t going to be pretty, the weather and the pitch were not conducive to our style of play so I was really interested to see how the players adapted to that and I was really happy with how they reacted.

“We move onto London now this weekend and it will provide a very different challenge, London are a different team in terms of style to Bradford and with the game being played on 4G, it will be a different surface too.”

Understandably slow out of the blocks after an absence of 370 days, the opening ten minutes appeared to be setting the Bulls onto a comfortable victory.

Despite an outstanding kick chase by Robert Matamosi forcing a goal-line dropout from Joe Brown, once the home side got possession back, they would punish the Cougars.

Danny Brough kicked an outstanding 40-20 on the last tackle to put Bradford into an attacking position and from the resulting tap restart, they worked their way to the line for Thomas Doyle to squeeze over with a show and go from dummy half.

The Bulls would then win a penalty from the kick-off and again worked their way down the field where Brough would hand off an attempted tackle by Kieran Moran and swerve his way through the Keighley defence to dive over the line.

Reece Hamlett had a try in the corner disallowed for a forward pass in the build-up from Brandon Pickersgill, but then the Cougars settled and came fighting back into the contest.

The introduction of Jack Arnold, playing for the first time since August 2019, from the bench sparked life into the visitors and Bradford had no response in defence.

Jason Muranka had a try disallowed for offside from a QLT grubber, but the Cougars would then half the deficit on the scoreboard in spectacular style.

Charlie Graham intercepted a long pass over the top from Pickersgill and raced 60 metres before rounding to touch down between the sticks.

And almost immediately, Lovegrove’s side were back in to level up proceedings as a Billy Gaylor kick was carried by the wind into the arms of the onrushing Arnold, who took the ball and barnstormed to the line where he offloaded out the tackle for Gaylor to score.

The first half would end though with both sides coming to blows after Elliot Wallis appeared to headbutt Taylor Prell after reacting badly to a tackle.

Bradford started the second half strongly, Ross Oakes crossing to re-establish a lead for John Kear’s side on the back of a penalty for interference.

Both sides would complete sets and exchange possession regularly until Alix Stephenson went down in a tackle and was stretched from the field with what would be later confirmed as a broken fibula that requires surgery.

With Cougars minds elsewhere, the Bulls were quick to make the most of it and Anthony Walker powered his way through from close range to go over beneath the crossbar.

In the 63rd minute, Keighley Rugby League history would be made as Phoenix Laulu-Togaga’e came off the bench to take to the field alongside his father, Quentin.

And it was nearly a headline making start as Phoenix stepped through a tackle and sent Quentin racing through, but the official pulled play back for a forward pass.

The Cougars would have the final say on the afternoon when after Zach Braham was held up, QLT would expose a gap within the Bradford defensive line to send Graham through for his second try of the afternoon.