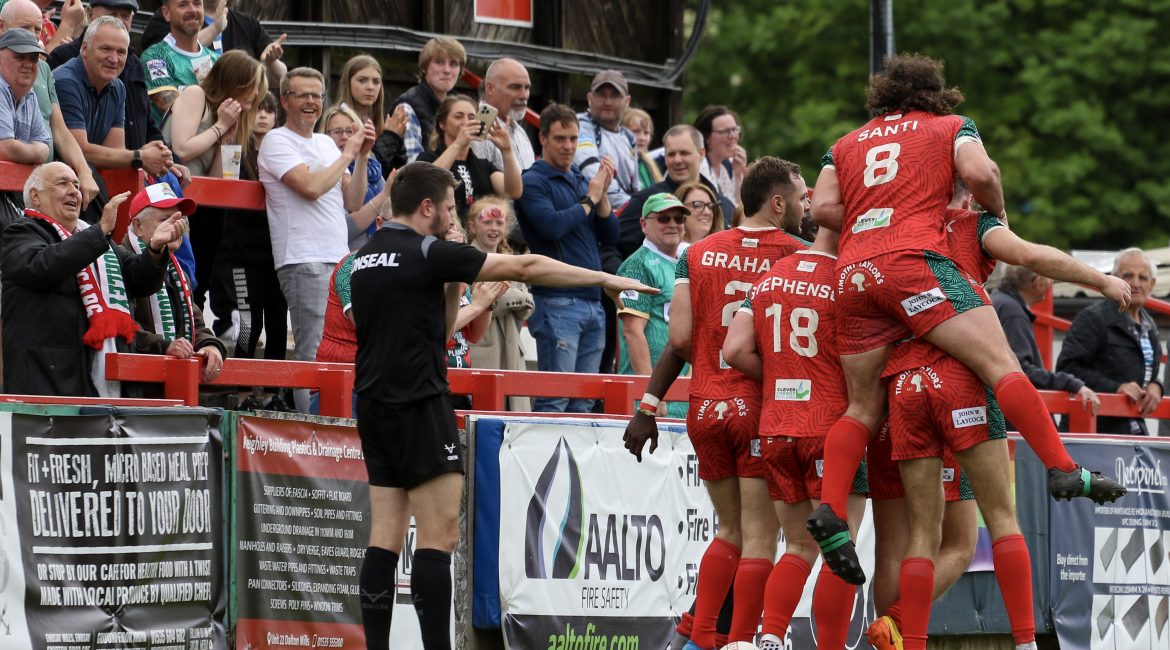 KEIGHLEY Cougars moved to the top of the Betfred League 1 table as they saw off a spirited Midlands Hurricanes side at Cougar Park.

The Hurricanes threatened to inflict the Cougars first defeat of the season as they provided the sternest test of the year to date, but a late double from Mo Agoro saw the home side over the line.

The win also maintained the Cougars 100% record in the league this season to set up a mouth-watering top of the table clash away at fellow undefeated side North Wales Crusaders in a fortnight’s time.

Charlie Graham opened the scoring on the afternoon, stepping through the line after the visitors had been penalised for a high tackle on Mo Agoro.

The Hurricanes had an opportunity to level, but Jack Dawson was held up as he looked to touch down.

It would be Keighley who extended their lead through the boot of Jack Miller after the Midlands were penalised for offside near to their own line.

And the visitors ill-discipline would continue to cost them as Benn Hardcastle was sent to the sinbin after not releasing the tackled man after the referee’s repeated calls.

The Cougars found a second try of the afternoon shortly after, Nathan Roebuck forcing his way over in the corner after handing off Matt Welham.

From the restart, the Hurricanes forced an error and back in possession near to the line, Jack Dawson powered his way over from close range.

Injuries were taking its toll for Rhys Lovegrove and his side as he lost both Dalton Desmond-Walker and Dan Parker.

And the visitors thought they had got themselves back within two points as Hardcastle touched down in the corner.

However, the touch judge would have a massive say in a pivotal moment, overruling the referee’s tackle count to disallow the effort and turn possession over to the home side.

Ill-discipline though would cost Midlands once more as Hayden Freeman was sent to the bin for delaying the restart.

The Cougars would go the length from the penalty, and after being awarded a set restart, they made the most of the numbers advantage as Roebuck walked the ball over the line near to the right-hand corner.

The Hurricanes though kept coming at their hosts and it was Brenden Santi who prevented them from scoring with a superb last-ditch tackle to hold up Dawson.

But after forcing Alix Stephenson to concede a dropout, the Midlands would find the score to get them back within six points.

Brad Clavering was presented the ball from 5 metres out, and the prop rampaged his way over from close range to make it a six-point ball game.

Dane Chisholm slotted over a drop goal after Keighley rolled down the middle of the field, and that one point would prove pivotal as the game reached its closing stages.

From a short restart, the away team regathered the ball and got within one point of their hosts as Matt Welham found a way through to score as the Midlands momentum continued to gather pace.

Hardcastle then attempted to convert a drop goal of his own to level the scoreboard, but he drifted the effort from the boot wide of the sticks.

Keighley would then go the length of the field from the restart and found the try to give them breathing space once more, Agoro fighting his way in at the corner.

The winger then sealed victory, putting in a big hit on Matt Welham to force a knock-on and he played the advantage from the dropped ball to race over from 70 metres.