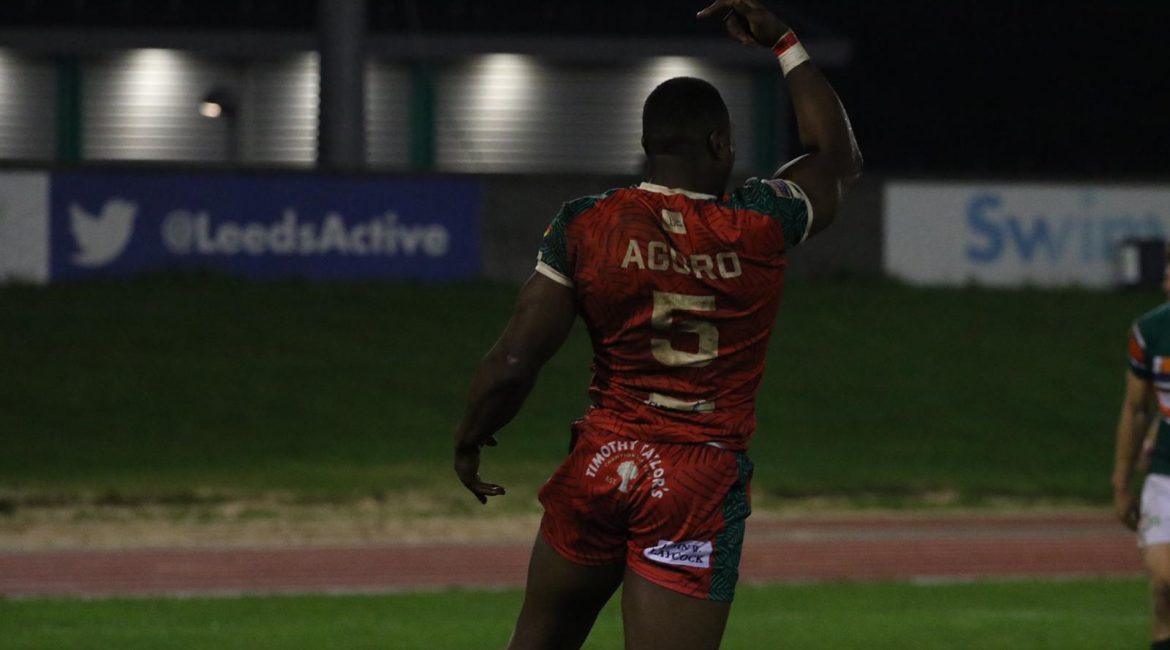 MO Agoro’s try 20 seconds from time saw the Keighley Cougars snatch victory from the jaws of defeat to maintain his sides 100% record at the start of the Betfred League 1 season.

Jack Sanderson’s third penalty conversion of the evening appeared to have won the game for his side, however the last gasp effort from Agoro saw the Cougars make it three wins from three at the start of the new season.

After an evening opening to proceedings, the boot of Sanderson would open the scoring and give Hunslet an early two-point advantage after the Cougars were penalised for offside.

Rhys Lovegrove’s side would continue to gift their opposition cheap metres and as a result, easy points.

Hunslet put a kick up on the last tackle, and Taylor Prell would knock on under pressure on his return to the side.

From the scrum, the Parksiders would pressure the Keighley line and get their rewards as Harvey Hallas powered over beneath the uprights against his former club to extend their lead.

But the Cougars wouldn’t remain scoreless on the board for long.

Keighley would force an error from the restart near to the posts, and from the scrum they worked the ball near to the uprights and Bradley Ho would power over from close range to score his first try for the club.

Hunslet then appeared to struggle as the visitors continued to pressure, and despite their best defensive efforts they would fall behind for the first time on the afternoon.

A grubber from Jack Miller forced the dropout and from which, Charlie Graham somehow managed to free an arm from a tackle to ground the ball and give his side the lead.

However, the Cougars were penalised for pushing the man off the mark and the boot of Sanderson would ensure the two side went into the interval level on the scoreboard.

From the start of the second half, the two sides would cancel each other out.

But it would be the visitors who got the first points of the second forty.

And after the home sides defence kept their opposition at bay, it was Jack Miller who would find a way over, turning through a tackle to give Keighley a four-point advantage.

However, the scoreboard would be levelled up once again shortly after.

Hunslet would make the most of a six again and penalty in their favour to work their way up the field.

From this, on the last tackle, Sanderson put a grubber to the corner from which Wayne Reittie won the foot race to ground the ball and again bring the two sides all square.

Both sides would continue to press to get the pivotal score, however two refereeing decisions that both coaches felt hard done by would end up proving the difference on the evening at the South Leeds Stadium.

The home side were the first to benefit, and they thought the decision in their favour would see them over the line.

Kieran Moran, against his former club, dropped the ball in the tackle. The officials though ruled the ball had been stripped.

The boot of Sanderson would give Hunslet a two-point lead and it appeared this would see the home side over the line for a second victory of the season.

But with the game in the final minute, the Cougars would snatch victory from the jaws of defeat.

Despite the pass appearing forward, the officials ruled it was flat and Agoro broke the line to win the game.