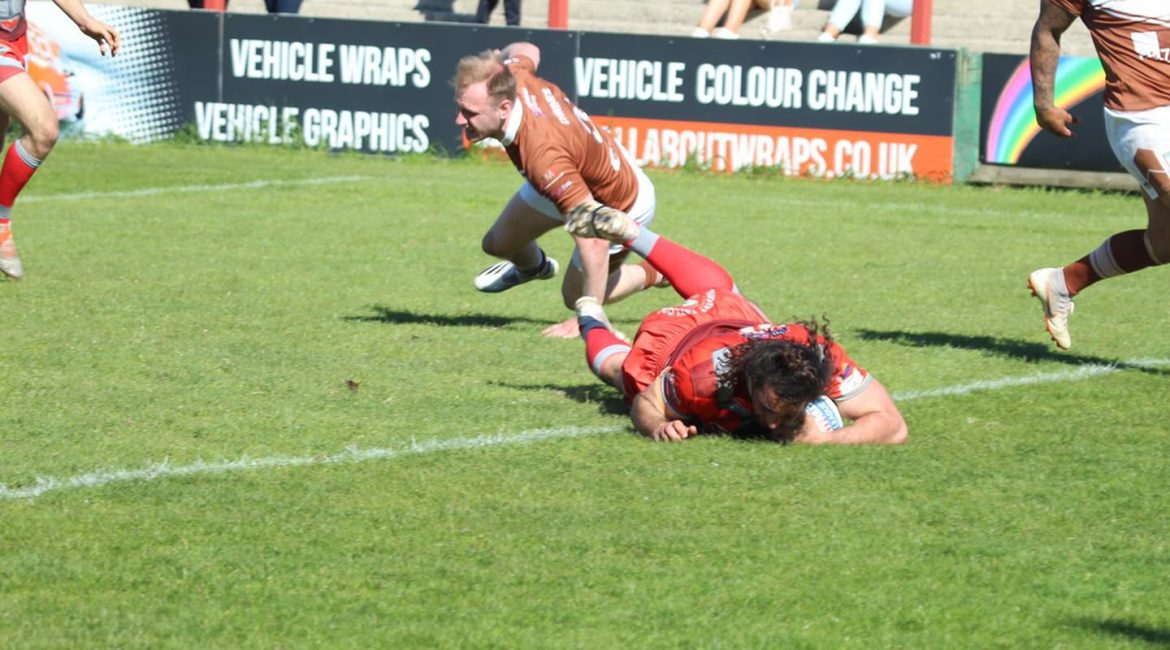 KEIGHLEY COUGARS bounced back from consecutive defeats as they grounded out a hard-fought victory over local rivals Hunslet.

An outstanding display in the final half hour of the game turned it on his head and allowed the Cougars to blow their visitors out the water after an opening 50 minutes which the defences of both sides controlled.

The first half, like the United Kingdom at Eurovision the week previous, ended with null point on the scoreboard.

Keighley came closest to opening the scoring in the game’s early exchanges with Matthew Bailey and Scott Murrell both knocking-on with the line gaping after the Hunslet defence was quick of the line to meet them.

The home side would then blow a further opportunity to put the first points on the scoreboard after Dan Parker broke through the line, superb scrambling defence from Matty Chrimes would force an error.

A penalty for offside would present Hunslet the chance to take the lead through the boot of Dominic Brambani, the half-back would however scuff his effort from 40 metres out and put the attempt wide of the uprights. Missing out on his 1500th career point in the process.

With the defences of both sides very much on top, the visitors nearly found a way over through Alex Rowe, but the prop would drop the ball as he attempted the grounding.

The searing heat was playing a part in the physical encounter as the forward packs controlled the play on both sides, and another opportunity for the first try went amiss as debutant Josh Slingsby couldn’t get his fingers to a kick to the corner from Murrell.

Fellow debutant Bobby Darbyshire then burrowed his way over the line on the stroke of half time, but the try was disallowed for obstruction, a decision that angered both Cougars players and spectators alike.

The start of the second half would follow the pattern of the first with the defences continuing to dominate, denying Darbyshire for the Cougars and then Tom Ashton from Hunslet.

In the 51st minute though, the home side would finally register the afternoon’s first points.

A handling error from the visitors near to the line gave Keighley the field position near to the line and they would finally take full advantage as Kieran Moran powered his way over from close range for his first try of the season.

This opened the floodgates as two more quick fire tries followed, the first seeing Jack Miller audaciously chase his own grubber and somehow managed to touch the ball down inches from the dead ball line.

And from the restart, the Cougars broke down the Hunslet right edge and Charlie Graham finished off a flowing team move by rounding the defence to dive over.

The onslaught would continue, Graham breaking through a gap in the defensive line and offloading to the supporting Brenden Santi who strolled his way to touch down.

Brad Hey then appeared to score a consolation effort, but he would see the effort ruled out for a knock-on.

This would be a blip as Graham then scored his second off the afternoon, sauntering over unchallenged after Miller was held up.

Santi would crash over twice in the final two minutes to complete his hat-trick and a good afternoon for Keighley.

He would first dive over after another line break by the Cougars created a numbers advantage from which the forward was the main beneficiary.

Then as the final hooter would sound, Santi would power his way over from close range after a tired Hunslet defence allowed the home side to breach them once again.