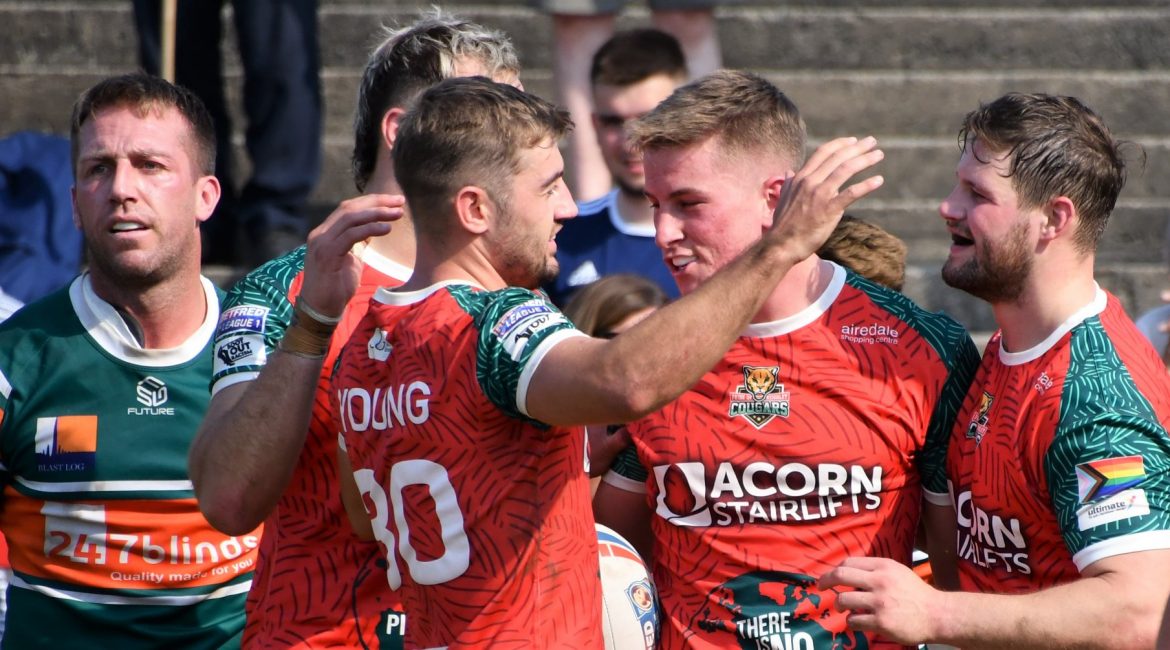 KEIGHLEY Cougars moved within one point of ending their eight-year absence from the second tier with a dominant derby defeat of local rivals Hunslet.

The opening half hour of the afternoon was an arm wrestle and everything you would expect from a blood and thunder rivalry in sweltering conditions.

But the sinbinning of Matty Beharrell for a professional foul would turn the tide and allow the undefeated Cougars to pull clear and blow their visitors off the park.

The early exchanges off the contest were played on the Hunslet line and the home side would open the scoring as Jack Miller opened up the defensive line with a show and go before racing through to touch down. He would also add the extras.

Mo Agoro would extend the lead as he powered his way home in the corner, his 27th try of a fruitful campaign, despite the best efforts of Mackenize Turner to halt the division’s top try scorer.

Hunslet though would keep themselves in the contest with some clever play with ball in hand.

And they thought that they had found a way back into the game when Beharrell’s short ball was run onto, and touched down, by Harvey Hallas.

However, Beharrell would be sent for ten after committing a professional foul near to the line by delaying a quick play the ball and it would cost his side dearly as they conceded 24 points without their general on the field.

From the resulting penalty a short ball from Billy Gaylor allowed Matthew Bailey to crash over the line from close range.

And with Hunslet bodies tiring under pressure, Aaron Levy broke the line from the restart and shifted the ball wide into the hands of the supporting Alix Stephenson, who stepped Jason Mossop to race round.

The Cougars found time before the break for one more try as Billy Gaylor managed to roll his way over with seconds left on the clock shortly after superb scrambling defence had held up Scott Murrell.

The final try with an extra man advantage came just as Beharrell was set to return, Stephenson forcing his way over from two metres out.

With the damage already done, the home side continued to turn the screw and keep the scoreboard ticking over.

On the back of a penalty, Keighley would again pressure the Hunslet line.

Junior Sa’u would make the most of a pass from Dane Chisholm, turning through an attempted tackle to ground the ball in front of a jubilant South Stand.

A penalty for a high tackle again saw the Cougars set up camp near to the Hunslet end.

They would again turn pressure into points on the edges, Charlie Graham powering through an attempted tackle to dive home.

Ill-discipline and poor edges defence continued to cause issues for the visitors with coach Alan Kilshaw looking more visibly angry as he served the final game of his touchline ban.

Hunslet would be penalised for offside on their own try line, and again the Cougars got themselves over as Stephenson dove home in the corner to complete his hat-trick.

The visitors would hold out from a Dane Chisholm 40/20 and managed to get two consolation tries shortly after.

Lewis Young would head the ball forward, resulting in a scrum, and from the ruck the visitors shifted left and created an overlap to allow Macauley Hallett a walk-in near to the corner against his former employers.

With the job done, it appeared as if Rhys Lovegrove’s charges had shut up shop for the afternoon.

Jordan Paga made the most of that sloppiness by burrowing his way over from dummy half despite a last-ditch tackle attempt at the line by Billy Gaylor.

As they always tend to do in meetings between these two sides, tensions would boil over beneath the blistering West Yorkshire sun.

Chisholm would come in at third man in the tackle and make contact with Paga’s head leading to the two sets of players coming together. The referee ended the half-back’s afternoon with a yellow card.

But James Feather rolled back the years to put the icing on the cake, going 40 metres from dummy half with a superb solo effort.