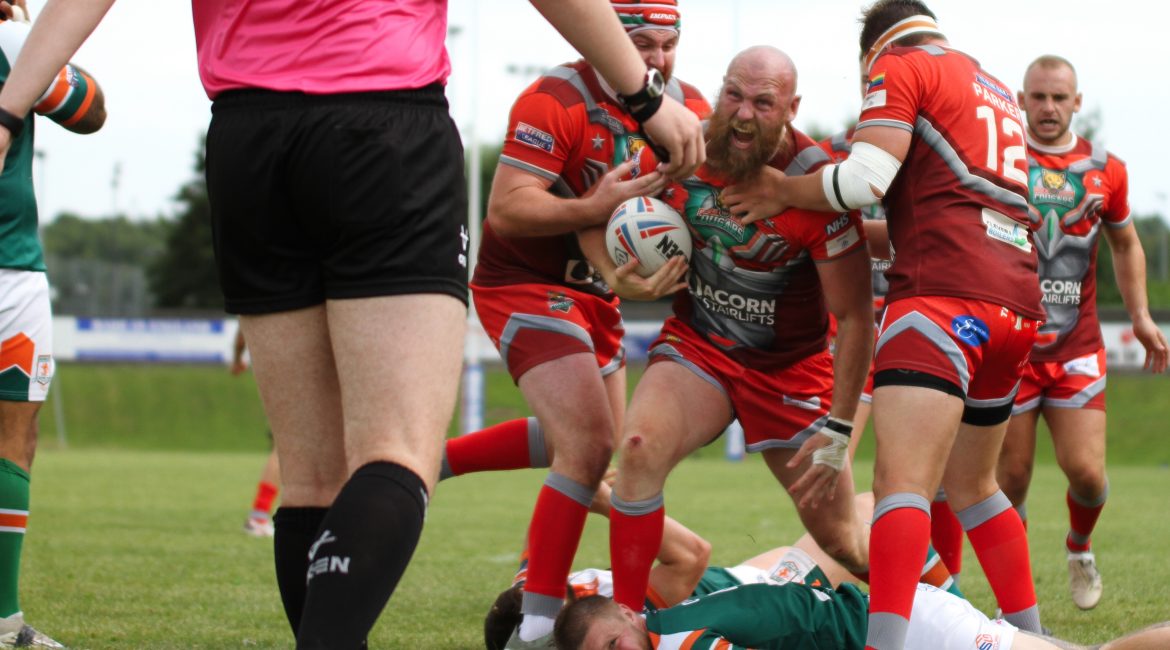 KEIGHLEY Cougars recorded a first point on the road this season as a late comeback saw them salvage a 20-20 draw in the West Yorkshire derby against Hunslet.

Trailing by ten points heading into the final eight minutes of the game, two late tries resulted in the Cougars managing to end their losing streak away from Cougar Park.

Played in front a healthy crowd for the first time since the easing of Covid restrictions that created a cauldron of atmosphere, Keighley began the brightest of the two sides.

However, the first opportunity of the afternoon went the way of the home side as Alex Brown looked to dive over in the corner only to be knocked into touch by his opposite number Mo Agoro.

From the twenty-metre restart that followed, Jack Miller broke the oppositions defensive line and managed to get an offload away under pressure to the supporting Dan Parker who would round the full back to touch down behind the uprights.

The game then would have a little bit of spice added to it as Brown would take Taylor Prell out on the line with a high tackle, the Cougars centre returning the favour with a tussle on the ground that saw all players from both sides rush in.

With a narrow early lead on the scoreboard, the visitors looked to turn the screw but were kept at bay by staunch home defence.

However, they would increase their lead in the 26th minute as Taylor Prell fought through a tackle to get to the line after great work by Aaron Levy to get an offload out of the tackle on the last.

Hunslet would then introduce Jordan Andrade from the interchanges bench and the prop would single handily turn the game on its head.

On the back of a knock-on from the restart, the Jamaica international would touch down after powering through an attempted tackle before turning his man on the line to ground the ball.

Minutes later, despite losing his shorts in the process, he would again run onto a ball close to the line and power over, this time crashing over beneath the crossbar to give his side a two-point lead at the break.

Keighley though must have wondered how they didn’t have the lead as shortly before the hooter sounded, Spencer Darley broke but was tackled just a metre short of the line.

Hunslet would be the better side for large parts of the second half as they came firing out the blocks at the restart.

They would extend their lead further after Vila Halafihi burrowed over from dummy half on the back of a penalty for stripping the ball against Kieran Moran.

Reece Chapman-Smith then thought he had a try from a Dave Gibbons kick, but the officials deemed he was in an offside position and disallowed the effort.

Ill discipline from the visitors presented Hunslet with two penalty conversion opportunities, through a swinging arm and interference, Jy-Mel Coleman converting on both occasions to move the Parksiders into a ten-point lead heading into the closing stages of the contest.

However, a sensational final eight minutes saw Rhys Lovegrove’s side comeback to leave with a share of the spoils.

Aaron Levy was held up but from the play that followed, Charlie Graham’s grubber kick would bounce off a Hunslet defender and allow the centre to touch the ball down in the corner.

Trailing by six points, the Cougars would keep the ball alive, and Scott Murrell’s short ball would send Dalton Desmond-Walker racing through to touch down and send the healthy visiting support into raptures.