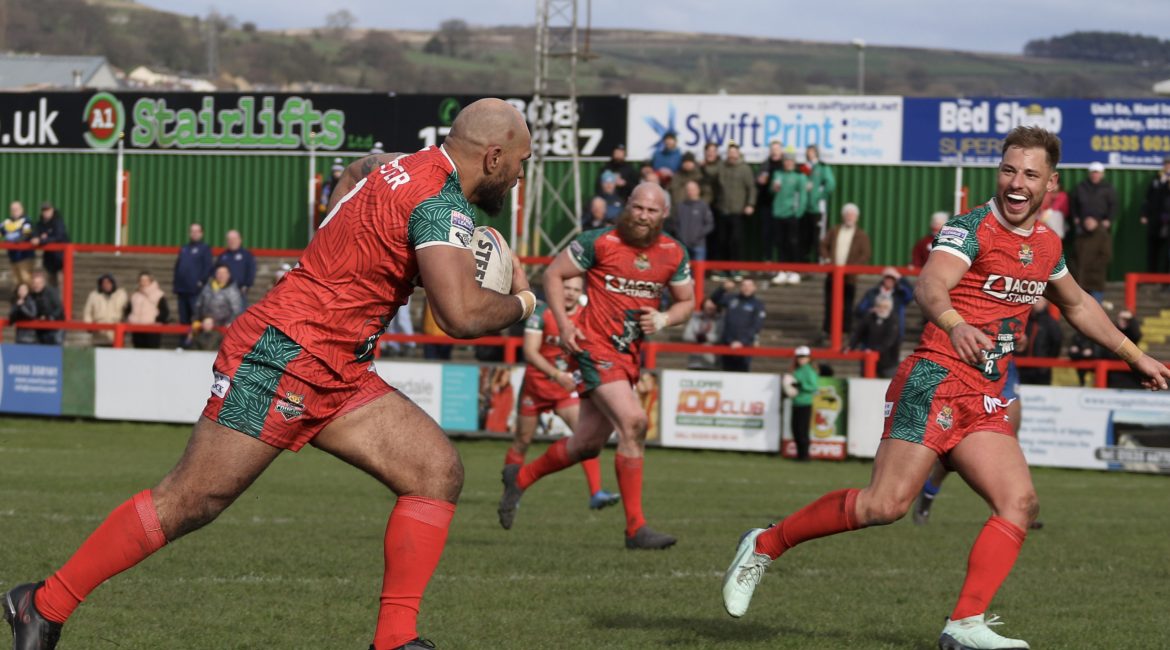 KEIGHLEY Cougars made sure they would go into their bye week with a 100% record as they grinded out a hard-fought home victory over Doncaster.

The game, the first meeting between the two since the Dons dramatic play-off victory last October, was a real war of attrition as the two sides defences were on show throughout the encounter before Keighley pulled away in the games closing stages.

After an even start to proceedings, a moment of genius from Jack Miller opened the scoring as the Cougars captain stepped through the line and fed the ball left where Alix Stephenson was on hand to touch down in the corner.

Jake Webster had the opportunity to extend his sides early advantage but knocked-on under pressure as he went to ground the ball.

Doncaster had a chance to get onto the scoreboard as Jason Tali rampaged to the line but a superb last-ditch tackle by James Feather, making his 350th appearance for the club, held out the centre.

Keighley then had a sustained period of pressure on the Dons line, but the visitors would hold up their opposition on no fewer than four occasions.

The ten-metre restart that followed the last of those hold-ups would see the Cougars extend their lead shortly before the interval.

The ball was again worked to the left edge where Charlie Graham showed great determination to turn his way through an attempted tackle and force himself over the line for his first try of the season.

The second half continued in a similar vain to the first as both sides attacks floundered under immense defensive pressure.

And again, it was moment of individual brilliance from Miller that would get Keighley over the line.

The half-back would exploit the blindside from ten metres out and feed Lewis Young through the gap in the defensive line, the full-back rounding the uprights to touch down beneath the crossbar.

Webster then thought he was going in at the corner for a further score, but the touch judge ruled he had been dragged into touch when the ball appeared to have been stripped in the tackle.

The sides would then exchange tries in quick succession.

After the Dons were penalised for offside near to their own line, Miller and Scott Murrell would link up and send the ball right to Nathan Roebuck. The centre diving over in the corner despite the best efforts of Jason Tali to knock him into touch.

A short kick-off though would work in Doncaster’s favour as they regained possession.

From there, they worked their way up the field to the Keighley line where Ben Johnston would scoot over from dummy half to finally break the Cougars defensive resilience.

The score restored some confidence in the Dons attack, and they tried to create something to get themselves back in the game but were again met with a sea of red shirts as Keighley continued to impress in defence.

The Cougars though would finish with a flourish to keep up their 100% start to the new league campaign.

Mo Agoro would cut inside from the right wing and break through the tiring Doncaster side but was halted by scrambling defence.

From the resulting break of tackle, he flicked out the back into the path of Webster who rounded the posts to score his first of the season.

The game would then have the curtain brought down with a memorable moment.

With the conversion being in front of the uprights, Miller gave the tee to Feather who would mark his landmark day with an historic first ever conversion for the club.