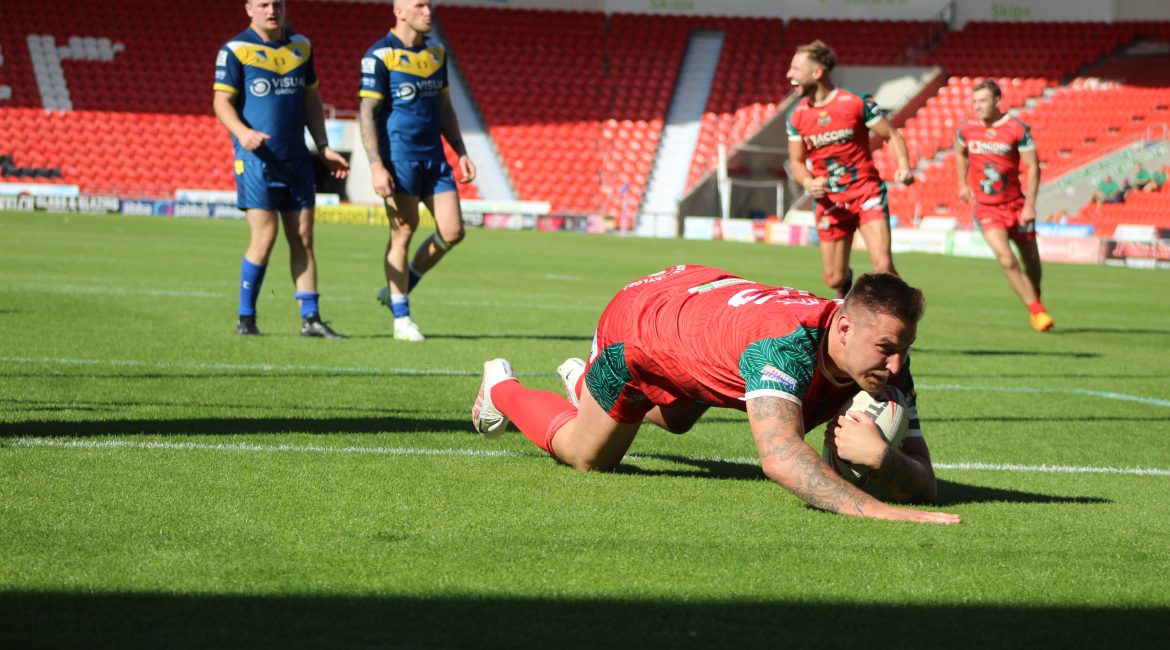 KEIGHLEY Cougars secured promotion and the League 1 title with a hard-fought victory away at play-off contenders Doncaster.

The division’s two in-form sides put on a spectacle expected of them in the South Yorkshire sun, with an 18th victory of the season ending the Cougars eight-year absence from the second tier.

And in front of a healthy crowd basking in glorious South Yorkshire sunshine, it is an afternoon that will live long in the memory of anyone associated with the Keighley club.

The visibly emotional Mike Smith and Mick O’Neill in the stands were a clear sign of what it means to the club but also the next step in the sensational turnaround since they returned to a makeshift side training on Silsden Park in January 2019.

Doncaster had the better of the afternoon’s opening exchange and would have opened the scoring through Tom Halliday if not for a superb last gasp intercept from Alix Stephenson on his own line.

It would be the visitors though who found the first points, Scott Murrell taking the ball to the line on the last to free up Lewis Young, the full-back in turn offloading out the tackle to allow Junior Sa’u to touch down. Jack Miller converting.

Miller would be the scorer of the next try, diving home from close range after offering support on the inside to Young as he again opened up the Doncaster defence.

The home side tried to find a way back into the arm wrestle, but a no-look pass out wide to Travis Corion near to the line would go behind the winger and into touch.

From the restart, Keighley worked their way down the park and earned a six again near to the Dons line.

And they made it fully count as Brenden Santi powered over from close range for his first try of the season.

Sa’u would try to burrow his way over for Keighley but would be held up and have his afternoon ended due to a head injury.

However, on the sound of the hooter, Doncaster would knock-on ten metres out from the line and Young picked up the loose ball and raced 90 metres to dive over.

The second half got off to a nightmare start for the visitors as they lost Mo Agoro to a head injury, the division’s top try scorer not returning to the field.

Immediately afterwards, two penalties moved the home side down the field, from which an overlap was created to send Tom Halliday over.

However, any threat of a comeback was quickly thwarted.

Charlie Graham first showed great positional awareness whilst in the air, to turn in landing and touch down under immense pressure after a kick to the corner from Dane Chisholm.

Moments afterwards, on the back of yet another break from Young, Toby Everett would break through a tackle to score to the left of the posts.

The Dons wouldn’t go down without a fight, finding a second through Robbie Storey, the centre burrowing over from close range.

Graham would have his second though as he finished off a lovely intercept and break from Chisholm.

Misi Taulapapa showed great awareness to score on the back of a penalty after Doncaster had worked their way near to the Keighley line.

The Dons would again push to find another try and reduce the deficit but were thwarted by Matthew Bailey. The prop sin-binned for a professional foul.

But on the sound of the final hooter, Aaron Levy went through a gap to wrap up the title sparking wild and jubilant scenes amongst the travelling Cougars faithful.