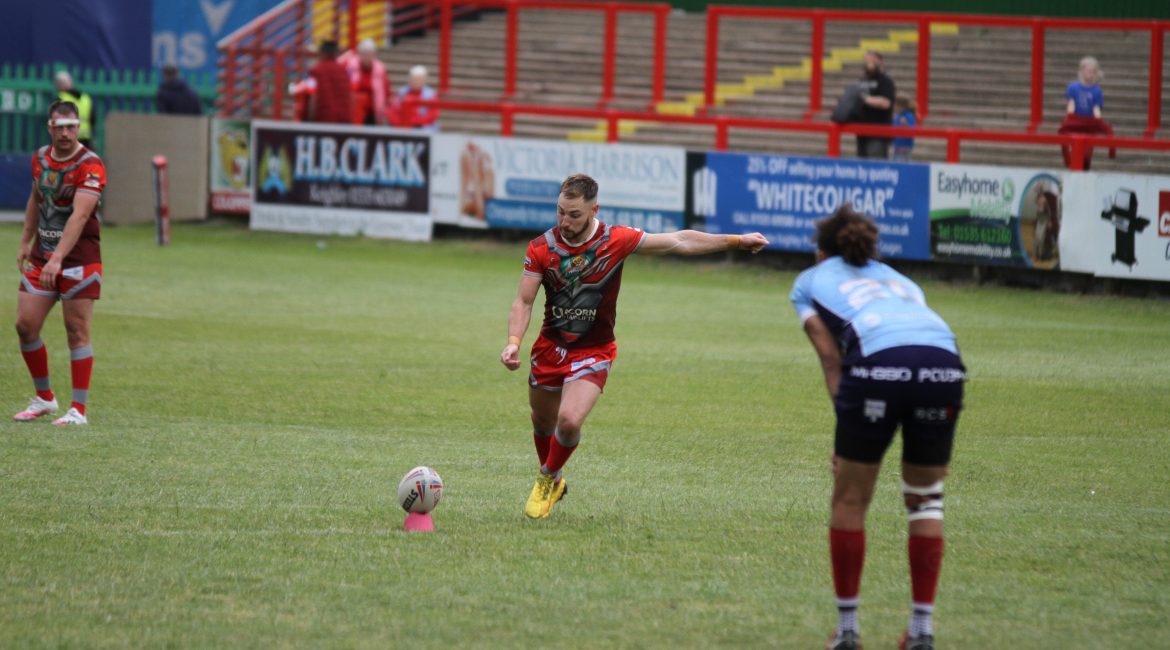 KEIGHLEY Cougars away day blues continued as they fell to a 7th consecutive loss on the road at the hands of the North Wales Crusaders.

In what would turn out to be an enthralling afternoon of Rugby League for the neutral as the pendulum would swing both ways throughout.

But a combination of both a poor start and finish to the game would cost the Cougars in front of a healthy crowd in Colwyn Bay.

It appeared that a long afternoon was on the cards as the home side raced into a 26-0 lead within the first quarter of the game.

The scoring was opened through Brad Billsborough, the German international touching down on the back of his own grubber after the kick chased forced an error from Phoenix Laulu-Togaga’e.

From the restart, Matt Reid broke the Cougars line and offloaded under pressure to the supporting Gav Rodden who crashed his way over the line.

With the Crusaders firmly on the front foot, the referee gave six again and on the first tackle Rodden offloaded out the tackle to Tommy Johnson who stepped through a gap in the defensive line to touch down.

The Cougars were rattled and after a penalty was given for laying on, the Crusaders made the most of the field advantage given to them as Reid offloaded across the top to Rob Massam, the winger diving over in the corner.

Rhys Lovegrove must have then felt that if his side didn’t have bad luck, they wouldn’t have any luck at all, as a grubber kick from Johnson bounced off a Keighley man into his hands and he would score his second try of the contest.

As the weather changed so did the momentum and the Cougars would stage a sensational comeback either side of half-time.

After coming close through Taylor Prell, the visitors got onto the scoreboard through Charlie Graham as he dived over after some clever work from Quentin Laulu-Togaga’e.

Aaron Levy then scored on the brink of the interval as he was the quickest to react to a grubber kick from Prell.

Settled back into the game after the break, a moment of genius from Scott Murrell would present Levy with his second four pointer of the game.

Murrell, on his 400th career appearance, put a chip over the top on the last and would be the fastest to his own kick before offloading the ball out wide to his back rower.

The half back then turned from provider to scorer as he again used his Rugby League brain to perfection as he shot out from dummy half and ducked through a tackle to force his way over from 10 metres out.

And Keighley would then sensationally take the lead in the 55th minute as the ball was kept alive and Ryan Wright offloaded to Brenden Santi, who powered over for his tenth try of the campaign.

With the game completely turned on its head, both sides would look to get on the front foot.

However, North Wales would again take the lead on the back of two penalty conversions from Johnson after the referee penalised the Cougars in quick succession.

After a penalty for offside levelled the scoreboard, a further penalty for obstruction from the resulting restart would give the Crusaders a narrow lead heading into the game’s final five minutes.

Tiring Keighley bodies would be punished however, as with two minutes left on the clock the home side created a numbers advantage on the overlap from which Patrick Ah Van touched down to make sure the victory would go to North Wales.