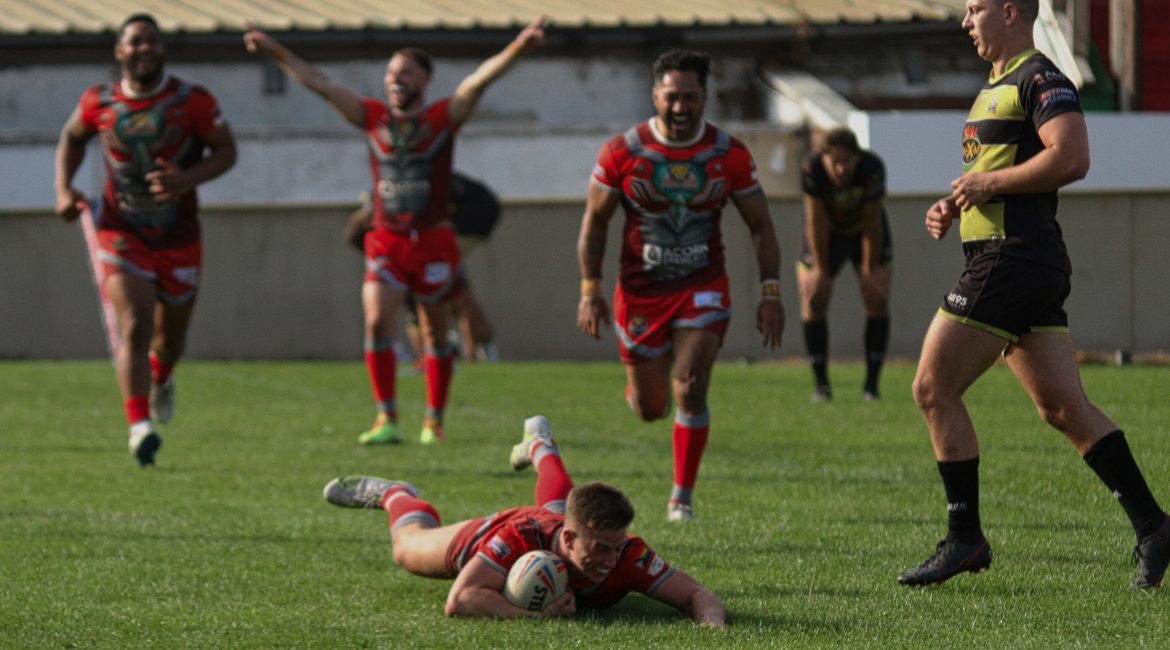 On the club’s family fun day, the biggest crowd of the season of 1327 packed into the ground to see Rhys Lovegrove’s side secure their place in the League One play-offs.

And on the day the club unveiled the Captain Sir Tom Moore gates, they showed the spirit instilled into the country by Sir Tom last year.

In truth, the first half was a closely fought contest with the first ten minutes of the game leaving a lot to be desired prior to the improvement that followed from both sides.

The only real scoring chance of the game’s early proceedings saw the Crusaders surrender a four pointer as Gav Rodden was penalised for crossing near to the line.

Keighley’s first opportunity came through Con Mika as the forward marauded to the line to be held short by valiant North Wales defence.

Warren Thompson would step through a gap with line wide open, but he was denied touching down for the visitors as a result of an outstanding last-ditch tackle from Mika.

With completion rates and errors low, openings were few and far between as shown by Taylor Prell touching down in the corner, but his effort was disallowed as Rob Massam managed to take a foot into touch.

From the restart, the visitors broke the line and found the precious opening score as Rob Massam created a two-on-one advantage and offloaded to the supporting Gav Rodden to race over the line. Tommy Johnson adding the extras.

The Crusaders would extend their lead further shortly after the half hour mark however as Johnson took the two points on offer after the home side were penalised near to their own line for offside.

Despite being on the back front, the Cougars would score before the interval as Scott Murrell marked his birthday with a sublime chip over the top that he raced onto and bundled over to make sure his side were in the game.

The second half though would begin with ill-discipline from the hosts, and they were punished accordingly as following consecutive penalties, Brad Brennan powered through to turn and score.

And it would be the ill-discipline of the visitors that allowed Keighley back into the contest.

On the back of a late shot on Scott Murrell, the home side opted to take the tap and it allowed Jake Webster the opportunity to force his way over from close range.

The Webster try sparked life back into the Cougars and they began to roll their opposition up the slope and took the lead, and subsequent hold, through two quickfire tries.

Jack Miller opted to kick early, and a wicked bounce of the ball forced a howler from Johnson as he allowed the ball to go past him and the onrushing Prell was quickest to react and touch down.

The boot of Murrell would next cause problems for the Crusaders, as the deflection of Matt Reid would see a set restart and Quentin Laulu-Togaga’e exposed a gap to find a way over.

Now on a roll, they didn’t take the foot of the pedal and blew the roof of Cougar Park as Alix Stephenson scored his first try for the club, stepping inside off the wing and leaving three men in his wake.

And the home side put the icing on the cake as Dan Parker crossed in the game’s final minute, exposing a tired North Wales defence to dive over after Prell was denied once again by Massam.