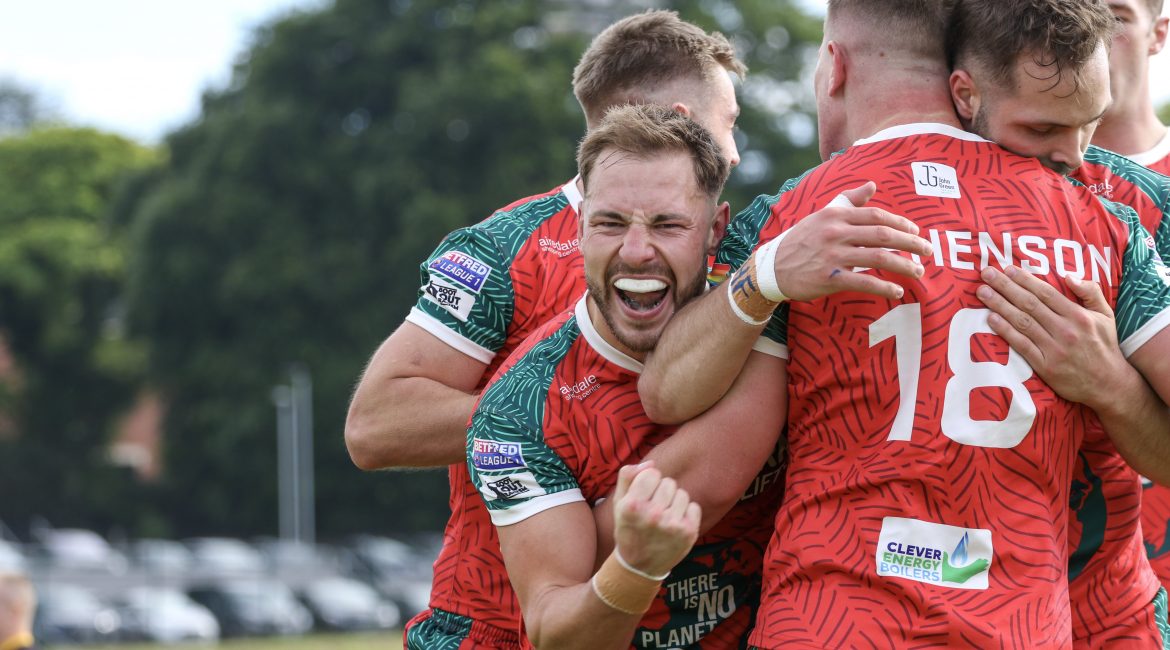 KEIGHLEY Cougars maintained their unbeaten start to the new season in comprehensive fashion as they blew promotion rivals North Wales Crusaders away with a scintillating performance.

Running in 11 tries in front of a 300 strong travelling support across the border, Rhys Lovegrove’s side laid down a marker as the halfway stage of the season approaches.

The visitors got off to a blistering start, scoring three tries in the game’s opening quarter of an hour.

Jake Webster, on his return from injury, opened the scoring as he reacted quickest to a Dane Chisholm grubber in-goal.

Superb defence forced a turnover, from which the Cougars went the length of the field to allow Aaron Levy to step through a tackle and cross the line.

The red sea kept coming towards the home side, and after the official awarded a six again the ball was sent to the left edge and Charlie Graham took advantage of a missed tackle to score.

Crusaders got onto the scoreboard, a long ball over the top avoided the fingertips of Nathan Roebuck and Rob Massam crashed over in the corner.

This would prove to only be a temporary blip, as the Crusaders again tried a long ball over the top but only for Alix Stephenson to pluck the ball out of the air and race 90 metres to the corner.

North Wales were in a state of shock, and the Cougars took advantage to score another two tries before the half-time interval.

Jack Miller would keep the ball alive on the last tackle after some clever play from Chisholm, and the ball was worked across the right edge to Mo Agoro, the winger diving in at the corner for his 14th try of the season.

And as the hooter sounded, Webster stepped through a tackle before taking two defenders over the line with him to seal his brace.

Keighley started the second half in a similar vein, keeping the scoreboard ticking over regularly.

Forcing a scrum near to the hosts line, Chisholm would break an attempted tackle to get his first try in red, white, and green.

Winning a penalty from the restart, the visitors again turned the screw and Levy would benefit by taking advantage of scrambling defence to score his second of the evening.

Chisholm then turned on his trademark style, cutting inside from near the wing to weave and step his way through the North Wales defence to race over.

The Crusaders would score their second try of the game for brief rest bite, Matt Reid forcing his way over from close range.

But the home side’s evening would worsen as Brad Billsborough was sin-binned for a professional foul after interfering in the ruck to prevent a quick play the ball.

A moment of pure genius would follow just two minutes into that ten-minute period.

Chisholm again showed his individual brilliance by exploiting a high line and putting a perfectly weighted kick over the top for Lewis Young to race through and touch down.

The onslaught continued, with the visitors final score of the evening coming straight from the restart.

Stephenson again broke down the left wing, and with Massam set to make the tackle a pass inside to the supporting Levy sent the forward racing round the uprights for his first professional hat-trick.

Massam would again force his way over in the corner in the games closing stages, put this would be nothing more than a mere consolation on the evening.

The sound of the final hooter brought with it a thunderous roar from the travelling fans and cement Keighley’s league position.