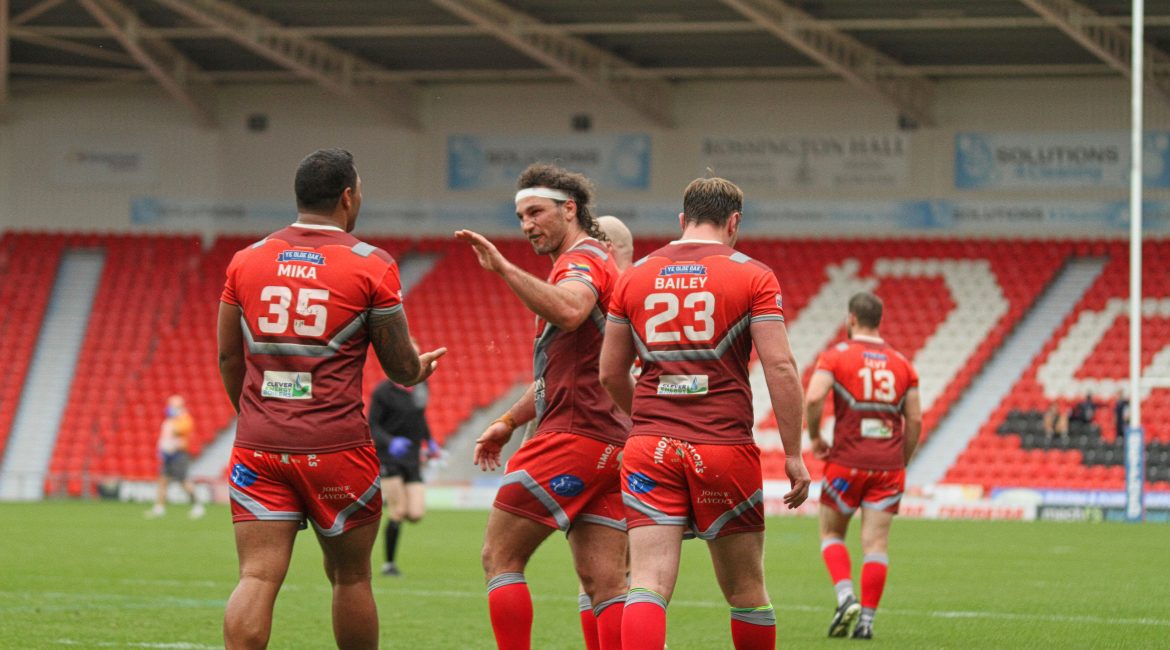 KEIGHLEY Cougars began their first play-off campaign in six years with a late salvo to defeat the North Wales Crusaders in Colwyn Bay.

After a dominating first half performance, it appeared that Rhys Lovegrove’s side were going to let the win slip out of their grasps early into the second forty.

However, the re-introduction of Brenden Santi from the interchanges bench saw the forward score a brace of tries to seal victory and a trip to Workington to play for a place in the Betfred League 1 promotion final.

North Wales had the better of the early exchanges but could not find a way through as a tenacious Keighly defence was led from the line by captain Kyle Kesik, the hooker tackling anything that moved in yellow and black.

And their efforts in defence were rewarded by the games opening score as Jake Webster burrowed his way over from close range after Scott Murrell was stopped short of the line.

Brad Brennan nearly found a way through to level the scores, but the visitors went the length of the field and Jack Miller won the foot race as he touched down with his fingertips on the back of an outstanding grubber from Murrell.

The boot of Miller would then extend the lead further, the division’s top points scorer adding another two to his tally after the home side were penalised in attack for pushing Billy Gaylor away from square marker by the face.

However, the tide would turn shortly before half-time as a cruel deflection of the post protector allowed Brad Billsborough to touch down his own kick on the last to get the Crusaders onto the scoreboard.

The second half began with five minutes of madness from Jack Arnold, the Keighley prop sin-binned for a crusher tackle with North Wales taking full advantage of being a man up for ten minutes to level the game.

Tommy Johnson opted to take the two following the incident that resulted in Arnold being sent from the field, but they made the most of the numbers advantage from the next set, sending Pat Ah Van racing in at the corner.

With momentum on their side, the Crusaders had an opportunity to take the lead, but Matt Reid was denied by an outstanding last-ditch clearance for a dropout by Taylor Prell.

Then with the playing field back level at 13-a-side once more, Lovegrove made the decision to bring Santi back onto the field and the return of the Italy captain would see the Cougars storm to victory.

They retook the lead through the boot of Miller, the half-back opting to take the two points presented to him after the official penalised the hosts for offside 20 metres out from the line.

Nerves were apparent both on and off the field as a raucous atmosphere continued to fill the night sky at the Stadwim Zip World.

But it would be the visitors who continued to push on and seal the all-important victory.

After forcing a dropout on the back of a kick in goal by Murrell, the resulting set saw Keighley push forward to the line and from there Santi forced his way over to create breathing space between the two sides.

And then with four minutes left, the prop would score his second try of the evening as he strolled over on the back off a superb inside ball that was created through some outstanding link-up play between Murrell and Webster.

The sound of the final hooter was greeted with a roar from the healthy travelling support and scenes of celebration from the players.