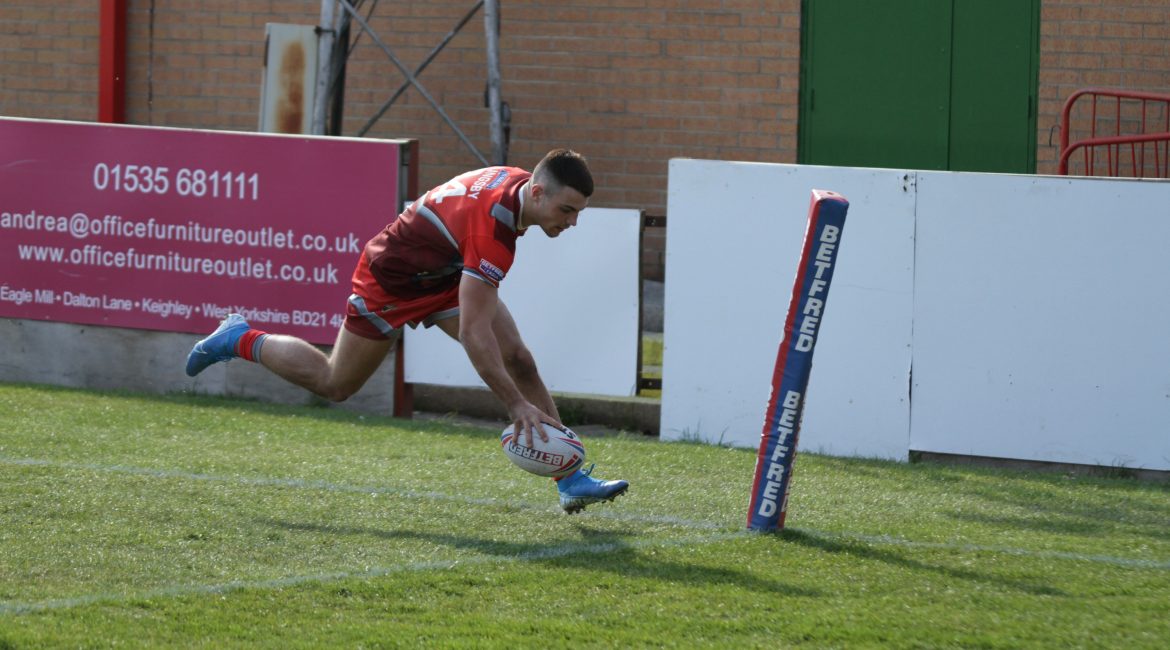 KEIGHLEY Cougars put themselves in good stead heading into the new League One season with a near complete performance against the Coventry Bears.

Five tries in the game’s opening 19 minutes set Rhys Lovegrove’s side onto victory, but the Bears would never roll over and remained competitive much to their credit.

Ill-discipline from the visitors allowed Keighley to camp on the Coventry line in the games early stages and they took full advantage of the field position given to them.

Keighley opened the scoring in the 4th minute when Scott Murrell sold a dummy pass to send Ben Stead through the gap to cross from close range against his former club.

The resulting restart saw consecutive penalties allow the Cougars to work their way down the park and score once more as Brenden Santi crashed through a gap in the defensive line.

The early onslaught wouldn’t stop there, Mo Agoro scored the first of an eventual brace after he was the beneficiary of a series of passes between Murrell and Stead to create space on the wing for the Jamaica international.

Jack Miller would be the next to add his name to the scoresheet, opening space for himself with a shimmy before racing to the line despite the interests of the Coventry full-back.

Agoro then had his second in the 19th minute, diving home in the corner after Jake Webster wriggled out of an attempted tackle to get an offload away.

The only serious attack throughout the entire first half from Coventry would nearly produce a try but Hayden Freeman knocked on an offload from Matt Welham with the line at his mercy.

The Bears continued to settle, but Keighley still helped themselves to another two tries before the interval.

Alfie Seeley touching down in the corner shortly before Webster broke a tackle and managed to squeeze himself over to touch down.

Coventry started the second-half the better side but still conceded a further score as Miller made the most of a numbers advantage to round the defender to score a second of the afternoon.

Referee Nick Bennett then placed an incident on report after Jack Arnold made an allegation of misdemeanours in a tackle against Bradley Ho, jumping up furiously out of the tackle after the initial contact.

It wouldn’t be the last time that Arnold would be in discussion with the referee after a late challenge on Ho would result in the prop being sent to the sinbin with the Bears forward being stretchered from the field after a lengthy delay.

Despite losing Ho to a serious look neck injury, later confirmed by medical staff as stinger, Coventry’s hard work in the second half would be rewarded.

Peter Ryan broke through a tackle which allowed the Bears to create a numbers advantage on the right edge, Reece Rance would take advantage by sidestepping Josh Slingsby before then racing to the line unchallenged to score.

Slingsby, a product of local community club Keighley Albion, would more than make amends however as he scored a late brace to put some flattery on the scoreboard for Lovegrove’s men.

His first try would be a walk in at the corner after Rance shot out of the line and allowed Charlie Graham to get the offload away.

Dan Parker then thought his own impressive performance would be capped off with a try, but the officials pulled play back for a Cougars turnover after a double knock-on.

From the play the ball just before the hooter, Slingsby would score his second on the back of great link up play from Parker, Miller, and Stead.