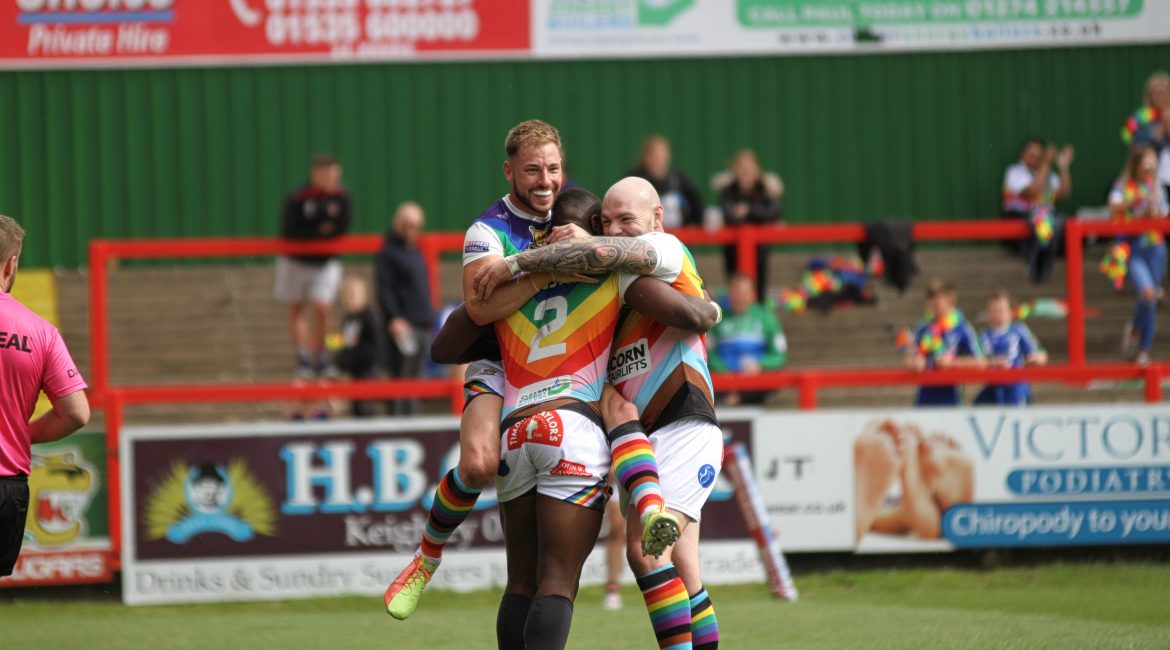 KEIGHLEY Cougars avenged last month’s defeat at the hands of the Coventry Bears with a victory of their own at Cougar Park.

On what was the club’s second annual pride day, a party atmosphere built throughout the day with those supporting a Cougars side wearing a special one-off kit designed to promote equality, diversity, and inclusion who left with the biggest smiles.

And the home side got off to a dream start, crossing twice inside the game’s opening five minutes to really add to the occasion for the 1,028 supporters in attendance at Cougar Park.

With just 28 seconds on the clock, Charlie Graham broke through the Bears line and fought off a would-be tackler to crash his way over after the Cougars won the ball back from kick-off.

The visitors then put the restart out on the full, and from the resulting penalty, Jack Miller put a grubber kick in behind the defensive line on the last and Dan Parker raced through to pick the ball up and round the full-back.

The onslaught continued, Mo Agoro forcing his way over in the corner on the back of an outrageous offload out of the back from Taylor Prell that caught everyone in Cougar Park bar his winger cold.

With not even 15 minutes on the clock, the Cougars hit a four try lead as Parker powered his way over from close range for his second of the afternoon on the back of a penalty.

The quarter mark of the game did not bring any relief for Coventry as after a high tackle on Phoenix Laulu-Togaga’e, fresh off a move to Hull Kingston Rovers for 2022 this week, Agoro broke a tackle and raced 90 metres to score.

It wasn’t proving to the Bears afternoon, and it threatened to get worse as Liam Welham was placed on report by the officials following a complaint from Dalton Desmond-Walker for something that had happened in the tackle.

However, a wicked bounce from a high kick from Dave Scott would catch LT Junior cold and allow Hayden Freeman to take advantage and get the away side onto the scoreboard for some brief rest bite.

And brief it was, as Keighley went straight up the other end almost instantly and from a long ball over the top courtesy of Billy Gaylor, Agoro raced over for his hat-trick.

Miller, who had been provider on a couple of occasions, then got a try of his own as he fought his way over the line from close range shortly before half-time.

The Bears would have the final say of the half however, Dan Coates touching down after a chip from Reece Rance came back off the crossbar.

Coventry started the second half brightly, and Brad Clavering got the rewards as he powered over from close range.

The visitors carried on the front foot, but Dave Scott was thwarted as his tried to break down the right wing to score in the corner.

The second half was slow and lethargic, the sinbinning of Taylor Prell for retaliation a rare talking point as the game petered out.

Aaron Levy thought he had the Cougars first try of the half with five minutes remaining, but scrambling Bears defence prevented him touching down a Miller grubber.

The visitors defence again prevented the scoreboard being extended as they scrambled to hold Con Mika up over the line.

However, they would get the icing on the cake as Ryan Wright raced over the line despite being the victim of a Nathan Hill high tackle on route to scoring his first try of the season.