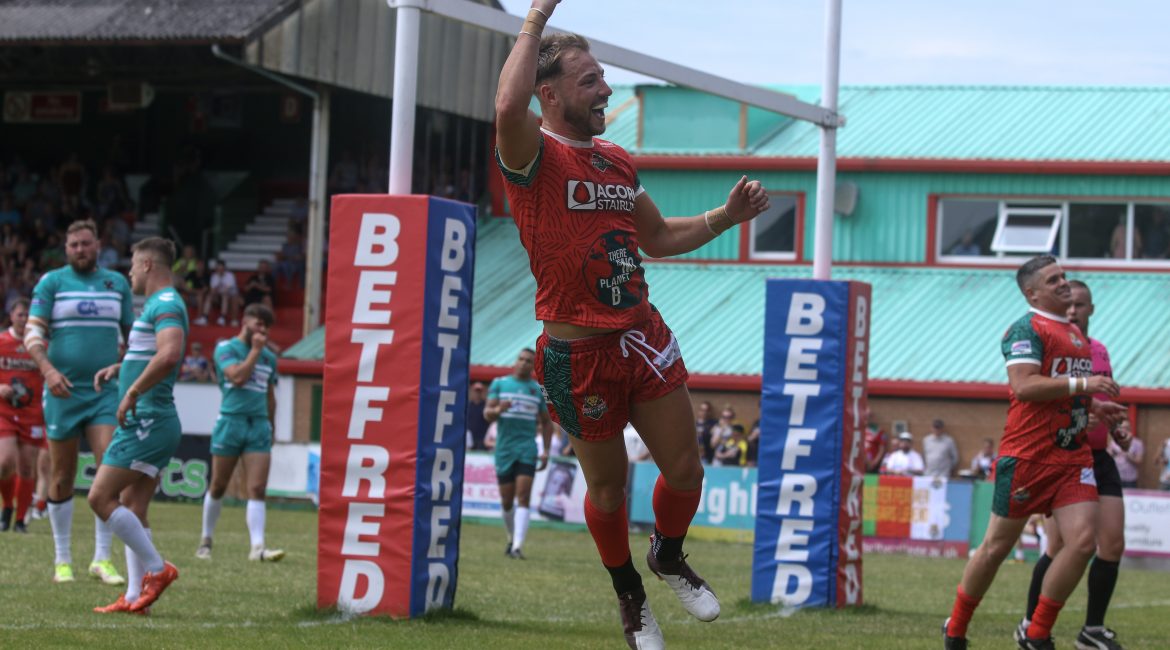 KEIGHLEY Cougars strengthened their grip on the League 1 leaders position with a comfortable home victory against a spirited Cornwall.

Scoring twelve tries on their way to a fourteenth consecutive victory, Rhys Lovegrove’s side also registered a fourth straight clean sheet, their sixth of the season, as they blew away the sport’s newest name.

The side from the Duchy made a bright start to the game but were held out by tenacious Cougars defence.

But once Junior Sa’u opened the scoring with an acrobatic dive in the corner after a long ball over the top from Jack Miller it was all one-way traffic.

Alix Stephenson marked his return to the side in style shortly after, stepping through a tackle to leave a Cornwall defender flat on his back allowing himself to race over next to the uprights.

The successful conversion from Miller saw the Keighley skipper register points for a 38th match in succession, a run that started back in February 2020.

Sa’u scored his second of the afternoon shortly after, walking the ball into the left corner after Lewis Young opened the defensive line from a scrum.

The red wave kept coming at the tiring visitors, and Charlie Graham took full advantage by walking the ball to the line courtesy of a short ball outside from Miller.

The record-breaking run of tries of Mo Agoro was extended to an eleventh straight game.

The Jamaican international winger returned a kick out of the backline with venom, breaking a tackle and racing 80 metres to blow the roof of Cougar Park after seeing off former Cougar Harry Aaronson.

Miller, who had been provider for the most part, then got himself onto the scoresheet as he stepped through a tackle and touched down much to his jubilation.

Cornwall were then reduced to 12 men with seconds of the half remaining, Tom Ashton sent to the bin for a use of the elbow as he looked to break down the Cougars right edge in attack.

Keighley made the most of that man advantage early on in the second half as Aaron Levy forced his way over from close range just three minutes after the restart.

Kyle Trout marked his debut with a try, crossing from close range after Young drew out two defenders to create the space.

And from the restart, the Cougars went the length off the field with Agoro weaving his way in at the corner after great work from Sa’u.

Cornwall then had a rare attack with Tom Ashton trying to break his way through near to the line but a superb ball steal from Kyle Kesik.

A dubious knock-on allowed the next Keighley score as they won the ball back near to the line and Dan Parker crashed his way over from a metre out.

Distressing scenes would follow as Sam Gilder came off worse after a big collision, the forward stretched from the field after a lengthy stoppage.

Thankfully Gilder was discharged from hospital later that evening with concussion following scans and checks.

The Cougars though still had time for two tries.

Agoro first scored his 25th try of the season as he dove home in the corner after great link-up play with Sa’u.

Cornwall would finish the game a man light after Myles Tate was shown a yellow card for a tip tackle on his first return to his former club.

Then on the sound of the hooter, Young would break through two tackle and race beneath the dot touch down.