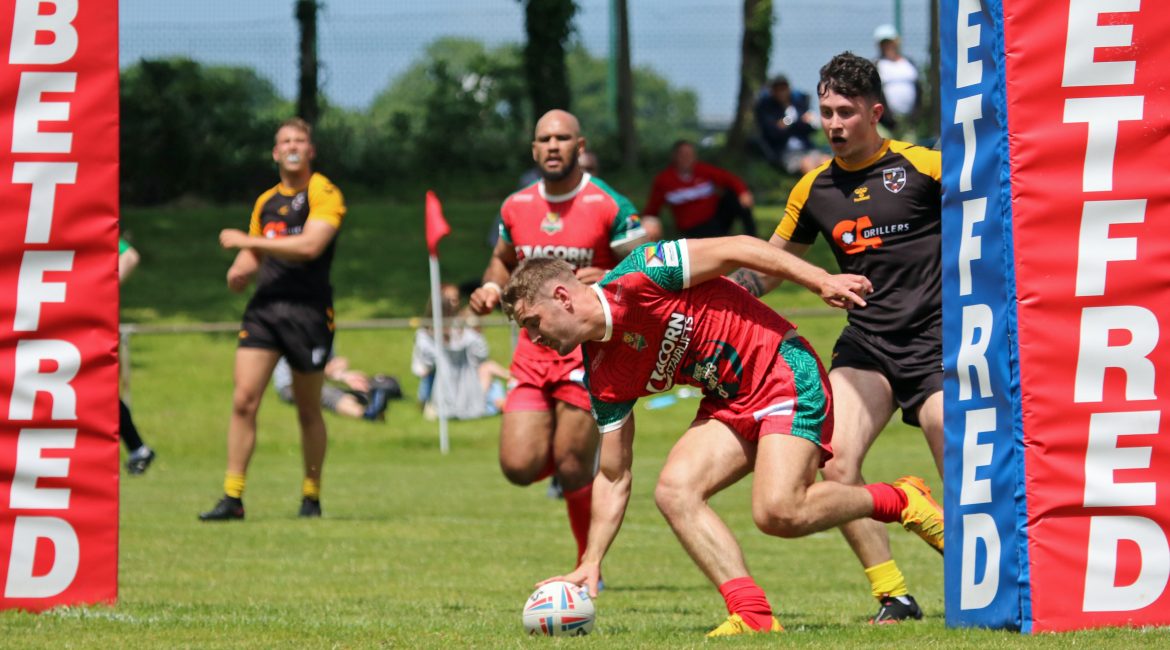 KEIGHLEY Cougars made it 10 wins from 10 as the season reached its halfway point with victory away at bottom of the league Cornwall.

The division’s bottom club put in a spirited display in the first ever meeting between the two clubs, but Rhys Lovegrove’s side responded to maintain their 100% record.

It appeared the long journey had taken its toll in the opening stages of the contest as the side got off to a slow start.

However, an early penalty for a high tackle allowed Dane Chisholm to find the first score.

The mercurial half-back stepped through two attempted tackles close to the line, diving over to the left of the uprights.

Cornwall grew into the game, but after Luke Collins was sin-binned for a late shot on Kyle Kesik, Keighley would turn the screw.

The resulting penalty would see the ball shifted wide, where Alix Stephenson was on hand to fight over in the corner.

This appeared to open the floodgates as from the restart, Josh Lynam drew in three defenders to the tackle allowing Lewis Young to step through the gap and race to dive over beneath the crossbar.

The home side kept coming and nearly got onto the scoreboard through Aaron Jones-Bishop, but the winger was taken into touch by Jake Webster.

The Cougars then extended their lead further as Charlie Graham was the quickest in a foot race to the line after Jack Miller put a chip over the top on the last tackle.

It was the ninth consecutive game in which Graham had scored a try, breaking Nick Pinkney’s 28-year-old club record.

Cornwall were then reduced to 12-men for the remainder of the game, Liam Whitton being dismissed for contact with the head of Aaron Levy after leading into the tackle with his elbow raised.

And ill-discipline allowed Keighley in again, Graham breaking a tackle and touching down for his second as the half-time hooter sounded from a penalty.

The man disadvantage galvanised the hosts, and they began the second half brightly with a try.

Former Keighley man Nathan Conroy’s grubber bounced back into his arms, and the half-back offloaded inside to the supporting Nathan Cullen, who in turn found the line for a try on his debut.

The game would ebb and flow for a period before Chisholm would again unluck the opposition defence, weaving through to find his way over for a second try.

The conversion that followed from Miller saw the captain register his 500th point for the club.

A break from Young minutes later would put Keighley in once again,

After the full-back lost his footing, the scrambling Cornwall defence wouldn’t get back in time and the ball was passed through numerous hands before Harvey Spence exploited a gap in the line to score his first try in Cougars colours.

The restart would go out on the full, and from the penalty on halfway, top try-scorer Mo Agoro raced home in the corner after Webster drew in the defender.

Alix Stephenson then somehow failed to score as he rounded the posts, but his blushes were spared as Keighley won the ball back immediately and Toby Everett crashed his way over for his first try for the club.

And with the Cornwall side now tiring, a third try in quick succession would follow from the restart as the Cougars went the length of the field, Agoro finding himself over in the corner once again for his 16th try of the season.

The final say though would go to Cornwall, Jones-Bishop racing to the line after taking advantage of a dropped ball.