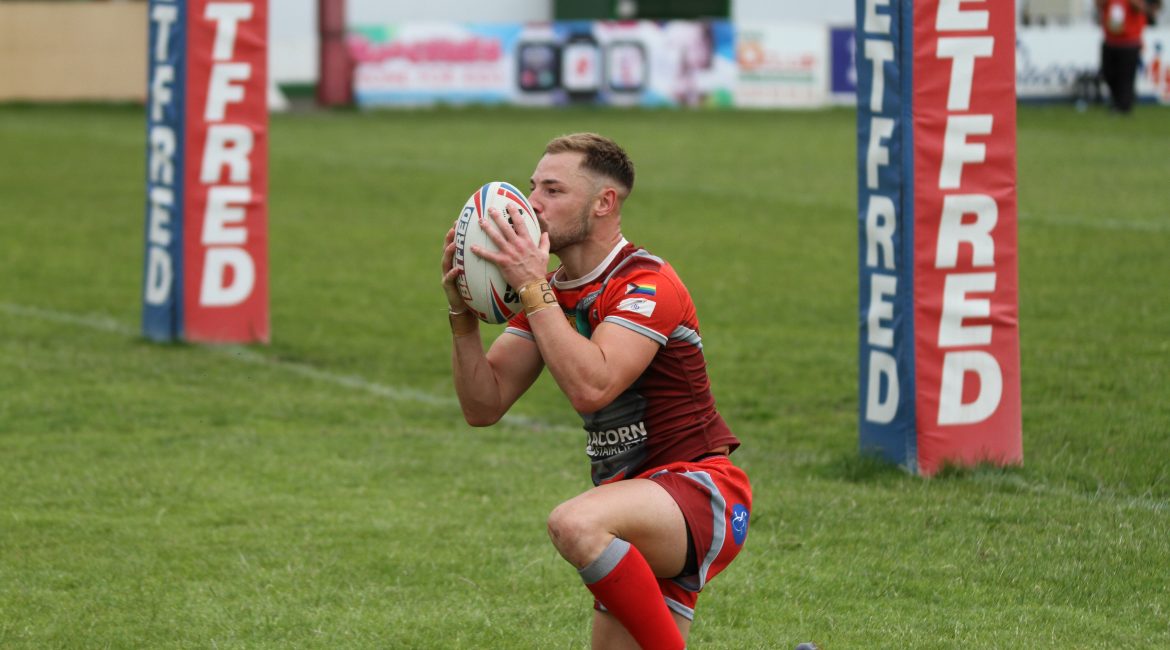 KEIGHLEY Cougars ended the Barrow Raiders undefeated start to the season with a sensational display in sizzling temperatures at Cougar Park.

It was the Cougars standout performance of the season to date as they bounced back from a difficult past month to pick apart the Betfred League One leaders in their final home game before a run of three consecutive away trips.

Ryan Johnston had the game’s first try scoring opportunity as he tried to skip through but a well-timed tackle from Dan Parker forced a knock-on with the line gaping.

However, it would the hosts who registered the first points from the boot of Jack Miller after the Raiders were penalised for obstruction on Taylor Prell.

The boot of Jamie Dallimore would level the scoreboard up as he also opted for two just moments later after the official pulled the home side for offside.

It was a war of attrition as temperatures continued to increase but the first try of the afternoon went the way of the Cougars.

On the back of consecutive dropouts, Miller stepped through the line and offloaded to the supporting Aaron Levy who dived over in front of an ecstatic Cougar Park kop.

Dallimore would then convert a further two points given to him after the half-back was taken late off the ball by the onrushing Brenden Santi.

Miller would put his boot to use once more after the opposition were pinged for offside close to their own line.

The home side would take breathing space back into the sheds at half-time as moments before the hooter sounded, Ryan Wright forced a line dropout.

From the resulting kick, the Cougars worked the ball across to the right edge where Mo Agoro dove home in the corner.

This put the bit between the Cougars teeth and the home side impressed throughout the entire second half as they blew Barrow off the park.

Superb defensive effort first kept the Raiders at bay as they held Callum Bustin up over the line.

And then on the back of a knock-on, Quentin Laulu-Togaga’e showed how vital experience can be in big games as he took the ball from dummy half and strolled across the face of the Barrow defensive line before exposing a gap and touching down beneath the crossbar.

Laulu-Togaga’e then turned provider as he stepped through a tackle, leaving Ryan Duffy behind in back play, before breaking the line and popping the ball out to the supporting Miller who went 30 metres to dive over.

Wright was then shown a yellow card for a late tackle on Dallimore, but despite being a man down the home defence continued to hold strong and scored a further two tries.

Adam Walne and Callum Bustin were both held up over the line before Charlie Graham intercepted a wayward pass from Dallimore to race the full length of Cougar Park to send the ground into raptures.

The onslaught from the home side would continue as after Graham earned a fresh set of six near to the Barrow line, the ball went into the hands of Brenden Santi, who in turn powered his way over to complete the Cougars rout and signal the end to the Raiders undefeated start to the 2021 season.

Barrow did score a consolation through Jarrad Stack, the centre powering his way over from close range on the back of a penalty for offside.

However, the Raiders afternoon would end under more of a cloud as Dallimore was put on report by the official for an alleged bite on Kieran Moran with 14 seconds left on the clock.