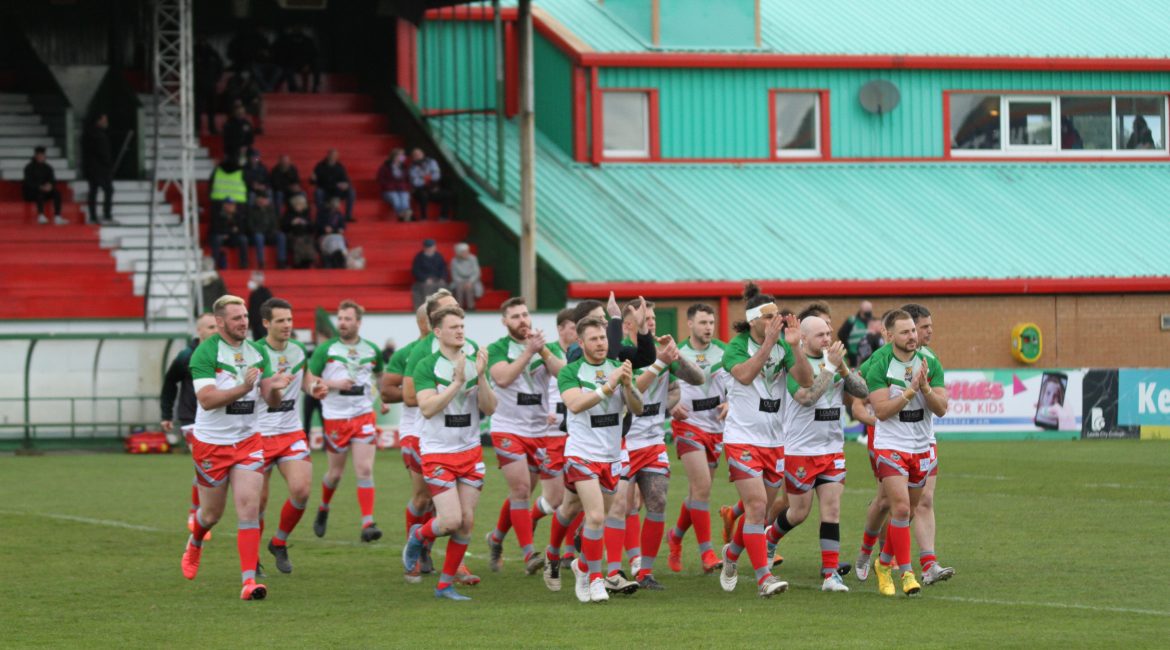 The Keighley Cougars away day woes continued as they were defeated 34-20 by Workington Town at Derwent Park.

The first half was a tight affair that swung back and forth as both sides exchanged the lead on the scoreboard throughout.

Josh Slingsby opened the scoring, but two quick fire Workington tries from Jake Moore and Brad Holroyd put the home side in front.

The Cougars would take the lead once again through two quick fire tries of their own as Brenden Santi powered over before Slingsby would score his second of the afternoon.

However, Town took the lead going into half-time as Rhys Clarke powered his way over from close range.

They extended that lead further as Holroyd sealed his brace, but Taylor Prell would score from the Cougars to move them within four points.

A combination of errors and penalties would take hold though and Workington scored two tries late in the game through Caine Barnes and Matty Henson to seal victory for Town.

An injury and suspension ravaged West Wales Raiders side did themselves proud in defeat, as they went down 10-60 at home to table topping Barrow.

Barrow ran in 11 tries in total with Tee Ritson the start of the show for the visitors as he crossed for a hat-trick of tries as well as converting three tries.

Nathan Mossop marked his return to his former club with a brace of tries himself whilst the other scores came through Connor Terrill, Danny Morrow, Ryan Duffy, Declan Hulme, Shane Toal, and Mark Tyson.

West Wales did have their moments throughout the contest and were rewarded with two consolation efforts.

Jamie Murphy would score both Raiders tries on the afternoon, one of which was a superb individual effort down the left wing in the corner.

The game however was also marred by an unsavoury incident that resulted in twins Ewan and Ieuan Badham being sin-binned for West Wales, with disciplinary handing out suspensions to the two as well as Barrow’s own brothers, Dan and Shane Toal.

Head Coach Rhys Lovegrove has made two changes to his squad from last weekend’s defeat to Workington.

Robert Matamosi, for the first time since March’s Challenge Cup tie in London, and Phoenix Laulu-Togaga’e, who has returned to the bubble following his exams, are both brought into the side by Lovegrove.

Alfie Seeley and Jack Arnold are the two players who miss out who drop out of the side.

Mo Agoro (Leg) and Scott Murrell (Hamstring) are both expected to play after being ruled out through injury late on in the week leading up to the Workington game.

West Wales Raiders Head Coach Aaron Wood is feeling the toll of an ever-growing injury and suspension list and is only able to name a 19-man squad for the long journey north to Cougar Park.

With as many as 16 players unavailable for selection, Mike Connor, Emosi Nadaubale and Alan Pope become the latest players to be put on the sidelines following last Saturday’s home defeat at the hands of the Barrow Raiders.

The Llanelli based outfit are able however to welcome Alex Hicken back into their side as they make the trip to West Yorkshire this weekend.

Twins Ewan and Ieuan Badham are both available for selection despite their respective charges from disciplinary yesterday, with their suspensions not starting until next weekend.

KEIGHLEY COUGARS HEAD COACH RHYS LOVEGROVE: “It’s a good opportunity for us to stick to our gameplan.

“They still have a really good forward pack, athletic outside backs, and Rangi Chase.

“They’ve got the potential to score points, but they’ve not got a lot of rugby league experience within the team.

“The only way to capitalise on that though is to stick to the process which allows us to play our footy, and to be ruthless.”

This is the first meeting between the sides since the historic Cougar Pride game in July 2019, an afternoon that saw the Cougars emerge 50-18 victors over their visitors.

The first half was a close encounter between the two sides, with stubborn Raiders defence thwarting a patient Keighley attack. This resulted in the Cougars only taking a 16-6 lead into the half-time break.

Macauley Hallett opened the scoring, but West Wales levelled through Mitch Shaw and the score remained that way until late in the half when tries from Will Cooke and Jack Miller gave the Cougars some breathing space.

Despite Hallett and two West Wales players being sin-binned early in the second half, the Cougars went into another gear and blew their resilient opponents of the park to seal a comfortable victory.

A Benn Hardcastle try was met with a Raiders response through Sam Baker, but two quick fire scores from Jamie Thackray and Miller would send Rhys Lovegrove’s side on their way.

Hardcastle would then cross for his second try of the afternoon, but the men from the Stebo wouldn’t go down without a fight and found another score through Morgan Evans.

Two late tries though would put gloss on the score for the Cougars as Miller completed his hat-trick with Jason Muranka following up with a try on the brink of the hooter sounding for full-time.

The Keighley Cougars Ladies side are in action this Sunday as they travel to the Leigh Miners Rangers in Round Five of the Women’s Championship season.

Fresh of their first win over the season against the Oulton Raidettes at Cougar Park last weekend, Dave Needham and his side will be looking to continue their momentum as they make the journey across the Pennines to Twist Lane.

The game takes place on Sunday afternoon and is a 2pm kick-off.