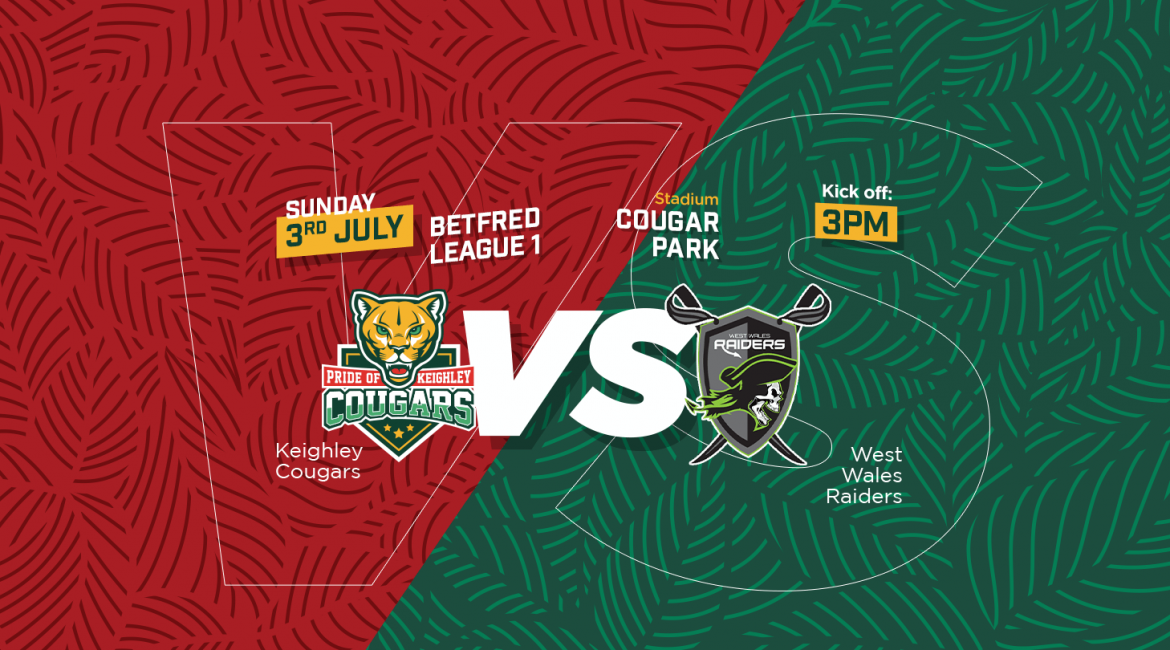 The Keighley Cougars maintained their 100% record in style, blowing Oldham off the park with a 62-0 home victory at Cougar Park.

Jack Miller opened the scoring with a try after just 29 seconds, and from there the side never looked back.

Four further first half tries would give the Cougars a 30-point advantage at the interval.

The right edge benefitted massively as both Jake Webster and Mo Agoro had walk-ins at the corner.

Miller scored a second on the back of a break from Lewis Young before Nathan Roebuck intercepted and raced 60 metres to score.

Despite losing Dane Chisholm to the sin-bin, Keighley would find another try as Junior Sa’u dived home in the corner.

Agoro then sealed his brace with Aaron Levy crashing over from close range shortly after.

Roebuck sealed his pair of tries from an outrageous bit of skill from Chisholm, before Dan Parker and James Feather wrapped up the win after Oldham were reduced to 11 men thanks to two sin-binnings in quick succession.

The West Wales Raiders returned to the foot of the division after succumbing to a 4-24 home loss to Cornwall.

An ill-disciplined performance, that saw three Raiders players put in the sin-bin throughout, saw the Raiders become the first side to record a loss to the sport’s newest club.

Aaronson would score a second shortly after with an acrobatic effort, with Lloyd Allen then sin-binned for a high tackle.

The visitors would have a further two tries disallowed before extending their lead as Liam Whitton burrowed over from dummy half.

Ben Jackson though would get the Raiders on the scoreboard shortly before the half-time interval.

Tom Morgan was the next West Wales man to be sent for ten, and Cornwall took advantage with a fourth try of the afternoon courtesy of Purcell.

Whitton would score the afternoon’s final points with the Raiders then again reduced to twelve as Ben Jones was binned for the use of an elbow.

Dalton Desmond-Walker and Josh Lynam (both Hand) returned to full training this week, but the visit of the Raiders comes too soon for the pair.

New signing Kyle Trout only trained with his teammates for the first time on Wednesday evening with Lovegrove opting against including his new season immediately.

Ewan Badham and Callum Mulkeen both return from suspension with Ryan Cane and Jonathan Hutton, who both joined the Raiders earlier this week, coming straight into the side for a potential debut.

Darrel Moyle, who recently returned from a loan spell at Torfaen Tigers, is also named with Louis O’Sullivan also returning to the squad.

KEIGHLEY COUGARS HEAD COACH RHYS LOVEGROVE: “The intensity was really good against Oldham and even though there were some details that went wrong, which we have worked on in training this week, our energy covered for those errors really well.

“There were a few errors with the ball, which will always happen when you introduce new players like we did last Sunday, but the team really understood how to front load that energy.

“A challenge we face from last week going into this week is can we keep that level of intensity and performance.

“We went into our reverse fixture against today’s opposition on the back of two consecutive clean sheets and a record victory, and I think in certain aspects of that performance we took our eyes of the ball, it is important we don’t do the same Sunday.”

This Sunday’s game will be officiated by Bradley Milligan of the Cumberland Rugby League Referees Society.

In fact, his first game in the semi-professional ranks was a pre-season friendly between us and the Barrow Raiders in January 2018.

His last appointment to a Keighley match came in late May when he officiated the Cougars 29-18 home victory against the Midlands Hurricanes.

Milligan will be assisted this weekend by touch judges Matthew Clayton (Huddersfield) and Craig Regan (Barrow). The reserve referee is Connor Astbury (Castleford).

Keighley Cougars maintained their 100% start to the new league season with a 4-46 win away at the West Wales Raiders.

In a game surrounded by controversy, the Cougars put in a professional performance to ensure they made the long journey home victorious.

Keighley extended their lead further with another two tries courtesy of Jack Miller and James Feather.

And shortly before half-time, Nathan Roebuck would touch down behind the posts after an outstanding short ball from the debuting Dane Chisholm.

Chisholm then took the game by the scruff of the neck in the second half, first engaging the left edge to present Alix Stephenson with a walk-in at the corner.

A deft kick to the corner then allowed Agoro to pounce for his second with Miller sealing a brace shortly after as he raced in at the corner from the scrum.

Then, despite being a metre short of the line and knocking-on, referee James Jones awarded a West Wales try to Callum Merrett much to the bemusement of all in attendance.

This riled the Cougars however, and they turned the screw once more as Miller sealed his hat-trick before Charlie Graham rounded off the scoring.

Advanced tickets for #CougarPride22 are on sale NOW.