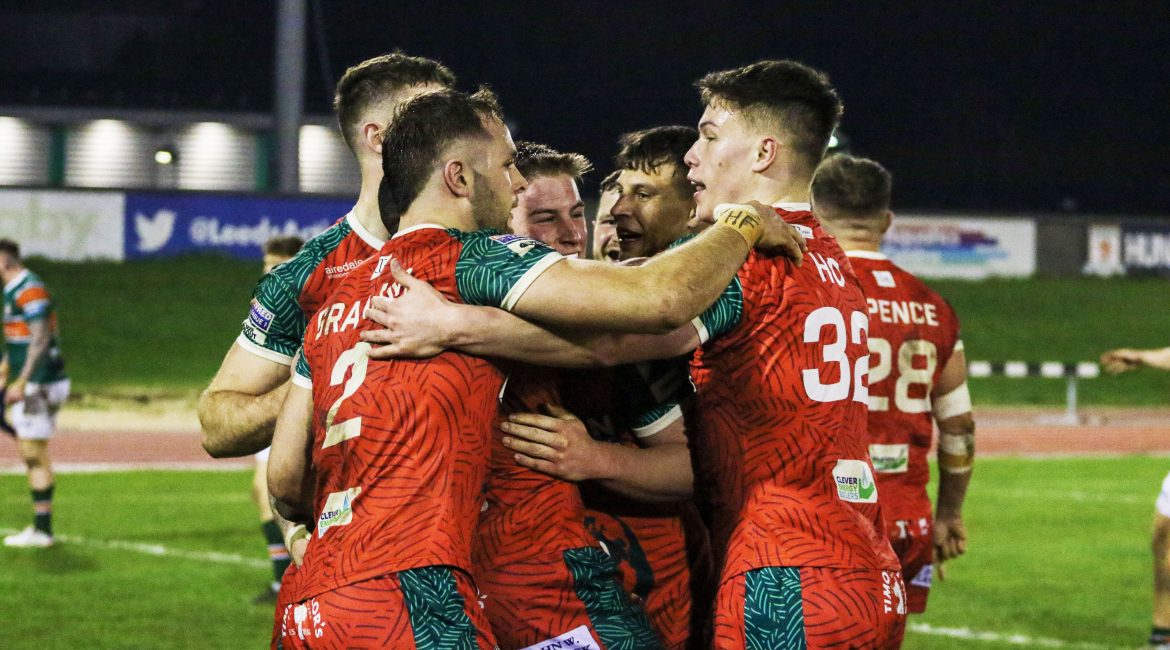 The Keighley Cougars continued their unbeaten start to the Betfred League 1 season as they snatched victory from the jaws of defeat with a 16-20 triumph at Hunslet.

Hunslet raced into an early 8-0 lead through a Joe Sanderson penalty and a try from former Keighley man, Harvey Hallas.

The Cougars though would turn the tide and take a 10-8 lead with Bradley Ho and Charlie Graham both forcing their way over from close range.

However, another penalty conversion from Sanderson would send the sides level into the half-time break.

Keighley took the lead once again in the second half, Jack Miller turning his way through a tackle to ground the ball.

Hunslet though would again level the scoreboard, Wayne Reittie pouncing on a kick to the corner to touch down.

They would then take the lead through the boot of Sanderson, but with 20 seconds remaining Mo Agoro broke the line and dived over to seal a dramatic win for the Cougars.

Swinton Lions fell to their first defeat of the new league campaign, going down 6-13 at home to the North Wales Crusaders.

In a low point scoring game where both sides defences were on top throughout, the deadlock wouldn’t be broken until the half-hour mark.

Alex Eckley would score the only points of the first half to give North Wales the lead, crashing over between the posts from close range.

The second half would follow in a similar vein, with Rhodri Lloyd powering his way over on the back-up of a short ball to the outside from Jack Hansen to level up the scoreboard.

Lloyd would have a second try ruled out for a forward pass, and the Crusaders would take advantage and the lead when Gav Rodden touched down after reacting quickest to a kick.

Both sides would exchange possession back and forth, but the game was settled with mere minutes left as Brad Billsborough slotted over a drop goal to seal victory for the Colwyn Bay outfit.

Head Coach Rhys Lovegrove has made one change to the 21-man squad following last week’s victory over Hunslet.

Dan Parker returns for the first time since January following the completion of his four-game suspension.

He takes the place of Josh Slingsby, who along with teammate Keenan Dyer-Dixon, joined the West Wales Raiders on a two-week loan on Wednesday.

Lewis Young (Hamstring) is expected to return to the side whilst Josh Lynam (Knee) remains Lovegrove’s only long-term absentee.

Swinton Lions Head Coach Allan Coleman has made three changes from the squad that fell to a first league defeat last time out.

New signing Kieran Rush, who joined on loan from the Huddersfield Giants this week, comes straight into the side.

Also coming into the Lions squad are Billy Brickhill, for the first time since the leg injury sustained against the Cougars in pre-season, and Deane Meadows who missed out last weekend.

Jack Hansen, Louis Brogan, and Jordan Case all miss out following injuries picked up in the loss to the Crusaders.

KEIGHLEY COUGARS HEAD COACH RHYS LOVEGROVE: “Swinton are a top-quality team and are showing that already.

“We are going to have to be a lot better than we were against Hunslet to try and compete with them.”

SWINTON LIONS HEAD COACH ALLAN COLEMAN: “Keighley is another tough game for us.

“Keighley are unbeaten, so we have to dust ourselves off after last week because it was unfortunate to lose but we picked up some knocks.

“But we’ve got a squad and it is up to us now to utilise the squad and bounce back.”

In fact, his first game in the semi-professional ranks was a pre-season friendly between ourselves and the Barrow Raiders in January 2018.

His last appointment to a Keighley match came last month when he officiated the Cougars 22-42 friendly defeat to Swinton at Cougar Park.

The Keighley Cougars were defeated 22-42 on home soil by promotion favourites Swinton Lions in their final friendly ahead of the new season.

A disastrous start to the afternoon saw the Cougars fall behind by 8 points inside the game’s opening four minutes after tries from Dan Abram and Max Roberts.

Mo Agoro halved the deficit, but the Lions extended their lead through an effort from Luke Waterworth.

Clever work out the scrum from James Feather moved the Cougars within a converted try of their visitors but Swinton took a comfortable lead into half-time after tries from Richard Lepori and Lewis Hatton.

Lepori grabbed his second of the afternoon shortly after the break, but Keighley’s hopes flickered through a score from Nathan Roebuck.

Jack Hansen would seal Swinton’s victory, taking advantage of a fumble from Charlie Graham, but the final say would go to Keighley as Matthew Bailey crashed over from a James Feather pass.